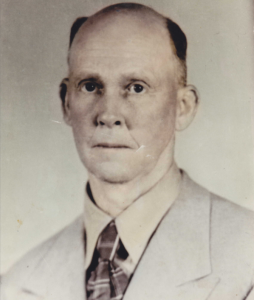 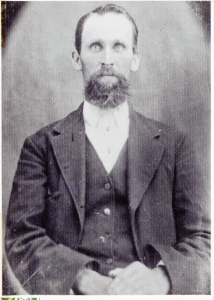 ALLRED, J.B. - {from Prairie Creek} The relatives and friends were shocked when they heard of the sudden death of J.B. Allred about 8 o'clock in the evening. While his daughter, Orpha, was reading to him he quietly passed away while sitting in his chair, almost without a struggle. He had been to Rogers that day and seemed to be feeling unusually well and talkative. J.B. Allred was born in Randolph county, North Carolina in 1843 and died May 13, 1924, having lived to the ripe old age of 81 years, 1 month and 23 days. He was married to Miss Sarah A. Griffith October 21, 1873 and to this union four children were born, three dying in infancy. One boy is living in Checota, Okla. The wife and mother also died. He was again married in 1883 to Miss Anna Gibson and eight children were born to this union and two died in babyhood. This wife preceded him to the great Beyond a number of years. The children were all present at his funeral but Frank, whose address is unknown. Miss Orpha Allred lived with him. Allison Allred of San Antonio, Texas, Oscar Allred of Wichita, Kansas, Clebourne Allred of Coffeyville, Okla.{?} and Mrs. Lillian Allred of Rogers, Ark. He also leaves 16 grandchildren, two brothers and two sisters, His early life after leaving North Carolina was spent in Indiana and Kansas. He moved to Arkansas in 1887 to the farm where he died, having lived there 37 years. He united with the M.E. church at an early age in North Carolina. After moving to Arkansas he united with the M.E. church at Pace's Chapel where his membership remained till death. He lived a consistent Christian life. The funeral services were conducted by Bro. Chas. Edwards at Pace's Chapel at 2 o'clock Friday afternoon. The remains were laid to rest by the side of his wife in the little cemetery near Pace's Chapel to await the resurrection. We wish to extend our heart-felt sympathy to the bereaved children and grandchildren and other relatives. Our whole community will miss him. 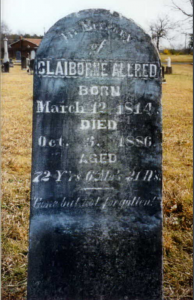 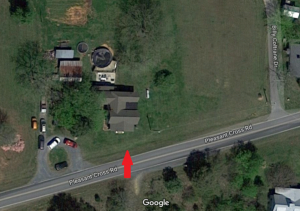 Claiborne raised his family in Franklinville, NC and the house is still standing.   You can visit it on Google Earth or in person by driving to the intersection of Pleasant Cross Road and Billy Coltrane Drive.

There are a lot of conflicting birth and death dates for John Allred floating around the internet and in various family histories and trees.  To add to the confusion, there is a Memorial Marker in the cemetery at Gray's Chapel UMC in Randolph County, NC that has the wrong info and wrong dates.   However, John stated in his Revolutionary War Pension Application that he was born 1764.  John's Estate Papers prove he died sometime in August 1849.  The Memorial Marker was placed at Gray's Chapel UMC in the 1950's by two descendants:  Governor James V. Allred (Texas) and William Mendenhall (California) who left behind journals and letters stating they had searched and searched for John's grave but never found it.  Although they did not know where he was buried, they guessed at the dates (based on info they had at that time) and placed the marker at Gray's Chapel UMC.   Unfortunately, John's grave has not been found but he most likely is buried in the Billy Trogdon Cemetery where his parents and other family members are buried.  This cemetery is located just across the river from the land where John was born, raised and raised his own family.   Click on these links to view information about John, the Billy Trogdon Cemetery and Governor James V Allred. 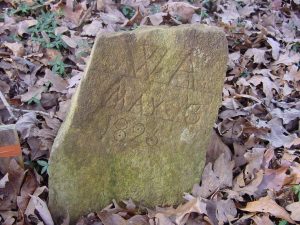 Like his son John, there are a lot of conflicting birth and death dates for William.  To add to the confusion, there is a Memorial Marker at Gray's Chapel UMC that contains wrong information.   As with his son John's marker, Governor James V Allred and William Mendenhall were unable to find William's grave and just guessed at the dates and burial.  However, William's true grave and tombstone were found in the Billy Trogdon Cemetery next to his wife Elizabeth Diffee.   Click on that link and scroll down to view their tombstones.  Unfortunately, the tombstone only gives the death date.  To my knowledge, no one has been able to document when or where he was born.   Based on the birth of his first child, when he first owned land and where his father was living, we can guess he was born around 1742 possibly in Frederick County, Maryland.  Like his son, William was also an American Patriot documented by mention in Tory Colonel David Fanning's journal.  I hope to post that journal, or at least excerpts from it, on this website soon.

William's true birth and death dates are not known but we can estimate based on the when he purchased his first land and the last time he is mentioned in land records.  William's father was living in West Nottingham Township, Chester County, Pennsylvania when he was born (documented by tax lists) and William purchased land in Prince George's County, Maryland where he lived from 1746-1752.  You can read more about William by clicking here.

His father was Solomon Allred
born 1680 Lancashire, England
died after 1730

Solomon birth is documented by a Baptismal Record in Eccles Parish Records, Lancashire, England.   There is a lot of conflicting information about when and where he died but in truth no one has documented anything.  It is all a guess.  He last appears in records in 1730 when he was listed on the West Nottingham Township, Chester County, Pennsylvania Tax List.  He may have died there.  He may have traveled with his son to Prince George's County, Maryland and died there.  He may have followed his children and grandchildren to central North Carolina and died there.  No one knows and no documentation has been found.  You can read about Solomon by clicking on these links 2017 Reunion Presentation  and  2014 Reunion Presentation