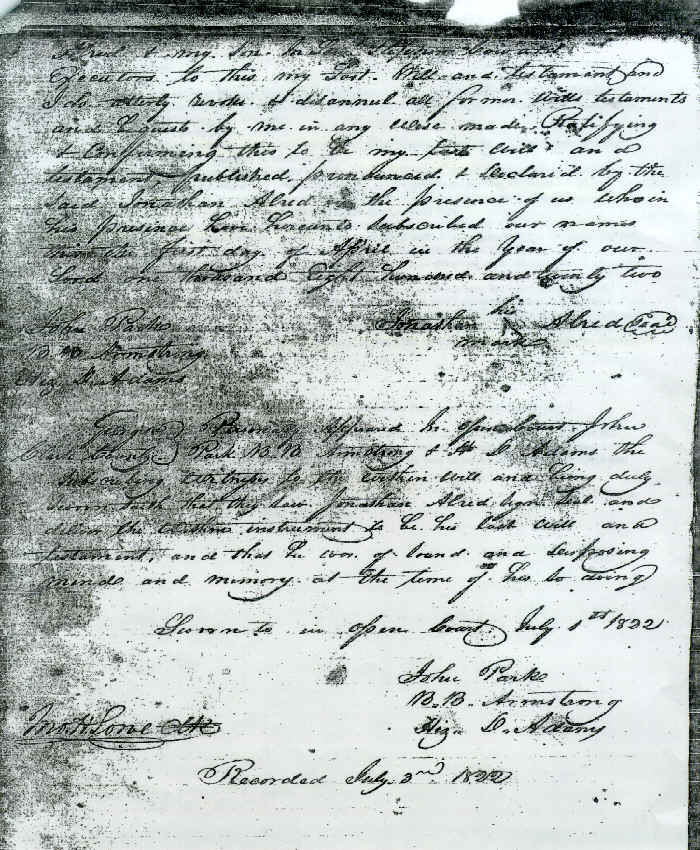 In the Name of God - Amen

I, Jonathan Alred of the State of Georgia and County of Clarke being very sick and weak of body but of perfect mind and memory thanks be to God and knowing that it is appointed for all men to die, do make this my last will and testament in the form following that is to say:

1st I desire all my Lawfull debts be paid

2nd I wish and desire that my beloved wife Margaret Alred shall be possed with all my estate both real and personal which I lend to her during her life or widowhood.

3rd I desire after the decease or marriage of my wife that my son William Alred shall have two negros,one negro man named Tarleton and one negro boy named Hampton. Also I give unto my son William Alred one waggon and three horses, one set of blacksmith’s tools. Also the tract of land on which I now live.

4th I give and bequeath unto my son John Alred one negro man named Tom.

5th My desire is that after the decease of my wife before named that my daughters, to wit, Charlotte Coward, Isabel Stringer, Lavinia Coward and Elizabeth Alred shall be possessed with four negros and the increase therof to be equally devided among them. The names of the negros are Candis, Alston, Ann and Sam.

6th My desire is that the ballance remaining of my estate both real and personal after the decease of my wife be equally devided between my heirs both male and female.

7th I constitute make and ordain my wife Margaret Alred Executrix with my son William Alred and my son-in-law Stephen Coward Executors. To this my last Will and testament and I do utterly revoke and disannul all former wills testaments and bequests by me in any case made Ratifying and Confirming this to be my last will and testament published pronounced and declared by the said Jonathan Alred in the presence of us who in his presence have hereunto subscribed our names this the first day of April in the Year of our Lord one thousand Eight Hundred and twenty two.

Georgia, Clarke County: Personally appeared in open court John Park, B. B. Armstrong and H. D. Adams the subscribing witnesses to the within will and being duly sworn saith that they saw Jonathan Alred sign seal and deliver the within instrument to be his last will and testament and that he was of sound and disposing mind and memory at the time of his so doing.