Sarah Allred's birth, May 31, 1795,  is carefully written on the 2nd line in the family section of the Free family Bible along with the names and birthdates of her husband, William Free, and their eleven children:

Sarah was the daughter of John Allred and his wife, Sarah Spencer.  She was born and raised on the family farm located on the banks of the Deep River near Cedar Falls (Randolph County, NC).

Sarah married William Free sometime around 1815.  The Free (Feree/Ferree) family had been in Randolph County, NC since the late 1700's.  French immigrants, this family had fled religious persecution in France and lived in Germany for about 75 years before coming to America in 1708.  They first lived in New York, then moved to Lancaster County, Pennsylvania.  Daniel Free, William's father, moved to Randolph County, NC sometime between 1775 - 1800, probably following the land grants that were opening up at that time. 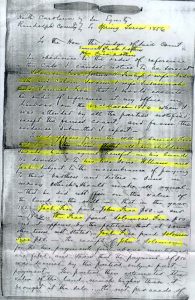 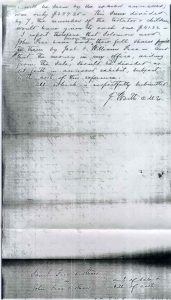 Sarah and William moved to Keokuk, Iowa shortly after they married.  Per estate document filed in Randolph County, NC after William's father, Daniel Free, died, William was still living in Randolph County in 1826.  But, from these same court documents, we learn that Solomon and William apparently had a family feud, fighting over the land and money they inherited from their father.  Could this be the reason, or part of the reason, William and Sarah moved to Iowa?  Transcribed as written:

North Carolina
Randolph County
In Equity to Spring Term 1856
To the Hon. the Judge of said court
Samuel Free and others
VS
John Free and others
In obediance to the order of reference in this case I caused notice to be served on Solomon Free, Joshua H. Fentress and wife Asenath, and Calvin Swaim and wife Susannah, and Samuel Free that I should execute the order of reference at my office in Asheboro on the 22nd March 1856 when I was attended by all the parties notified except ____ the court, and from the evidence submitted I report -
That it appears from the will of Daniel Free that it was his intent that all his children should have equal benefit in his lands. He decreed it to his two sons William and Joel, subject to the incumbrance of paying to their brothers and sisters a sum of money which should make all equal - that he did not fix on the value of the land in the will - that in the year 1822 Joel Free paid John Free $50 and in 1826 William Free paid Solomon Free $50 and it appear by the petitioner that at some other time not stated, Joel Free paid Solomon Free $50. The receipts of John and Solomon for the two payments first above mentioned are filed and show that the payments of $50 was deemed by the parties only a part payment. The parties then estimated the value of the land much higher than it brought at the sale. The net proceeds of as well be seen by the value assessed was only $289.25. This sum divided by 7, then number of the testators children, would have given each one $41.32.
I report therefore that Solomon and John Free have more than their full share paid to them by Joel and William Free and that the money in my office arising from the sale should be divided as set forth in annexed exhibit, subject to the costs of this reference.
All which is respectfully submitted.
J. Worth, CME

When Sarah's sister, Aley, filed court documents in November 1849, Sarah was already a widow and "not an inhabitant of this state" (North Carolina).  Taking these two documents into consideration, we know Sarah and William moved to Iowa sometime after 1826.  As Sarah and William's youngest child was born January 18, 1838 (per the Free family Bible, see top of page), we know William was still alive at that time.  But, sometime between then and August 10, 1849 when Sarah's father, John's auction sale was held, William had died.  Sarah is listed as the widow of William Free on John's estate papers.

At this writing (August 2001) I do not know where William and Sarah are buried, and do not have much information on their children or descendants.  If you have this information and would like to share it with us, please contact me.  Thanks!