Click Here to see an example of the surname changing from Allred to Alldred to Aldred within one family.

The Allred and Aldred families had a common ancestor at least five centuries ago but split in the early 1600s based on the spelling of their surname.

There were three similar family names in church records(1) in Lancashire, England in the 16th and 17th centuries. They were the Alred, Allred and Aldred families. Examination of these records(2) for the parishes of Eccles, Deane and Leigh showed that two of these names, the Alreds and Allreds, were simply variation in spelling and actually represented the same family. At the time, people told the Church Clerk their name and he entered that in the record, based on phonetics. The names Alred and Allred could not be distinguished phonetically and therefore it was up to the discretion of the scribe how to spell the name. On the other hand, the names Allred and Aldred are distinguishable by sound so they could actually represent two different families. The question of “same or different” families has been debated for a long time without resolution.

Then DNA analysis came into being and provided the answer: The Allred and Aldred families had a common ancestor in recent genealogical time. There currently are 53 men named Allred in the Allred Family Tree DNA data base whose Y-chromosome DNA matches each other, all of whom have ancestral ties to Lancashire, England. There are four men in that same data base with the surname of Aldred who also have ancestral ties to Lancashire. Y-chromosome DNA of the four men matches each other and also matches the DNA of the 53 Allred men. This result clearly shows that the Allreds and Aldreds have a common ancestor rather recently.

The next question is, why the different spelling? It could be that the scribe for church records arbitrarily and randomly spelled the name two different ways on different occasions. There are demonstrable instances where that was the case, i.e. where a name was spelled Allred one place and the same person’s name was spelled Aldred in another but those instances are rare. For the most part, it appears that the recording of the name Aldred was specific and deliberate.

This would mean that someone at a very early date after surnames were adopted chose to separate the Aldred from the Allred family. I am assuming this direction instead of the other way around because of the dates the names were first recorded. The name Alred (Allred) was first recorded in church records in Lancashire in Eccles Parish in the mid-1500s.  The name Aldred did not appear in church records in Lancashire until 1627 when Richardus, son of Ricardi Aldred was christened in Deane Parish in September of that year (Note the record was written in Latin). The next entry for Aldred in the Deane Parish record was almost 50 years later when Alicia, daughter of Jocobi Aldred was christened on March 16, 1672. After that there were 32 entries of the name Aldred in the Deane Parish records by 1700.

A similar pattern occurred in Leigh Parish. The surname of Aldred appeared for the first time in church records in Leigh Parish on March 8, 1673 when Richard, son of Gilbert Aldred was christened. After that, there were 21 more entries of the name Aldred by 1700.

There was no mention of the Aldred name in Eccles Parish records in the 16th or 17th centuries. This again suggests that the Allreds and Aldreds were distinct families even though they had a common ancestor not very far back. That is, there were 57 entries of the Alred/Allred name in Eccles Parish in the 1600s but no Aldred entry. If the difference between the two names was due to inadvertent spelling choice in Deane and Leigh Parishes, why didn’t that happen in Eccles Parish?

Subsequent population patterns also indicated that the Allred and Aldred families were two distinct branches of our family. Note the differences in population growth in Lancashire between the two families from 1841 through 1911 in the accompanying graph. 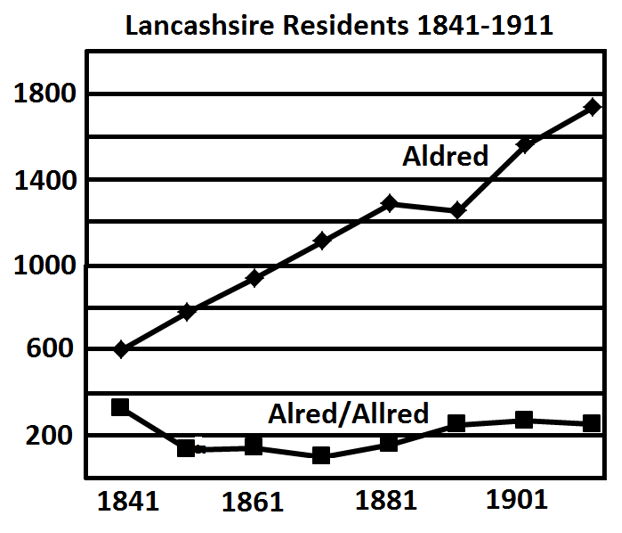 The data presented here appear to confirm that the surnames Allred and Aldred represent two different families and the DNA data show they had a common ancestor relatively recently.

The Y-chromosome DNA of all of the Aldred men from Lancashire in the Allred project with Family Tree DNA match that of the Allred men. There is one Aldred, however, who lists Norfolk, England as their ancestral home instead of Lancashire. The Y-chromosome DNA of this particular man does not match that of the Allred men. In fact, his DNA does not match anyone in the Family Tree DNA data base at even the 12 marker level.  That is a remarkable statistic since the FT DNA database has hundreds of thousands of men representing more than 9,000 family projects!

Further, this Aldred man who represents the family in the Norfolk/Suffolk region of England comes from a different migratory group than the Allreds /Aldreds of Lancashire. That is, the ancestors of the Allred family of Lancashire migrated East out of Africa and then back across Europe to present day United Kingdom. More than 80% of the inhabitants of  Western England, Wales and Ireland are descendants of this migratory group (Haplogroup R). In contrast, the ancestors of the Aldred family of Norfolk/Suffolk migrated west from East Africa to the region of present day Libya. Most of the current inhabitants of Northwest Africa are from that same migratory group (Haplogroup E). Very few are found in Europe and even fewer in the United Kingdom. Census records from the 1800 and 1900s show that the Aldred population in Norfolk/Suffolk area numbered in the low hundreds and hasn’t increased over the past 300 years. Although we only have one man in the DNA data base named Aldred whose ancestors is not from Lancashire, that evidence along with census data strongly suggests that it is a different family than the Lancashire Aldreds even though they share the surname.

Still, until there is DNA evidence to the contrary, it seems safe to conclude that members of the Aldred families in the US share a common ancestor with the Allred families from Lancashire, England.

(1) The CD, titled English Parish Records; Lancashire, Cheshire, and Flintshire, was purchased from Ancestry.com but is no longer available. Further, the CD will run on Windows XP but not on later versions of Windows

(2) John Allred In All The World There Is Only One Family Who Has the Surname of Allred! Allred
Family Organization, Spring, 2021

[i] The CD, titled English Parish Records; Lancashire, Cheshire, and Flintshire, was purchased from Ancestry.com but is no longer available. Further, the CD will run on Windows XP but not on later versions of Windows

[ii] John Allred In All The World There Is Only One Family Who Has the Surname of Allred! Allred
Family Organization, Spring, 2021