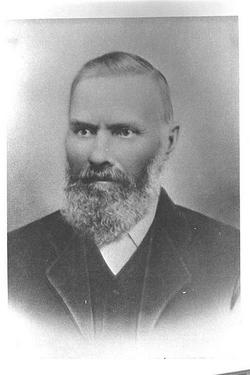 A short autobiographical sketch of the life and travels of William Moore Allred, son of Isaac and Mary Calvert Allred--

As I did not keep a diary, I write this from memory, commenced in St Charles, Bear Lake Co., Idaho, June 22nd, 1885, after I was sixty-five years old.

I was born on the 24th of December, 1819, in Bedford County, Tennessee, fifty miles south of the City of Nashville. My parents were very religious. I believe they belonged to the Presbyterian Church. I never had much chance for an education, and it was very old fashioned at that. I remember of going to sabbath school a few times where I was born and a few times to the camp meetings, but yet I was too young to understand much about doctrine. When I was about ten or eleven years 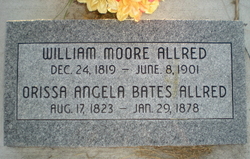 old, my parents moved to Missouri, about five hundred miles north, and settled in Monroe County on the state road in 3 miles of one of the three forks of Salt River. We found this to be quite a different country. Where I was born, I do not remember of ever seeing the snow over six inches deep. Perhaps it would go off [the] next day, and then it would be mud. The first year we lived in Missouri, I think the snow fell in November about two feet deep and stayed on the ground all winter. Towards spring there came a thaw, and then froze a crust on the snow so we could walk on it. As there were plenty of deer in that country (it being new country), we could go out and find the deer, and when they would jump they would break through. The dogs could run on top of the snow, so we could catch them. While living at this place, I killed the first deer I ever killed. I was about twelve or thirteen years old. I remember the first winter I frosted my feet some and could not be out much for a long while. My two younger brothers, Reddin A. and Reddick N. (twins), had no shoes, and my oldest brother John E. would bring in wood for us. We would spell and read, and that was the way the twins commenced to learn to read. If I remember right, I was the first school teacher they ever had, and that was the first school I ever taught, and the only one; only two scholars.

I think in the fall of 1831 I first heard of the people called Mormons (Latter Day Saints). Hyrum Smith and John Murdock being the first I heard preach. While living at this place, Father went out one day and killed two deer before breakfast. When he came home, there was a man with his family there just moving into the country by the name of Bell. When he saw the two deer, he said with an oath "Allred and Bell shall never go to hell."

In 1832, George M. Hinkle, Daniel Cathcart, and James Johnson came along and raised up a branch of the [Latter-Day Saint] church called the Salt River Branch. I was baptized in Salt River on the 10th of September 1832. There were 19 baptized that day, including my parents and one or two of my sisters. The gathering place for the Saints was in Jackson County, about two hundred miles west of here.

In 1833, the church was driven from Jackson County. My father had sold his farm to move up there, but when he heard they were driven out, he rented the farm that the man had that bought his. He changed houses and stayed there one year. While living here, I first saw Joseph Smith, the Prophet (in 1834), as he was going up in what was called Zion's Camp. (While living here, my Brother Harvy, when he would laugh his mouth would draw around to one side. Father sent for the Elders and he was healed immediately).

We then moved to Clay County, I think in 1835, where the Saints had settled after being driven from Jackson County. I think we lived there one year, in 1835, and the people became so hostile we had to move to Caldwell, an adjoining county; a still more thinly settled country (1836). Many of them, I presume, were out laws that had fled from other parts. We lived there about two years and was getting a pretty good start; broke ground in Far West for temple in 1837.

My father had quite a large family, in all nine boys and four girls. The oldest girl died before I was born. We suffered considerably from persecution and exposure. Persecution still increased, and finally Governor Boggs ordered out the militia of the state against us. I was in pretty much all the campaigns and troubles. In 1838, I went with a company to assist a settlement that was besieged by the mob in the town of Dewit on the Missouri River in Carroll County. We arrived there in the night, and it was decided to go and attack the mob that night.