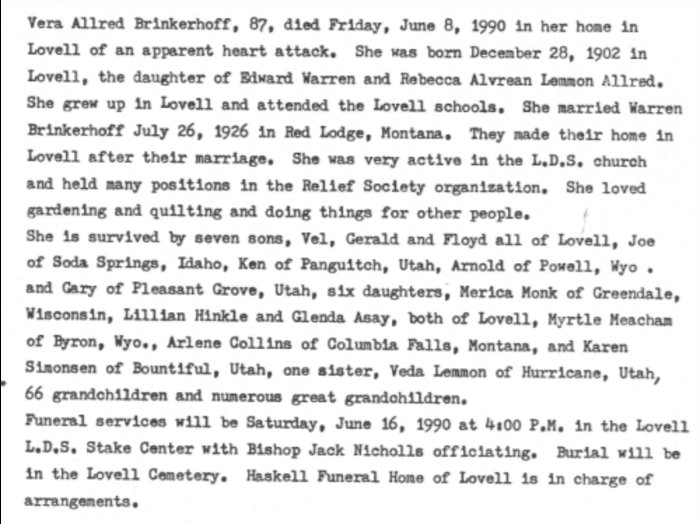 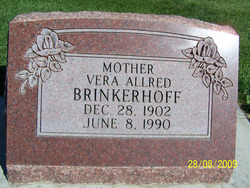 In Vera's own words she stated that her parents went to Wyoming from Southern Utah because of drought and because her father's brother and mother were already living there.

Vera remembered, "We traveled in a covered wagon, mother and five children rode white father walked. (Mother was pregnant with me at the time.) Along the journey, one day, something startled the horses and they began to run. Father tried calming them and running after them. When he realized that he couldn't catch them and mother was in trouble, Father fell to his knees and said, 'Dear Father, please save my family." Suddenly the horses stopped and no one was hurt. They reached Lovell, Wyoming in June and I was born on December 28, 1902.

Since some of the older brothers and sisters worked away from home, I helped father in the fields. After harvest one year he gave me $10.00. I was delighted and sent away in a catalog for a coat and skirt for myself, and a potato masher, egg beater, 4 loaf pans, and some curtain rods for my mother (before this our curtains were put up with string). All this for $10. I was delighted.

We grew and stored our own food. Mother made most of our clothes so it wasn't a surprise to have our panties made from old flour sacks. The printing on the sacks didn't wash out and we would tease each other that our panties said, "Snyder's Special" or "Money back if your not satisfied".

I was a fast runner and always ran the races on the 24th of July. One holiday dad gave us each 50 cents to celebrate the day. I lost mine down the crack in the board sidewalk. I crawled down under but never found it, so I won some races and earned my money back.

I wasn't afraid of spiders, mice, or little water snakes, but Chasty my sister was afraid of everything. I would chase her with a mouse holding it barely above her hair. She would holler "Vera, I'm going to kill you". We had a lot of fun in our family. We were very musical, we played ball games, swam in the canal and river, and danced.

I met Max Shields at a dance and we were married Nov. 22, 1922 by H. Cash Carlton. My first home as a wife was a tent, then into an little shack, where my first cupboard was a box nailed to the wall. Max was not a member of the church and over time we were incompatible, later we divorced. We had one child, Maxine. My little daughter and I lived with my parents.

When our neighbor's wife Josephine Clark Brinkerhoff died, the whole town mourned her passing. I remember the hearse going through town on Christmas Eve amid the shoppers. I helped my widowed neighbor and his daughter with the large family. We canned, baked and sewed. Josephine left him with 11 children; six of whom still lived at home. This name was Warren Brinkerhoff and we were married in July of 1926. He was 18 years older than me. We had ten children of our own. All of our children were born at home except for the last two little girls, they were born in a hospital costing $35 each. We had lots of good times, and some bad times.

Total, Warren was the father of 21 children. He died on April 1 , 1949. Our farm was not paid for and we had no insurance but the children all pitched in and we made it work. Three of my sons filled missions and all are sealed in the temple. While Warren was living we were never sealed in the temple, so 37 years after his death our family made the decision to be sealed in the Salt Lake Temple by Elder H. Burke Peterson on April 3, 1986. I had lost my oldest daughter Maxine and my son Ellis. Ellis's wife Maxine stood in for my daughter Maxine, and my son-in-law Chris Simonsen stood in for my son Ellis. My step-son Lavel Brinkerhoff stood in proxy for his father, my husband Warren. It was a wonderful day, now all my children and I are sealed for eternity."

Singing was important to Vera. She loved to hear her children sing and insisted upon it whenever there was a get-together. She had a beautiful alto voice. Gardening was a great joy for her. She enjoyed giving produce away, canning and working with plants. She had boundless energy. You could always get something to eat at Vera's. Her children would tell you that if she asked for something to be done, it should have been yesterday. She was stubborn and determined; she had to be.

Vera Allred Brinkerhoff lived a long and fruitful life. She was a stalwart to her family keeping them close to her and each other. There was a lot of love in her home. She passed away on June 8, 1990 at her home in Lovell, Wyoming. She is interred in the Lovell Cemetery next to her husband Warren and his first wife, Josephine Clark Brinkerhoff. -autobiographical with additions by Glenda Asay and Karen Simonsen, her daughters.