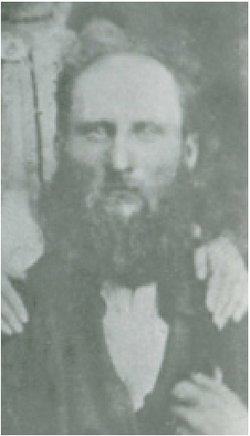 “Played the violin some. Sometimes played for dances. Has gone to Black Rock, Millard to play, and other places such as Juab, as well as playing in Deseret. He was left a widower at 25. He wore wooden shoes during winter after coming to Deseret. Butler attended his school. In Jan. 2, 1906 he went on a three month stake mission, Millard Stake. He spent his time on the east side in Holden and other places. On May 20, 1906 he was ordained a high priest by Orson F. Whitney.

The last few years of his life he suffered with Brights disease. In Nov. 1910 he was asked to go out to the north, to what is known as Woodrow to appraise some damages. He went in a buggy, it was a cold day, not taking any wraps he suffered with the cold, so that I think, hastened his death, for he soon took to his bed. He lay in bed all day, thinking, Thanksgiving day, Nov. 23 or 24 he had a stroke or convulsion and that night had a very bad hemorrhage. The Dr. remained at the house all night. I sat up with him. Alpine was there too. On the morning of the 25th we decided to take him to the L. D. S. hospital. About his last words to me were, “I love you my girl.” This was while on his death bed.

A few minutes before being taken away I heard him for the last time bear his testimony to the divinity of Joseph Smiths mission. He said humbly and sincerely, ‘I know Joseph Smith was a prophet of God.’

He died Sunday at 12;25 p.m. Nov. 27, 1910 at the age of 69 years 8 months and 10 days. While he had quite a large family, 14 children most them passed away before reaching maturity, so his decendents do not number as many as some pioneers descendant do. Up to date there have been born through his lineage 52 souls, 29 males 23 females.”