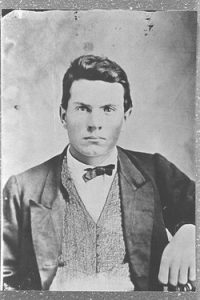 1-SAMUEL ALLRED, the son of Isaac and Mary Henderson Allred, was born 3 June 1851 in Pottawattomio Co., Iowa, at a place called “Pidgeon Hollow.” This place was 15 miles south of Council Bluffs. His birth occured while his parents were crossing the plains with the Saints, after they had left their homes at Nauvoo. His father was a Captain of 50 wagons. They arrived in Salt Lake city in Aug. 1851 and later settled in Kaysville of Kaysward. In 1855 the family moved to Slatterville, Weber Co., Utah, where they lived until 1858, when they moved to Ephriam, Sanpete Co. In 1859 they moved to Mt. Pleasant and were among the earliest settlers there. Isaac Allred, the father of Samuel, was killey by Thomas Ivey. The family was very poor and they were obliged to make sacrifices. Food, as well as everything else, was scarce. Many mornings Samuel left without breakfast to search for the days food from the earth. When his Father left on a three years mission to England, his women were left in covered wagons with their little ones to care for and with little food or supplies.

Later the family moved to Spring City to live. The only school that Samuel ever attended was taught by his Mother, the later by Samuel Aikon.. His first book was the old blue back speller: later he used the Mc Duffy reader. He was baptized 3 June 1860, by Wiley Payne Allred, and also confirmed by him. When he was 17 years old, he left home to earn his living. He first went to Nephi and from there to Chicken Creek, where he succeeded in getting a job with a Mr. Tidwell, a relative who had a ranch there. Here he labored for two years. With a pick and shovel and wheelbarrow, he succeeded in making the first Chicken Creek Dam.

Even at 15 years of age, he was dependable and trustworthy. He was put to running the Pony Express from different parts of the country. Often he ran into Indians and shots were exchanged. But he learned to circle their camping grounds, and going across country and thru fields, he delivered the mail and express. He served in the Black Hawk War from 1866 to 1867, in the cavalry, and took part in pursuing the Indians when they raided Spring city 13 Aug. 1867. He received a pension form the Gov’t for these services. With others, he helped in hauling the first rock used in building the Manti Temple. For three winters he hauled rock and lumber to the Temple from the canyons. He also made two trips to take men to work on the St. George’s Temple. He was blessed with natural ability in setting bones, assisting the sick, pulling teeth and even amputated diseased or mangled limbs, using the needle to sew the wounds up of his patients.

2-He served time in the penitentiary in the year 1888, for having two wives, but was released before his full time was served because of good behavior. At 18 years of age, he served as a ward teacher and continued in this capacity for 48 years. At 30, he was set .apart as a Counselor in Sanpete M.I.A. presidency and served for 20 years. He served as an alternate in the High Council for 2 years, then as High Councilman for 8 years. He was made Ward Bishop in 1913 by Apostle James E. Talmadge and he occupied this office until 9 Sept. 1928. As a member of the Old Folks Committee he served 34 years. Was a member of the Board of Health and Councilman for four years. He married Elizabeth Diantha Allred, the daughter of James Tillman Sanford Allred and Eliza Bridget Mainwaring, who was 25 March, 1852, in Manti. They were married 19 Sept. 1870 in the Salt Lake Endowment House. They had eleven children as follows:

Samuel married Isabell Blain, the daughter of John Blain and Isabell Graham, who was born 3 May 1860 in Carlyle (Carlistle) England,.They were married 18 Nov. 1880, in the Old Salt Lake Endowment House. Children:

Samuel died 19 Jan. 1932 at Spring City, Utah and was buried 22 Jan. 1932 at that place.leaving a posterity of eight living children. Grandchildren and 11 great grandchildren.