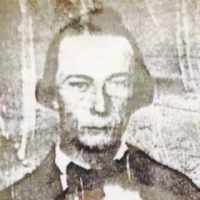 Richard Anderson Ivie was the oldest son of James Russell Ivie and Eliza McKee Faucett. He was born February 10, 1825 at Shelbyville, Bedford County, Tennessee. In 1832 his parents were converted to the Gospel of Jesus Christ 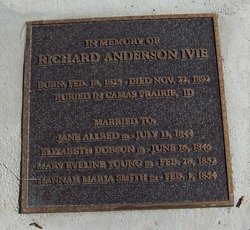 of Latter Day Saints and moved to Kirtland, Ohio. From there his history was entwined with his family and the Church as they moved from place to place and as it seem continually Westward, ultimately arriving at the Indian Agency at council Bluffs, on the Missouri River on June 14, 1846 with a large group led by Brigham Young. On June 16, 1846 he married Elizabeth Dobson who was born on April 6, 1825 in New Roseville, Buttler County, Ohio. Elizabeth was well educated and come from a wealthy family. He joined the church against her families’ wishes and when she married Richard Anderson Ivie in Council Bluffs, Pottawattamie County, Iowa; they disowned her.

The newly weds made their first home in a covered wagon and had just settled in when news arrived about the War with Mexico. The Saints were asked by the United States Government to provided 400 to 500 able bodied men to serve in a Battalion to march into California and take possession of that territory. Richard Anderson Ivie was called to serve with this group, however, after a family council it was decided that his father, James Russell Ivie would go in his place. So on the 16 of July 1846 the Battalion returned to Iowa in time to leave with the Pioneer company that left from Elkhorn on the Elkhorn River on June 1, 1848 and arrived in the Salt Lake Valley on September 24, 1848.

Richard had three other wives in plural marriage: Milinda Young, Miltilda Young, and Sarah Emily Young. He moved to Camas, Idaho with one of these three. He died and was buried there on November 22, 1892.