Oliver Tillman Allred "Gone Golfing" Oliver Tillman Allred, age 95, made his final putt on the earthly 18th green Friday, September 16th, 2005. Oliver was born January 5th, 1910, at Whiterocks, Utah, to George Quayle Cannon Allred and Mary 'Mamie' Elmer. Married his sweetheart of 62 years August 3rd, 1933, at Vernal, Utah. Retired after 26 years working for the State of Utah as a Boiler Technician at the Utah State Capital Building. Oliver was an avid golfer. He was an ordinary man who quietly went through life doing extra ordinary things. He lived a life of service to others, with a helping hand to his family and friends. He will always be remembered for his strong devotion and loving friendship. Oliver was preceded in death by his wife, sisters: Myrtle Irene Henrie, Mamie Pauline Allred, and half sister Elmira Aurelia Roberts, brothers: Lindon Cloy, Austin Quentin, Raymond Cleatus, Delos, Roland Dee, Wendall, Warren and his half brother: Fenton Doyle and Rex 'N' Allred. Survived by the youngest brother Earven 'Q' Allred of Ogden, Utah, and numerous in-laws, nieces, nephews and cousins. Graveside services Saturday, September 24, 2005, at 11:00 a.m. at Larkin Sunset Lawn, 1950 East 10600 South, Sandy, Utah. Condolences may be sent to www.celcbratinglife-ut.com. What a joy it has been to share part of your 95 years. 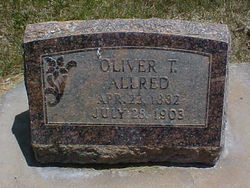 Oliver Tillman Allred was the fourth child and second son of James Tillman Allred Jr. and Christena Anderson Allred. He was born April 23, 1882 in Spring City, Utah. He was reared, along with seven other children in a faithful Latter-Day Saint home. He was baptized April 23, 1890. Oliver was honest and obedient. The children in the family were all kind and considerate to each other, even though they lived in a very tiny home without the conveniences of modern day.

Oliver started school in Spring City when he was six years old, but due to his poor health he failed to attend regularly. When he was quite young, he had spells with his stomach and would have to have it pumped out to relieve his suffering. He had faith in the lord and was always desirous of being administered to when he was ill. He over came that illness as he grew older. In his youth he was well liked be his boy companions as well as his girl friends.

He left home as a young man to work in the Delemar Mines in Nevada and when he was 17 years old he worked at the Kimberly mines in Delta, Colorado where he became “leaded” an illness from which he never fully recovered.

While he was working in Colorado, Oliver’s mother sent for him to make a trip to Canada with his father. They wanted to visit his brother “Q” who had moved there to homestead. Oliver’s Father Tillman had not been well when they undertook such a journey, he became worse on the trip and passed away in Canada at his son Q’s home. Shortly after Tillman’s death, Q’s wife Lena became very ill herself and returned to Utah to live. Later Q left Canada and came back to Utah to be with is family. They came to Spring City to help run his father’s farm. This left Oliver with the job of returning to Canada to help dispose of the property there.

After Oliver returned from Canada in January of 1903, he wasn’t well and passed away July 29, 1903. He passed away from hemorrhage of the lungs from working in the mines. Oliver was always thoughtful and considerate of his mother, more so than any of the children. So when he passed away it was very hard on his mother and it had only been one year since her husband died. Oliver was twenty one years, three months and five days old. Services and burial were held in Spring City, Utah July 31, 1903