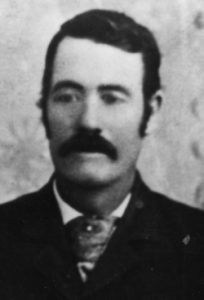 Martin Warren Allred was born in the very small town of Spring City which was one of the first settlements the early Allred family resided. In fact his father, Andrew Jackson Allred and grandfather James Allred played a very important part in the settlement of Spring City. His life was probably about the same as any small boy raised during this period of history. He spent a lot of time herding cows among the Indians.

His father was a very noted Indian interpreter thus being the reason they lived among the Indians most of their young life. Weeks went by at times that they never even seen a white person. This didn't seem to matter to the children as they had seven children in the family. After their mothers, Chloe Stevens death on 22 Oct 1872, their were two more added to their family. And then upon her death Andrew Jackson Allred had two children by his third wife, Martina Nielson Anderson. Marin had left home by now and was married to his first wife, Minni Martin Sorenson (b. 17 Jun 1869 Gunnison, Sanpete UT to John Sorenson and Kristine Sandersen) of which they had four children born unto this union:

David Silas died when he was only 28 days old and his mother died on 22 Dec 1892 from complications due to childbirth. This left Martin as widower with three small children to raise, his oldest child Emma being only six, Daniel four, and Dora two. This placed quite a responsibility upon the shoulders of Martin for the next year, until he married his second wife, Henrietta Jensen on 2 Sep 1893. Then on the 18th of Oct 1895, a little over two years after his marriage to Henrietta he went to the Manti temple for his endowments and had Minnie and Henrietta sealed to him on that date. Also on that date all four children by his first wife were sealed to him. Martin did not have any children from his second marriage at the time they were sealed, but later had 10 children, 7 girls and 3 boys. They lived in Emery County until about 1913 then moved to Altonah, Duchesne County where he lived the remainder of his life farming. Martin Warren Allred passed away on 10 Mar 1945 at 5:05 pm at an age of 80 years 8 months and 25 days.