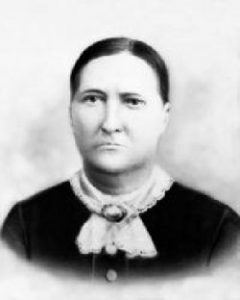 On the 6th of Aug. 1814, just 121 years ago, was born in Simpkins (Simpson), Co., Kentucky, a little brown eyed dark haired girl. This baby was the daughter of a slave holder who owned a plantation and slaves, James Butler and Charity Lowe Butler. She was given the name of Lucy Ann; perhaps, if her ancestry could be traced far enough, we would find she had some of her progenitors names.

Little is known by me of her life, either as a child or as a woman. She grew to a fine specimen of womanhood, and when a few months past 22 years of age, became the wife of one of the frontiersmen of that section, Reuben Warren Allred, Sr. Their marriage took place Dec. 4, 1836. The place is not known (Ray Co., Mo.) She became a member of the Latter Day Saints faith before her marriage, thereby entitling her to the blessings. After their marriage, they were later married and sealed in the Nauvoo Temple.

She, with her husband, moved from place to place and they were driven by mobs from state to state - one state to another by mob violence. While living in Nauvoo, four of her nine children were born. Nancy Cynthia was the oldest, she having come to dwell in the flesh Jan. 20. 1840. Nearly fourteen months later, her first son was born; the date of his birth being 17 March, 1841. He was named Thomas Butler, for one of grandmother’s brothers. When he was a baby, he was very ill. Lucy Ann, named for her mother, first saw the light of day 24 April 1845. One day grandmother was going for a bucket of water. A mob came and refused to let her go. She, being a large, strong, woman, picked up a stick, wielding it while saying,. “My children shall have water to drink.” She forced herself through the crowd and got the water, and they yielded to her.

Then on June 9, 1848, her fifth child and fourth daughter, Druzella Emmeline, was born. Soon after, in the spring of 1849, grandfather and grandmother left for Utah by team, with their five small children. Two months after their arrival in Utah, a second son was born in S.L.C. - date of birth 9th Dec. 1849. He was christened Reuben Warren for his father. The following Jan., grandmother was bereaved of her 2nd daughter, Hannah Caroline. She, at the age of 6 years, was buried in S.L.C. 20th Jan., 1850. Perhaps, we can draw a picture of her home and surroundings during the birth of a son and death of a daughter. It could not have been so pleasant and comfortable as the homes today.

About this time Rachel, the Indian girl, was brought to her for rearing and guidance. She was the same kind of mother to her as she was to her own offspring. During the years of persecution in the states, and through her pioneering in S.L.C., Sanpete and Utah Counties, she was in all these times patiently and willing to do all for her family and church. Eliza Elvira was born in Spring City Mar. 10, 1853.

Owing to Indian troubles, they were compelled to move several times, to different towns in Sanpete Co. While a resident of Ephraim, a son was born, who was given the name of Ephraim L. f or the town. He, being the first male child born at this town. His birth occurred the 1st of Oct. 1854. All through these years, they suffered hardship and privations. In order to better their condition, they moved to Spanish Fork, locating near Utah Lake. While living here, she gave birth to a fifth son and youngest child. He was born the ninth of Feb. 1857, and he was christened John L., a Butler family name.

Grandmother, for years, went out among the sick, ministering to their wants and alleviating suffering. She brought many children into the world. Some of her simple and often effective remedies are still used by me and often others of her grandchildren and even her descendants and they have cured many cases of illnesses. Her first home in Spring City, was a large log room with a rude rough porch on the east, but no doubt much appreciated by all, as they were yet pioneers and possibly as good a home as most other pioneers had at that time. Later, a better home, made of rock was built for her comfort and convenience.

Life was not without its crosses. On the 19 June 1888, she was called to part with her beautiful 20 year old daughter Druzella Emmeline. She died at the birth of her 2nd child. Grand-mother bore this trial with courage, as she had her many others. Nearly two years before this, a daughter-in-law, wife of T.B. Allred, died of child birth. Immediately after, father and his 21 month old son, T.B. Jr., known at “Butler”, made their home with his or her father and remained there until he married mother (Catherine Delahay). Butler was beloved and raised as her own child, remaining there for 18 years of his life or until her death. Both her and grandfather, were always kind and considerate of his welfare, as much so, as their own children’s.

Her daughter Cynthia, two younger sons, Ephraim and John L., moved from Sanpete Co. to Deseret. She and grandfather sometimes visited them. During one of their visits to them, and while she was at her granddaughter, Nancy Black Peterson’s home, she became ill with what they pronounced as congested chill, - perhaps, would now be called pneumonia. Dec. 1884, at the age of 60, she died. My remembrance of her is very meager, as I was only a few months past four at her death. The only outstanding thing, was that part of her burial clothes. I was held up to take a last look at her. I remember this very clearly.

A rare woman of faith and integrity had passed to her well earned reward. Father went to Deseret, after being notified of her death. Her remains were brought back to Spring City for burial. A friend of mine, Minnie Bishop Moody, told me of the meeting of Aunt Cynthia and father. As he came up to her, she was standing on the porch of her home, with her apron up to her eyes weeping bitterly.

Her children all were happy and thankful to call her mother and honored her and appreciated her. She was kind and devoted to her family and they knew of her utmost worth. She rests in peace and has earned the reward promised the faithful.

Sister Lucy, I lay my hands upon thy head in the name of Jesus Christ, for and in behalf of thy father-in-law, James Allred and place a father’s blessing upon thee.

Thou art a daughter of Abraham and of the same lineage with thy companion, and a lawful heir to all the blessings and priesthood that were sealed upon the sons and daughters of Joseph. In common with thy husband thou shalt have faith to heal the sick in their house by the laying on of hands.

Thy children shall grow up about thy table like olive plants, and thou shalt be blest with all things necessary to make them comfortable and happy, and the destroyer shall not have power to take them from thee. Thy brother shall return to thee with unspeakable joy.

Thou shalt receive an endowment in the house of the Lord with thy husband and receive power to redeem thy father’s house back to where they died in the gospel, by the help of thy companion and friend. Thou shalt also assist thy husband in doing all the work of that nature which he desires.

Thy posterity shall become very numerous and none shall excel them for wisdom and skill in their generation. No good thing shall be withheld from thee. Thou shalt enjoy every blessing which is sealed upon the head of thy companion in common with him to all eternity. Be patient and no power shall take it from thee. Even so. Amen.