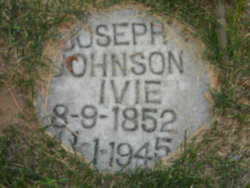 When I was ten years old I was left to shift for myself. I packed mules, drove bull trails, rode broncos, and engaged in cattle raising.

There were probably thirty families in Provo when I was a boy. I can remember seeing many emigrant trains going through Salt Lake on their way to the coast. My uncle James R. Ivie had eight sons and was instrumental in protecting the whites from the Indians and in opening up new settlements in Utah. In 1862, he built a mud wall fortress at Ephraim in the San Pete Valley. Mt. Pleasant was settled by him.

I was in the mining towns of Nevada and Montana. I worked for a man who freighted from Salt Lake City to Virginia City and Montana. He had 64 bull teams. We got snowed in on the Snake River in Idaho in 1864. We lost all our stock except one small mule which survived by eating tree bark. Flour brought fifty dollars per hundred at the mining camps.

The Mormons were organized into bands of Minutemen for protection against the Indians. I was a member of these organizations and engaged in many Indian Battles.

I have been on the ground where the Gunnison massacre took place. We had an Indian in our camp who boasted about the massacre stating that he took part in it. One of the companies seized my six shooter and shot him and threw him in the river.

I rode broncos for two years while in a company of Minutemen. I underwent many hardships and dangers. I thought I had to do what I was told to do, as I had from ten years of age been taking orders from other people. I took hazardous chances which I would never take again. Old John and Cannotch were two of the Ute chiefs against whom I fought.

I bought and sold cattle all over the state of Utah and was well acquainted with every town in Utah. I made three stakes and lost them. Buyers for cattle came from Idaho and Montana.

There were three organized bands of horse thieves in Nevada. There were three in Montana, too. Each band was composed of from twelve to fourteen men. They were brazen and would many times drive off the cattle in the presence of the owner.

Jim Locke’s band robbed the stage at Pleasant Valley. On one side was an aspen grove, on the other side was a large rock. They robbed the Wells Fargo stage there on three successive nights, and got $64,000 in the robberies. They got $3,600 from a China man.

The day after the robbery the soldiers went to the scene of the robbery and found Locke’s vest hanging on a nearby tree. The soldiers followed the trail of the robbers but could not catch them as they had too many fresh horses. Slade, the sheriff, belonged to this gang. The Slade-Locke gang were bushwhackers from the states. They would go to the ranches in the day time and take their horses while the ranchers looked on. The Mormons were given credit for robbing the stages and stock thievery which was done by these gangs.

The George Ivie’s gang were hanged. They had robbed the train the day before at Virginia City. When Ivei was asked if he had anything to say before he was hanged, his reply was, “Hurrah for Jeff Davis,” and then he jumped off the scaffold. Ivies made the request that his horse be placed in good hands, and that the horse’s name not be changed. He got the horse from an emigrant train going to Oregon. It was stolen.

It was in 1866 when I became a member of the “Minute Men”. That famous “Rough-and Ready” troop of Indian fighters who were always the first ones on the scene of an Indian raid where it may be.

I was just thirteen years old at the time, and was very proud of myself, because I deemed it a great honor to be a member of the Minute Men. I was a member of this company for about two years, during which time I was one of the six who acted as scout for the main company.

I remember an incident that occurred not long after I became a scout. The Indians raided the town of Scipio, Utah. My uncle, James R. Ivie, among many others, was killed in this raid. When the Indians turned to flee, they took with them 240 houses, 6 mules, and about 800 head of cattle. The Minute Men were on the trail immediately. When we first sighted the Indians driving the stolen stock and beat a hasty retreat, Will Ivie and I remained to hold the horse herd while the Company went in pursuit of the Indians.

Darkness settled down and still the Company did not return. Will Ivie, being no older than I, was just excited over the skirmishes with the Indians as was I. Consequently, when we observed two dark objects appearing out of the darkness, our first thoughts were Indians! Will grabbed for his rifle and whanged it into the night. I yelled for him to quit shooting, because upon moving forward the dark objects were more discernable. Behold! They proved to be a yoke of gentle oxen belonging to a neighbor who lived a short distance down the valley.

The shot brought the Minute Men Company on the run. Upon observing the situation, the entire Company burst into uproarious gales of laughter. There was an immense amount of friendly banter and ridicule heaped upon the shoulders of my cousin and I, for mistaking the brisket of a domestic bovine for a Indian War Bonnet. But there was no laughter forthcoming from the Oxen’s indignant owner upon discovering that his best oxen had been wounded. Needless to say, from then on we were more careful where we directed our bullets.