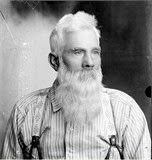 John Jones Allred, son of William Allred and Sarah Ann Warren, was born September 1, 1821 at Bedford Co., Tenn. Little is known about his youth. On the 4th of Sept. 1845, he married Jane Hoops who passed away just six years later, Oct. 20, 1851, leaving him with two small daughters. A son and daughter preceded their mother in death.

It was at the family home in Smithville, Missouri on Sept. 23, 1852 that he married Mary Young Bridgeman, daughter of Robert Bridgeman and Polly Davis Bridgeman. To this union were born ten sons and seven daughters. Six of the children died in infancy.

With his family, he arrived in the Salt Lake Valley Aug. 16, 1861, having crossed the plains by ox team and covered wagon under the valley, he was called to southern Utah. This move was made with some reluctance because the garden which they had planted was not quite ready for use when they had to leave.

Life in their new home was one of hardship and sacrifice. Afflicted with rheumatism, John Jones was not able to work. His wife and children were compelled to do the farm work in order to sustain themselves. Often times, their store of provender was very low.

During the years that John Jones lived in and around Shonesburg, (Washington Co., Utah), he was the only doctor in the region. He was not a medical doctor but very good at healing. Often he was away from home for a week at a time, caring for the sick. The family, who anticipated his homecoming with a bit of food or some other payment, was often disappointed. Many times he received no payment at all because the people whom he served had nothing to give. It would be difficult to say how much suffering was relieved, and how much comfort was given by this kindly old doctor, who set broken bones, pulled teeth, applied mustard plasters, and in numerous ways gave comfort to his patients.

For tome time he served as superintendent of the Sunday School. He was a member of the High Priest’s Quorum; always paid an honest tithe and was very strict in his observance of the principles of the gospel.

He was an ardent admirer of the prophet. He loved to tell about watching Joseph play baseball, or ride his fine horse about the streets of Nauvoo.

The Allreds moved to Hatch, Garfield Co., Utah where on March 16, 1898, John Jones Allred departed this life. Those who spoke at his funeral, told of his honest, integrity and devotion to the Gospel.