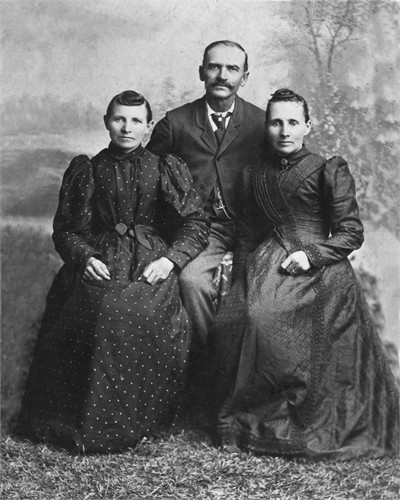 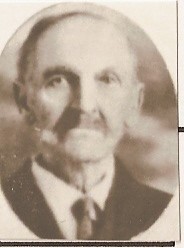 James W. Munson was born 29 Sept 1843, in Svenstruo, Denmak. His parents were Lars and Christina Jensen Munson. He joined the Church of Jesus Christ of Latter Day Saints in 1853 and with his father, mother, grandmother, and three sisters left his native land for the gospels sake. After many weeks of hardships on the water they landed and made their way to St. Louis, Missouri. Soon after arriving there, cholera broke out and within a week, his father, grandmother and two sisters died. 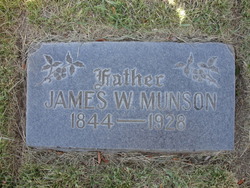 With his mother and one sister, Caroline, he continued his journey enduring all the hardships incident to travel in those days. He arrived iv Salt Lake City in Sept of 1853. Food was scarce and many times they did not taste bread for weeks, but lived on wild roots and herbs.

When James was twelve years old a married brother, Peter Munson and his wife, came from Denmark.

At this time James was living at Provo and he journeyed to Salt Lake to see them. When he arrived at his sister’s place, barefoot and in ragged clothes, he was ashamed to see them and hid behind a curtain. When she sow his destitute condition, Diantha, Peter’s wife, made hin a pair of trousers and a coat out of the covering of a feather tick, and two shirts from some hickory. He often made the remark, that he was the happiest boy in the world when he returned to Provo with his new clothes.

In June 1859 he and his mother moved to Ephriam, Utah. Here she continued her weaving and he hired out to James T. S. Allred for whom he worked for several years.

In 1861 he went with ox team to Council Bluffs to help immigrants to Utah. From this time until 1863 he made many trips East for the Church in this connection. All his earnings during this time, with the exception of the clothing he wore, he donated to the Church.

In Feb 1864, together with his brother Peter and father-on-law, he was called to move to Sevier River where they settled in Circleville, Piute Co., Utah.

On 16 Aug 1864 their first son, Willard was born. He died of measles on 3 Dec 1864 and was buried in Circleville, Piute, Utah. On 5 June 1866 a daughter, Eliza Bridget, was born. When she was three weeks old they were driven out of Circleville by the Indians. They had also been attacked by the Indians the previous Fall of 1865 when they were returning from Salt Lake City where they had been to get winter supplies and to receive their endowments; but both times they escaped unharmed.

After leaving Circleville, they journeyed to Ephraim arriving on July 3rd where they remained for a short time and then moved on to Spring City. During this time the Black Hawk War was being fought and Hames was made a minute-man to stand guard by day. He served in this capacity until the treaty was signed.

In 1870 he was endowed to Andrea Catherine Johanna Anderson who was born in Denmark on November 14, 1851. The family moved to Chester in 1872 where they resided for number. During this time, he was president of the Y.M.M.I.A. and also served as superintendent of the Sunday School and held many other positions.

In 1869 he moved back to Circleville. Over a period of years he acted as superintendent of the Sunday School, Counselor to the Bishop and also presided over the High Priest’s Quorum

Twelve children were born to his first wife, Elisa M. Allred, who lived to be 91. She died on April 12, 1939, in McGill Nevada. These children were:

To his second wife, Andrea C.J. Anderson, there were nine children born. She preceded dim, dying on July 7, 1893, at the age of 42. There children were:

His posterity numbers approximately 300 and of this number only 41 are deceased. The following Indian story is quoted by him: “In 1865 the Indians began to be hostile. I would stand picket guard by day on the highest peaks so if they came to make an attack on the stock or town we would see them first and give the alarm, and then would stand guard at night so they could not creep in and murder and plunder by night. I continued until we wend back north to Salt Lake City on October 24, 1865 to receive our endowments and to obtain our winter supplies. On returning home we got as far as my wife’s uncle, Jackson Allred’s home at Marysvale where we stayed overnight. My brother-in-law, Mads Nielson, and wife Ellen, myself and wife, and my wife, and my wife’s brother, Brigham Young Allred, the next morning (November 24) started homeward. When we git within eight miles of home, my wife saw someone driving a herd of stock away. She drew my attention to it. I said, “That is the Indians driving our stock off.”

I let my oxen drink and asked her if we should hide in the bushes because that would protect us, and I could stand them off as I had two revolvers on me. We decided to move on and had not gone more than two miles when we spied twelve Indians counseling whether to attack us or not. We continued driving when our dog started barking at something in the bushes. To my surprise and horror we discovered the bloody clothes of Mr. Floid who had been driving his team of steers ahead of us. I spied the steers on a hill and told my wife, “They have killed the old man.” We went a few rods further where I saw the wagon of my brother-in-law. The cover was stripped off and the contents of the wagon had been open and scattered. The feather bed had been ripped open and the feathers scattered. Flour sacks had been ripped open and the flour heaped on the ground. One horse was lying dead by the side of the wagon. We made our way across the river. By this time, the men who had been hiding in the bushes below came to us. My wife was crying; sincerely thinking her sister and brother and brother-in-law lay dead under the heaps of flour. At that, my brother-on-law raised up from where he was hiding in some bushes. He told his wife he thought they had captured her sister as there were four instead of two. When he raised up, I got a glimpse of him and said, “Mads is not killed, I just saw his head!” My wife and I left the team and went across to the river, packing her across on my back.

The Indians had just crossed ahead of us. I again told my wife to let us get in the bushes for protection to which she cried, “I would rather die on open ground than in the bushes.” We traveled on and reached home at dusk. My brother-on-law remained in the bushes, his wife in the water to her waist with the little boy on the bank. She said, “If they kill my husband I will drown myself and my brother.” When they thought the Indians had gone, they made their way homeward. Our meeting that night can be better imagined than told. Robbed of everything, bedding, clothes, and provisions, left in the hands of providence to provide for ourselves, never mourning or complaining, but thankful our lives had been spared.

The next day after the raid, November 25, we went and gathered up the dead bodies which were: Mr. Floid, Christian Christensen, two boys, Orson Barney and Neils Neilson. I continued riding expresses, guarding and fighting Indians until the war ended.

We were called to vacate Circleville. We left on the 28th of June moving in Ephraim on the 3rd of July. We remained there a short time when we moved to Spring City. I stood guard by night and was one of the minute men to guard by day. I served for six months. This was in the year of 1867. By this time the treaty was made in 1872 and I moved to Chester. I remained there a few years when I was chosen to preside over the Young Men’s Association, later on, chosen as a Superintendent of the Sunday School. From 1892 I filled many prominent positions some of which were: Counselor to Bishop Jensen, presided over High Priests, Head Teacher. Also I was a strict tithe payer and the Lord blessed me in my labor.

Grandpa Munson was sent to Council Bluffs for immigrants which took several months. The church paid hin $300.00 for his work so he just donated that back to the Church. He hired out to work for the Cherokee Indians and they fed him well and their Sunday meal consisted of skunk meat which at that time was a real treat.