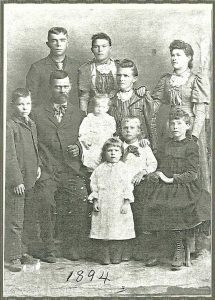 James Tillman Sanford Allred Jr. (Tillman) was the eldest son of James Tillman Sanford Allred and Eliza B. Manwaring. He was born February 25, 1854 in Manti, Sanpete County, Utah.  Tillman was born of good parents. They embraced the Church of Jesus Christ of Latter Day Saints in 1832. Due to the persecution heaped upon the church and it’s members in Nauvoo, Illinois they came west, under the leadership of Brigham Young, to the Salt Lake Valley.

James T.S. and Eliza began breaking ground, cultivating, planting seed and raising crops. Not long after their arrival in Salt Lake a delegate in Indians came to President Young and requested some white men to come and educate the Indians. Teaching them how to farm and raise crops was to be their assignment. After listening to their request, President Young agreed, and stated to the church members frankly that he wanted good men and women to go who were not in the habit of taking the Lord’s name in vain. He advised James Allred (James T.S.’s father) to go down and select a place for a settlement where he could locate his numerous posterity and preside over them. The Allred families left the Salt Lake Valley in early fall and arrived in Manti November 22, 1851. 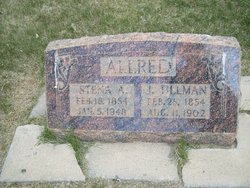 By report of the Indians it was the most severe winter the valley had ever known. In the spring they began to make a settlement, but it was only a short time until their friendship with the Indians was broken and the settlers in Sanpete were in great danger. They were compelled to build forts for protection and be on guard continually.

Tillman was born during those troubled times with the Indians. Form 1851 until 1866, they lived in constant fear of the Indians. The Allred families made a settlement in Spring City in 1852, but they were driven from their homes. To Manti’s fort five times that first year. The settlers in Spring City (or the Allred settlement as it was known then) suffered a great deal due to the scarcity of food, cold winters and the hostilities of the Indians.

When Tillman was only 10 years old his mother, Eliza, died. She left eight children. Tillmen, being the eldest boy, was expected to do a great deal. Even before his mother’s death he was responsible for much of his father’s work while his father was away from home settling Indian affairs. Tillman’s father was loved and respected by the Indians and was an Indian interpreter.

When but a small boy, Tillman saw his companion pierced full of arrows and scalped by the Indians while he hid in the willows near by. The Indians saw him and searched for him in vain, walking over and over past the willows where he quietly lay.

Tillman married Christena B. Anderson when they were both quite young, both were scarcely seventeen years old. They, with two other couples, who were Reuben Warren Allred and Clara Robinson, John Blain and Sorilda Allred; went by team to Salt Lake City so they could be married for all eternity in the Endowment House December 19, 1870. It was a very cold but an enjoyable time for them all.

After they were married, they moved into two room of Tillman’s father’s home, until they built a home of their own. Shortly after, they build a two room home two blocks east of James T.S.’s home in Spring City. Seven of their children were born in this tiny home before they built a large six room home on the same lot. One more child was born into their family after they moved into this home. They lived in the same place seventy-seven years.

Tillman was a very industrious man but he had very little formal education because of his family responsibilities; caring for his younger siblings while his father was away much of the time.

As a young man, he stood guard for Spring City as a watchman against Indian troubles. He spent many hours also in guarding the town’s livestock. Those early years were filled with great danger for the settlers.

Tillman was always busy but never too busy to attend to his church duties. Many times he was called up in the night to administer to the sick. As he grew in years, his faith in the Lord grew and increased. Life had it’s problems for him, it’s days of discouragement, sorrow and disappointments but they were softened by the quality of kindness he possessed and his sincere consideration and respect for others. He cultivated love and kindness in his brother and sister and all his family, friends, and neighbors. He was always ready to assist anyone in need, often at great personal sacrifice for him and his family. Nothing was too hard for him if it gave others pleasure. He was very considerate of all his family when they came to visit and his in-laws expressed that the was their favorite son-in-law.

Each year when the valley emerged form it’s blankets of snow and ice, and at the first signs of spring; Tillman was ready to begin his work on the farm. It was located one and one-half miles east of Spring City, known as the flats. He was always up at the break of day and during irrigation season remained up all night to take care of the water. It was the water master’s duty to operate the water gates with keys; he often trusted Tillman with the keys knowing he would go by the rules. It wasn’t many farmers that could be trusted so completely; many were guilty of using their neighbors water. But Tillman never would consider such an act.

The spirit of man is the power of life. The spirit of an individual had the power to heal and restore the physical body when afflicted with physical ailments or sickness, through the power of the Holy Priesthood. Tillman held that Priesthood power and he healed the sick many times. Through it, he was also healed. He was subject to sever headaches and sever sick spells but never grew discouraged or complained and always remained humble.

Tillman was a faithful tithe payer and always gave the best “tenth part” he had. He was ordained a Seventy in the Priesthood August 1884. He and Christena performed ordinance work in the Manti Temple during the winter months. Their children were raised as “Mormon children” and taught by their parents to be very congenial and considerate of each other. No sacrifice or effort was to great to keep their children on the right path. He was ever ready to give his children praise for any good deed and they also received punishments for their mistakes.

He loved sports, ball playing, hunting, wrestling, horse shoe pitching etc. He was always fair in a game as he was in his dealings.  At one period in his life he worked as water master, town marshal and held the church calling or ward teacher to many families.  In about 1898 Tillman suffered a sunstroke and contracted typhoid fever He was not expected to live and never ate any solid food for over thirty days.

During Tillman’s illness, his son Q moved with his family to Canada to homestead there. When Tillman recovered he worried about his son so far away from home and decided to visit him. He went with another son Oliver. They boarded a train for Canada July 28, 1902. They had traveled for a few days when Tillman took very sick, the train’s conductor advised Oliver to take him off at Lethbridge, Canada and find a doctor. While they were at the hotel there, some young men originally from Spring City who had moved to the Lethbridge area, heard of Tillman’s illness. They immediately got a surrey, made a bed and took them to Q’s home, a distance of seventy miles. Tillman fell into unconsciousness on the trip and remained so until he passed away Monday morning August 11, 1902.

The Relief Society sisters there made his burial clothes and prepared him for burial. He was laid to rest in Mountain View, Canada cemetery because it was the law they no body could be shipped from that country for one year. After that long Christena did not wish that his body be disturbed. A grave marker was placed for him in his home town at Spring City, Utah. Tillman was 48 years 5 months and 16 days old at his death.

“Brother James Tillman, in the name of the Lord Jesus Christ I lay my hands upon thy head and seal upon thee a patriarchal blessing that may be and abide with you. That may follow you through all your life long, and be an abiding witness of the goodness of our Heavenly Father that may prompt you to duty and to exercise the powers of the Priesthood that had been sealed upon thine head for thou art of the promised seed, through the loins of Ephraim that is coming down through the lineage of the fathers that shall be extended to thy children through faithfulness to the laws of the Gospel. Thou art of the promised seed through which all blessings flow.

Thou hast a testimony to bear to the nations of the earth in the carrying of the Gospel to the hearts of the honest. Be therefore faithful, and the God of our fathers will bear thee up and you shall have a testimony of the Gospel burning in your hear, whereby you may be able to preach repentance to the people whether at home or abroad and the hand of our Father shall be over thee, that you may be able to resist the evil power and I bless you for the integrity of your heart, for the love that you bear to the truths of the Gospel.

Your children shall honor you and comfort and bless your heart in your declining years. The Lord knows your heart and will bless you with your desires that shall be realized through all your life long, and when affliction shall seize you, let your faith be made manifest and God will overrule all things for your comfort and that of your family.

I seal upon you all the former blessings that have been sealed upon thy head which shall make you rejoice in the Holy One of Israel for the deliverance that has been wrought, and shall be realized in afterlife. All these blessings I seal upon thy head in the name of Jesus and by virtue of the Priesthood vested in me as a patriarch in Israel, even so. Amen.