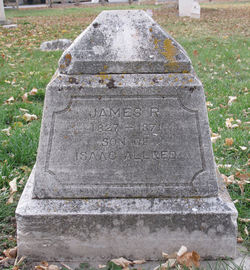 James R. Allred, son of Isaac and Mary Calvert Allred was born 28 Jan. 1827 in Tennessee. This family, with other Allreds, was converted to the restored Gospel, by missionaries of the L.D.S. Church while living in Tenn. Some members of the family were baptized in 1832. After their conversion they went 500 miles into Missouri, to be with other members. Especially they desired to live near by its leaders, mainly the Prophet Joseph Smith. Likely James R. was 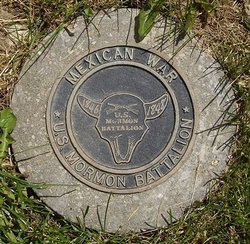 baptized at age 8 as were other children of these families. James endured the hardships of persecution of mobs, being driven from his home in Missouri, and later from Nauvoo, Illinois. In 1846 when other Allred families were forced to flee into Iowa he was among the number. And in that same year the Mormon Battalion was organized and left Ft. Leavenworth for Mexico. James Riley only 19 went along with his older brother, Reddick N. and three Allred cousins, going the entire distance to San Diego. On July 18, 1846 was his enlistment date in Company A. Reddick returned to the Missouri River via Fort Hall, Idaho in 1847. James R. Remained in California likely assisting in the building of places of protection. Following is a quote from “HeartThrobs of the West”, Vol. 9 pp 456-462 concerning this group:

According to previous arrangements a company of 8 persons started on the 1st of May 1848, Sgt. David Browett being elected captain, to pioneer, if possible, a wagon road over the Sierra Nevada mountains, the Truckee route being impracticable at this season of the year. This company consisted of David Browett,

From the same Vol. 9, Church Chronology:

Sat. June 24, 1848, Captain Daniel Browett, Daniel Allen and Henderson Cox, three of the Battalion Boys, left Sutter’s Fort, California, on an exploring trip across the Sierra Nevada mountains. A few days later they were killed, and their bodies terribly mutilated by Indians. The bodies of these 3 were found by the others of the Battalion boys at a place they called “Tragedy Springs” and were properly buried at that place.

The remainder of this group arrived in Salt Lake Valley about the lst of Oct. 1848 feeling happy that they had exchanged the Land of Gold for relatives and friends in the home of the L.D.S. D. Tyler from History of Mormon Battalion.

James R. was discharged in 1847 in California. Upon returning to Utah undoubtedly he joined his brother Harvey in SLC. The following year his father Isaac and mother, with younger brother, Isaac Morley age 14 and Sidney R. age 12 arrived in Utah in Oct. 1849. They lived for a time in Cottonwood, now Holladay, Utah where in 1851-2 the tired little mother, Mary Calvert, passed away. The family moved to Kays Ward later Kaysville. When relatives moved to Sanpete County, James R. was with them.

In Spring City James R. built himself a cellar or dugout where he lived on the lot later owned by Lena Tullgren Bradley, now owned by Joseph Beck. He was a gifted singer, as were his brothers. He cheered his companions with his many songs, filled at various times with merriment as well as pathos. He was, it is said, a kind-hearted man, especially to those in sorrow; and in digging many graves in the old cemetery, mainly during times when epidemics of diphtheria and spotted fever took their toll on the early settlers. My mother, Maria J. Borresen Allred knew him well when she was a child, being his neighbor. She is now in her 90th year and her memory clear and active in 1954. James R. was unmarried; he passed away 14 April 1871 at Spring City. Elder Orson Hyde regarded him as a Saint, worthy of the greatest blessings from Our Heavenly Father.

NOTE: On 1 April, 1866, James R. Allred enlisted in the Utah Territory Militia as a private under command of Isaac Martin Behunnin in the Black Hawk War. Discharged date: 1 Nov. 1867.

By Jennie A. Brothersen, Grandniece