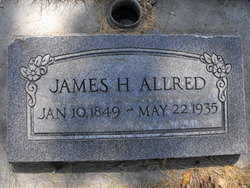 My father, James Allred, given here as James Henry, never used his middle name but was known as James Allred or some times his family called him James H.

James Henry Allred was a pioneer family, inherited pioneer conditions and surroundings. He was among the first children born in Salt Lake City on what now is pioneer park, 2nd West between 3rd and 4th South Street, January 10, 1849, when Salt Lake was less than two years from the arrival of the pioneers, of whom his father, Paulinus Harvey Allred, and his grandfather, Isaac Allred, were in the first company. He saw pioneer life in every phase and could adapt himself to fit conditions as they arose.

He was born possessing a strong vigorous well-proportioned body, six feet high in his stocking feet and weighed from 240 to 260 pounds according to how the law of supply and demand operated. He had a rugged constitution that scarcely knew what a sick moment was until after 85 years. His mind was vigorous and active. He loved the out-of-doors, was not afraid of hard honest work, cheerfully met the rough side of life and never tired in his untiring service to his family and to his church in which he served with unwavering faith and devotion.

James H. Allred was, therefore, by nature and by circumstances a pioneer in doing a good work in redeeming the barren desert at hand and he lived to view with keen satisfaction the rise of an inland empire, the pride of his people and joy of a nation. Eleven years after the coming of the pioneers, when Johnson’s army sent by the President of the United States to subdue or exterminate the Mormon people for their supposed insurrection, Salt Lake City was entirely deserted by every family and the people fled for safety in what was known as the move of 1858. This included Grandfather Paulinus Harvey who married Melissa Norton, an early pioneer from Indiana, and his father, our Great-grandfather, Isaac Allred, who married Mary Calvert. These, with James and William Allred, brothers of Isaac, are the for-fathers of the Allreds of Church membership today.

Disclaimer:  Although some family histories and family trees claim Mary Calvert Allred was a direct descendant of Lord Baltimore, this has been proven wrong by additional research.  For further information on this research and findings, please contact Maryellen West.

The Allreds never returned after the move, but remained in Lehi and the southern part of the State. Today a great and widely scattered family. James Allred continues as a prominent pioneer in helping lay the foundation of the beginning of Lehi and to see it grow into a prosperous city of a happy liberty-loving people.

My father loved the soil and was truly a son of the soil; he never worked for the other fellow; he responded untiringly in his work of redeeming the land, building homes, schools and churches.

Fearless and outspoken he sometimes seamed abrupt; was never outwardly demonstrative yet he possessed a heart of gold and possessed the inward emotion of a child. He was always true blue to his family and his sacred obligations,an honest man--therefore was the “noblest work of God.”

As father of a large family of 10 children - eight boys and two girls - he was ever solicitous and watchful and ready to direct their lives, not only by advice, but by his own potent example which was most effective in his own family and his own community.

He performed a wonderful mission in the State of Virginia during the years of 1894 - 96.

His life’s work was not, nor could be of man alone for he needed and was nobly sustained by a noble companion and helpmate. Our father was most fortunate when he met Kate Jones in S. R. Thurman’s school in Lehi, whom he married June 16, 1873 in the old Endowment House on the northwest corner of the temple block, by Daniel H. Wells. James Allred was most happily married, and therein lies the story of his success. He married my mother - a slender, small woman - when she was 19 and weighed less than 100 pounds. This was a most important occasion, the beginning of a new life, the bounds of which are beyond time and even now cannot be fully comprehended.

Our Father was a public spirited man who never sought public office. He did serve one term as a City Councilman of Lehi. He was fearless in the discharge of his duty and would fight quickly, if necessary, to defend the truth. I know that the Lord loved and sustained him. But two brief instances:

John Cardon, a missionary companion of father’s in the state of Virginia in 1894-95, and who at present is a co-officiator of mine in the Logan Temple, says: “Your father was a wonderful missionary and was faithful in all things. He could bathe without a flinch in the coldest water of any man I ever saw. On one occasion we were without a place to sleep, having been refused by many. We asked at the last house before we were to go over a rugged mountain and it was dark. The man who refused to give us entertainment, showed the path and told us to take it. We felt our way along the path and the path became worse. Finally your father said, “stop! We are in danger; we must have a light,” when suddenly a bright light came from heaven, and we discovered we were on the edge of a great precipice and another step forward would have cost us our lives. We cautiously retraced our steps back to the home that had directed us and slept in his straw pile the first and only night we slept out.”

I recently talked with President Goates of the Lehi Stake who told me that when he was 5 years old his fathers family was stricken with scarlet fever. His only sister, age 7 years, had died and the doctor had given up all hopes on his recovery. Our father, who was a close friend to his father, came down and boldly broke the quarantine, walked into his bedside, then administered to him and promised him he would get better and live. Pres. Goates said, “I am here today because of that blessing.”

James H. Allred was a man that everybody knew because of his short visits to the homes of his neighbors. He had a broad understanding of the gospel and liked to talk of the same. He was full of charity and many a widow and needy home has found a sack of flour at their back door step when no one knew from whence it came except one man. He remained close to the soil which he loved and of which he owned a considerable. He also owned three homes in Lehi and one in Salt Lake where he moved in the closing years of his life to do, with mother, temple work for his kindred dead; a beautiful climax to a beautiful life.

An important part of his life must not be overlooked. He did valuable service as a guardian of the safety of the community against the Indians of early days. He was a member of the w. H. Winns Co., and as such gave valuable service on many occasions in using armed forces to quail the Indians. His father, Paulinus Harvey, known as Colonel Harvey, and who could talk the Indian language at one time, with father met the Indians in the West Mountains and they together persuaded them to disperse and go back in peace.

An important and far reaching phase of father’s life was his move into Alberta, Canada. Having lost all his irrigation water (tapped by artesian wells driven by Salt Lake City on the opposite side of the river) on his big ranch on the west bank of Jordan River, three miles west of Lehi, which had been our home for many years, he looked for new opportunities such as were offered in the new comm\unity of Raymond, Alberta, Canada, where father went in 1902 and bought 2 ½ sections of land , 960 acres of the Knight Sugar Co. He located most of his boys here, part of which members of the family still own. Having accomplished this, father came back to his home in Salt Lake having raised two large crops of wheat in Alberta.

As we pause tonight and scan over the road which we have trod and the pit from which we have emerged, we can but exclaim, “Surely a Devine hand has been over us and shaped our destiny and preserved our lives.”

Taken from the diaries of J. Urban Allred