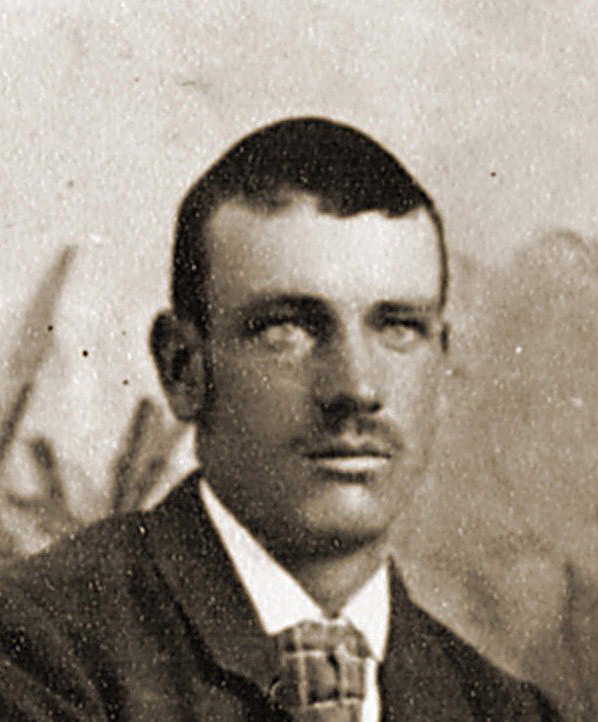 James Martin Allred born 14 February 1838 at Far West, Caldwell County, Missouri. In the year of 1862 he moved to Fairview, Utah with his wife Mary Francis Vance whom he married on the 27 of March 1860. Daughter Martha Ellen was born 23 April 1861.

He purchased a 15 acre farm and built a house, he also had a brick house in town. On October 9, 1866 he married his second wife Christiana Gustave Anderson. Both marriages were performed in the endowment house in Salt Lake City, Utah. 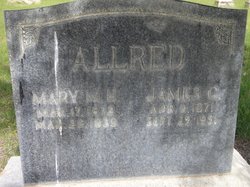 On the 9 of April James Christopher Allred was born to James Martin and Christiana Gustave Anderson. Name of James came from his Great Grand Father James Allred and Christopher from his Grandfather Andrea Christopher Anderson from the maternal side. James was the second child, the first boy of a family of 11 children, seven boys and four girls. James grew up with the children of the community attended school and church where he obtained four years of formal education.

As it seems, work to obtain a living was more important than an education so James helped on the farm. An additional sixty acres was purchased much of it had to be cleared of rock and brush.

It was not all work and no play for James or Jim as he was called. He was quite athletic and entered in most all sports of his day, being very good at the broad jump using weights which were rocks or bricks whichever was the handiest to obtain.

He also worked away from home to obtain money to help support the growing family. The country was developing and especially the town. A railroad came through the town and Jim worked in the mountains cutting ties, mining also was developing and needed props to shore up the loose rocks in the roof. A flour mill, a creamery and a saw mill was established. These all helped to bring in money for the needs of the community.

Jim’s early years at this writing is very vague as he never confided with his family of his younger years.

There lived a family not far from the Allred home who had a daughter about Jim’s age, he fell in love with her and at the age of twenty years married the lovely daughter of Elias Willis Howell and Mary Jane Sanderson. Her name was Mary Marzetta, they were married in the Manti Temple on the 28 day of October 1891.

Jim was a hard working young man. He had a brick house built on a corner lot just one block from his father’s home and a block from Marzetta’s father’s home. In this house all but one of his children were born. Child number 7, Willis was born at Winter Quarters, Carbon County, Utah.

What Jim did in his early years of marriage is not known until about 1903. A section of land north of Fairview known as Indianola was homesteaded by several families of Fairview. At this time reservations were being established and the Indians were being moved onto them. There were a few that refused to be moved but they were friendly and caused no trouble only to beg for food. But they sure scared the tar out of the young ones.

While there we lived in a tent, occasionally an Indian would show up from somewhere and ask for food then disappear. As there was no water for irrigation the homestead was given up and the family moved back to Fairview.

The 24 day of April 1901 brought the first great sorrow to Jim and Marzetta as their 5th child lived just a few hours. Then in the Spring of 1903 an epidemic of Diphtheria hit the Valley and again death took another daughter, their 3rd Lavella Elizabeth. This was a sorrowful time as no one could go to a gathering so a box was made for the child and taken to the cemetery in a wagon. Again death hit the family on the 7th of August 1913, at the age of 20 years James Loren their 1st child was taken, caused by a broken appendix.

In 1904 Jim moved his family to a town called Winter Quarters. This town was a coal mining town where he had employment operating the power plant for the United States coal mine. On March 11 1905 child number 7 Willis Emanuel was born. In the summer of 1905 Jim moved his family back to Fairview taking the new baby boy with them that was adopted by Marzetta’s half sister Zabe Hansen.

Around this time Jim borrowed money to buy 40 acres to farm land in the Birch Creek area, upon this land he built a farm house of sawed logs which was the family summer home, here the work was carried on instead of from town, which was one mile away. In town he had a large barn where the cows were milked. The milk was sold at the creamery for the butterfat, the skim milk was returned and mixed with bran and other parts of wheat (after the flour was taken out) and fed to the pigs.

In the fall of 1905 Jim having his family back at the family home in Fairview went into the meat business.

He constructed a slaughter house in the barn then he bought and raised animals and butchered them himself. Then early the next morning he would pack it in the wagon and would head out for Winter Quarters and Schofield arriving there before night fall. There he would sell the meat to the miners and butcher shops. This was done in connection to operating the farm with help from the family. In the winter the meat was shipped by train which took two days. Jim would ship his meat one day and early the next morning he would have one of the boys take his horse back up the mountain road as far as the horse could go in the deep snow. Then he would start over the mountain using barrel staves as snow shoes and ski to receive the meat the next day.

Seems like Jim liked pigs as he always had a bunch of them around. Sometime around 1910 he quit the meat business and tried other things. He purchased a herd of sheep and after about a year this failed as he couldn’t get range for them. Jim always worked hard. His father was growing old and retired from farming as his family was all grown, they had moved away or had families of their own. So Jim purchased his land East but close to the summer home. This gave Jim 120 acres. 80 acres farming land the rest was pasture.

In the year 1915 Jim heard of a place in the eastern part of the state called the reservation where people were moving. Spring of 1916 he decided to sell his holdings and move his family there. His oldest daughter was now a young woman, she married Lawrence Henry Larsen on the 2nd of June 1915. Jim had arranged for land in the Tridell area, so the mules and cows were herded across the mountains by the two older boys. The teams were used to haul furniture, family and machinery. They arrived in the summer to a two room log cabin with a dirt roof. The ground was good for gardens. Jim had rented 40 acres and had planted it to wheat before going after the family leaving the 40 acres for the two boys to irrigate the wheat. Not being used to that kind of soil the crop was a near failure. What the family lived on for the next year is a mystery, but they never went hungry.

Time went on and Jim borrowed money to purchase more acreage. His family was growing up. They lived about 4 miles from school, they had to ride horseback to obtain their education or live in another town to go to High School.

This is just a small story in Jim’s life when he was really frightened and worried. In one of his 40 acres a deep wash ran through it and most always had a small stream of water in it. He had a scraper or slip as we called it, and was filling or damming it up to use the water, with one of the boys riding the horse to pull the scraper. The water was coming in a littler faster than the dam was raising, he just about had the water going in the ditch when the grey mare fell with her back in the water (which was about 10 feet deep.) The rider was in the water tangled up in the harness and the horse laying on his leg so he couldn’t get out. I was so scared I never thought of anything only the condition of things. (Jim couldn’t do anything) I comforted the horse so she wouldn’t struggle, unbuckled the harness so the rider could get out and the horse was free. Then a few words of comfort and she struggled out, everything was fine except some scared people and a broken dam.

A few years after the arrival to the reservation Jim purchased a plot of ground in LaPoint he said some day he would build a home there. Things went on in the normal way of farm life in a new country. Some lean years and others of plenty. Jim’s family was growing up.

Somewhere in between these marriages Jim constructed a home on the lot in LaPoint and moved in it.  The boys had now grown up and Jim couldn’t handle the farm alone so he retired.

On the 29 of March 1939 a great sorrow came to Jim. His beloved wife and helpmate passed away and on the 3rd day of April 1939 she was buried in Fairview in the family plot. Services were held in LaPoint and Fairview. Now Jim was alone. Later on he sold the home and moved to Salt Lake City and worked in the Temple. In Salt Lake City he met and married Annie Matilda Gerber on the 10 April 1940 for time only. Some time later he developed a cancer which took his life on the 25 September 1951 at a hospital in Salt Lake City. On the 29 of September 1951 he was buried beside his wife and his family that had passed on before him.

I have tried to write this as I have seen his life, and from records I’ve obtained. Not as I the writer but just telling his life story as I have known it. Number 4 in the family.