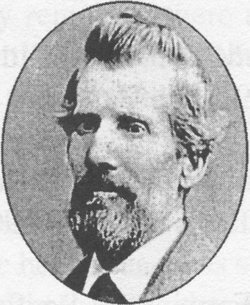 A BRIEF HISTORY AND BIOGRAPHY OF JAMES ANDERSON ALLRED
Contributed by John Arthur Allred, his son

Due to travels in the important localities pertaining to this history and to continuous research, the information herein has been verified by the writer.  James Anderson Allred, son of William Allred and Sarah Warren Allred, was born on November 22, 1819, in Bedford County, Tennessee. 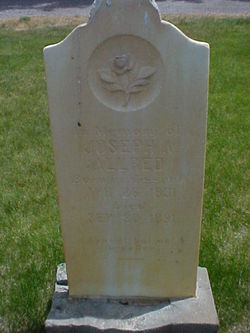 William Allred I and family moved from Georgia to central Tennessee where he died at about the age of 74 in Bedford County. Records show that William Allred was a school teacher. He was in the American Revolutionary War. His wife, Elizabeth Thrasher Allred, died at about the age of 87 years in Monroe County, Missouri. Upon the death of William Allred I all of his children were living in Bedford County, Tennessee. Their names were: Mary, Sally, James, Isaac, William, John, and Elizabeth.

The above William Allred II is the father of our subject, my father, James Anderson Allred.

In the fall of 1828 and 1829 the Allred connections all left Tennessee and settled in Monroe County, Missouri, on the Salt River, later known as the “Allred Settlement”, leaving William II and family in Bedford County, Tennessee. William II was in the War of 1812. March 10, 1813, William Allred II married Sarah Warren, daughter of John Warren and Martha Herrington Warren, who then lived in Maury County, Tennessee. In 1820 John Warren and family moved to the western part of Tennessee and settled in Dyer County. The first circuit court held in Dyer County was held in the home of John Warren. Warren is a prominent name in the early history of our country. Martha Herrington Warren was of French descent on one side and one of her parents was Dutch.

Sarah, the oldest child of John Warren and Martha Herrington was the wife of William Allred II and the mother of James Anderson Allred. Sarah Warren’s brothers and sisters were: Elizabeth, Greene and Henry (twins), Eli, Andrew, Edmond, Louis and Martha Ann.

William Allred II and brothers owned extensive property in Tennessee consisting of several hundred acres of land in Bedford and Maury Counties. The records of said property are still retained in above named court houses.