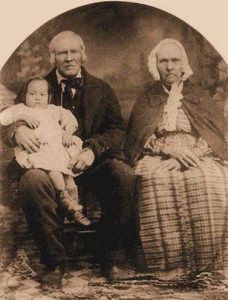 James Allred, son of William and Elizabeth Thrasher Allred, was born in North Carolina, Randolph County, January 22, 1784. His wife Elizabeth Warren was born in South Carolina on May 6, 1787. They were married November 14, 1803, and moved to the Ohio River near Yellow Banks. In 1811, they moved to Missouri, Monroe County, a distance of 500 miles. Here they settled down on the 10th of September, 1832.

They were baptized into the Church of Jesus Christ of Latter-day Saints by Elder George M. Hinlsle at which place a large branch of the Church was built up and called “Salt River Branch.” 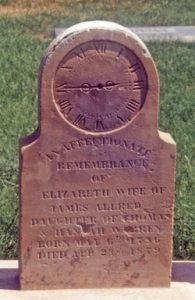 In the fall of 1833, James Allred, two sons, and two sons-in-law joined the company of the Prophet Joseph. In June 1834, they with the Prophet’s company of 200 brethren journeyed to the upper part of Missouri in order to redeem “Zion”, as they thought, and to reinstate a portion of the Saints who had been driven from their homes in Jackson County, Missouri.

In the year 1835, they moved to Clay County, Missouri, and in the spring of 1837, to Caldwell County where the Saints commenced to gather to build up a Stake of Zion. James Allred was elected Judge and also President of the Southern Firm. When the Church left Missouri in the spring of 1839, he moved to Pittsfield, Pike County, Illinois. In 1839, the same year, he moved to Commerce (afterwards called Nauvoo). Where he was ordained a High Priest and a member of the High Council. He was one of the Prophets body guards in the Nauvoo Legion and held several other responsible positions. He helped to build the Nauvoo Temple and assisted in giving endowments therein.

It was while they were living in Nauvoo that the Prophet came to Grandmother Elizabeth Warren, who was a seamstress by trade, and told her he had seen the Angel Moroni with the garments on, and asked her to assist him in cutting out the garments. They spread unbleached muslin out on the table and he told her how to cut it out. She told the Prophet that there would be sufficient cloth from the knee to the ankle to make a pair of sleeves, but he told her he wanted as few seams as possible and that there would be sufficient whole cloth to cut the sleeve without piecing. The first garments were made of unbleached muslin and bound with turkey red and were without collars. Later on the Prophet decided he would rather have them bound with white. Sister Emma Smith, the Prophet’s wife, proposed that they have a collar on as she thought they would look more finished, but at first the Prophet did not have the collars on them. After Emma Smith made the little collars which were not visible from the outside, then Eliza R. Snow introduced a wider collar of finer material to be worn on the outside of the dress. The garment was to reach the ankle and the sleeves to the wrist. The marks were always the same.

In the year 1842, James Allred was ordained a Seventy and a member of the 4th Quorum of Seventies.

About this time the Saints began to be persecuted very hard and more especially heads of the Church. The Prophet and his brother Hyrum were continually being hunted and persecuted by the mobs.

Elizabeth Warren often used to put potatoes in the coals in the fireplace at night and leave bread and butter and fresh buttermilk (of which the Prophet was very fond) out on the table so that they could come in during the night and eat.

In the year 1844, in June, the Prophet, John Taylor, and Willard Richards were taken to the Carthage Jail, Hancock County, Illinois. At the jail the Prophet handed his sword to James and said, “Take this---you may need it to defend yourself.” James carried this sword with him to Utah and it is now on display at the Utah State Capitol.

On the 27th of June, the Prophet and Hyrum were murdered in the Carthage Jail. The Prophet previously prophesied that Willard Richards would not be harmed and true to the prophecy he escaped without a scratch, but President Taylor was badly wounded by four bullets.

James took President Taylor from the prison to take him to his home. He only had his wagon to carry him and the trip was long by road, so they decided that a sleigh could be pulled behind the wagon by going through the fields which were mostly swamps, and this would be only 18 miles distance from Nauvoo. Accordingly, they secured a sleigh, fastened it behind the wagon and placed President Taylor in it. He was bleeding badly and so weak from the loss of blood that he could scarcely speak. His wife sat beside him bathing the blood from his wounds and trying to make the journey as easy as possible. The sleigh was much easier riding than the wagon and by the time they reached home President Taylor was able to talk loud enough that James could hear him from where he sat in the wagon.

After the murder of the Prophet, President Brigham Young with the help of the Apostles then took up the work for which the Prophet had laid the foundation. Persecutions began to rage again with awful fury and in the fall of 1845, the mob commenced burning houses.

On the 29th of February 1846, James crossed the Mississippi River to go west with the heads of the Church. He arrived at the Missouri River July 15, of the same year. Here he was made President of the High Council and acting Bishop at Council Point.

In the spring of 1851, he started west to the Rocky Mountains. He arrived at Salt Lake in October of the same year. He went to Manti, Sanpete County, in March 1852, and April 14, 1852, moved to Canal, now known as Spring City. He was called to preside over this branch of the Church.

At the spring conference in 1853, he was ordained a Patriarch in the Church of Jesus Christ of Latter-day Saints. In July of the same year, the Indians drove most of the cattle and horses of the settlement off, and on the last day of the month, they moved back to Manti.

In October, he moved back to Canal again with a company of 40 Danish families and 10 families of his own relatives. On the 17th of December of the same year, he was called to vacate and again moved back to Manti. In February 1854, in company with 50 families he commenced to build a fort at Cottonwood (now called Ephraim). It was built of stone, the walls being 10 feet high. This was finished and James presided over it until 1860, then he moved back to Canal where he resided until his death.

He was a faithful member of the Church and strict in relations with the Word of Wisdom. He fully endorsed all the principles of the Gospel as far as he knew them. For many years he was a regular attendant of Quorum and public meetings and always ready to devote to the poor.

A friend of the widows and orphans, exemplary to his family. He taught them to be honest and industrious, trustworthy and confidential. He told the Bishop he was ready to join the United Order and all that he had was for the building up of the Kingdom of God.

He raised 12 children of his own and 8 orphan grandchildren (all lived to have children of their own).

He left the wife of his youth after living together for nearly 73 years, and posterity of 447 souls. He had 12 children, 104 grandchildren, 302 great grandchildren, 29 great great grandchildren. Five of his sons were present at his funeral. He laid his hands on his oldest son William Hackley’s head the day before he died and blessed him. All of his children lived to embrace the new and everlasting covenant, and those that are dead died strong in the faith. The most of his posterity lived in Utah and are members of the Church.

He lacked 12 days of being 92 years old when he died. His wife was 90 years old but had been blind for 6 years. His funeral took place on the 11th, and was the largest that had ever been held in this place. Thirty-nine wagons and sleighs loaded with people followed him to his last resting place.

Apostle Orson Hyde preached his funeral sermon and made some sincere remarks concerning his life, labors, and faithfulness as a Patriarch, which was satisfactory to the family and friends. He died at Spring City, Utah, January 10, 1876, at 92 years of age.

Elizabeth Warren died April 23, 1879, at Rabbit Valley, Utah. Her body was later brought to Spring City and she was placed by her husband by Samuel Allred and Reuben Warren Allred, Jr.