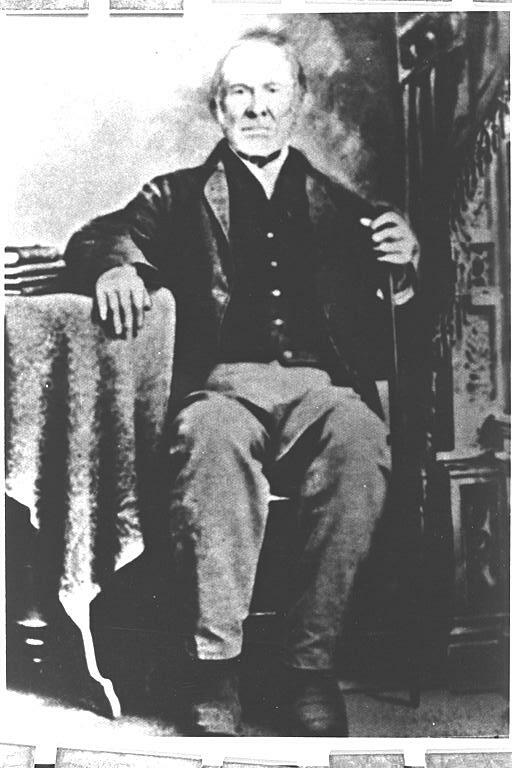 THE EARLY PIONEER HISTORY OF JAMES ALLRED
Related by Eliza M. A. Munson

“My grandfather, James Allred, son of William and Elizabeth Thrasher Allred, was born in North Carolina, Randolph county, January 22, 1784. My Grandmother, Elizabeth Warren was born in South Carolina on May 6, in the year 1787.

They (James and Elizabeth) were married November 14, 1803, and moved to the Ohio River near Yellow Banks. In 1811 they moved to Bedford County, Tennessee. In the year 1825, on March 28, while they were still in Bedford county, my father, James Tillman Sanford Allred, was born. 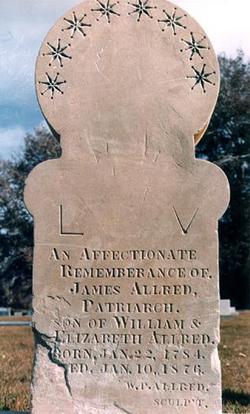 In 1830 they moved to Missouri, Monroe county, which was a distance of five hundred miles. Here they settled down and on the 10th day of September, 1832, they were baptized into the Church of Jesus Christ of Latter-day Saints by Elder George M. Hinkle, at which place a large branch of the Church was built up and called “Salt River Branch.”

In the fall of 1833 Grandfather, two sons and two sons-in-laws joined the company of the Prophet Joseph Smith. In June, 1834, they with the Prophet’s company of two hundred brethren journeyed to the upper part of Missouri in order to redeem “Zion” as they thought, and to reinstate a portion of the saints who had been driven from their homes in Jackson county, Missouri.

In the year 1835 they moved to Clay County, Missouri and in the spring of 1837 to Caldwell County where the saints commenced to gather to build a stake of Zion. My Grandfather was elected county judge and also President of the southern Firm. In the autumn of 1838 times began to be very troublesome and the citizens of the adjoining county raised all manner of false accusations against the Latter-day Saints and more especially the leaders of the Church, so that the Governor of the state ordered out several thousand men to either exterminate or expel them from the state of Missouri and it was only as a result of laying down their arms and giving up the Prophet Joseph and his brother Hyrum and several other heads of the church, together with their agreement to leave the State the following spring, that their lives were spared. Accordingly in the spring of 1839, the church in mass left the state of Missouri and moved to Illinois where they settled in different parts of the state.

My Grandfather settled in Pittsfield, Pike County, Illinois, and in the fall of the same year they moved to Commerce, which was later called Nauvoo, where he was ordained a High Priest and a member of the High Council and was chosen as one of the Prophet’s body guards in the Nauvoo Legion. He also held several other responsible positions, and helped to build the Nauvoo Temple and assisted in giving endowments.

It was while they were living in Nauvoo that the Prophet came to my grandmother, who was a seamstress by trade, and told her that he had seen the Angel Moroni with the garments on, and asked her to assist him in cutting out the garments. They spread unbleached muslin out on the table and he told her how to cut it out. She had to cut the third pair, however, before he said it was satisfactory. She told the prophet that there would be sufficient cloth from the knee to the ankle to make a pair of sleeves, but he told her he wanted as few seams as possible and there would be sufficient whole cloth to cut the sleeve without piecing. The first garments were made of unbleached muslin and bound with turkey red and were without collars. Later on the Prophet decided he would rather have them bound with white. Sister Emma Smith, the Prophet’s wife, proposed that they have a collar on as she thought they would look more finished, but at first the Prophet did not have the collars on them.

After Emma Smith had made the little collars, which were not visible from the outside, then Eliza R. Snow introduced a wider collar on the finer material to be worn on the outside of the dress. The garment was to reach to the ankle and the sleeves to the wrist. The marks were always the same.

In the year 1842 my father was ordained a Seventy and a member of the 4th Quorum of Seventies.  About this time the saints began to be persecuted very hard and more especially the heads of the Church. The Prophet and his brother Hyrum were continuously being hunted and persecuted by the mobs. Grandmother often used to put potatoes in the coals in the fireplace at night and leave bread and butter and fresh buttermilk (of which the Prophet was very fond) out on the table so that they could come in during the night and eat.

In the year 1844 in June the Prophet Joseph Smith, his brother Hyrum, President John Taylor and Willard Richards were taken to the Carthange jail, Hancock County, Illinois. At the jail the Prophet Joseph handed his sword to my grandfather and said, “Take this -- you may need it to defend yourself.” (Grandfather carried this sword with him to Utah, and it is now on display at the Utah State Capitol.)

On the 27th of June the Prophet and Hyrum were murdered in the Carthage jail. The prophet had previously prophesied that Willard Richards would not be harmed, and true to the prophecy he escaped without a scratch, but President Taylor was badly wounded by four bullets.

Grandfather took President Taylor from the prison to take him to his home. He only had his wagon to carry him and the trip was long by road, so they decided that sleigh could be pulled behind the wagon by going through the fields which were mostly swamps, and this would be only eighteen miles distance from Nauvoo by cutting through the fields. Accordingly, they secured a sleigh, fastened it behind the wagon and place President Taylor in. He was bleeding badly, and so weak from the loss of blood that he could scarcely speak. His wife sat beside him bathing the blood from his wounds and trying to make the journey as easy as possible. The sleigh was much easier riding than the wagon, and by the time they reached home, President Taylor was able to talk loud enough that my grandfather could hear him from where he sat in the wagon.

After the murder of the Prophet, President Brigham Young with the help of the apostles then took up the work for which the Prophet had laid the foundation. Persecution began to rage again with awful fury and in the fall of 1845 the mob commenced burning houses.

In November 23, 1845, my father was married to my mother, Eliza B. Manwaring. She was an English girl and was born in Hersfordshire, England on November 23, 1823, and crossed the ocean in the first Mormon vessel that ever sailed the ocean. She joined the church in the year 1835, and for some time lived with my grandfather and grandmother Allred for three years prior to the Prophet’s death, she was employed as cook in the Nauvoo Mansion.

In the spring of 1846, my grandparents, my father and mother, and two brothers and families started westward into the wilderness with the heads of the church and others. On the 20th day of May they started west through the Iowa territory and on to Council Bluffs. On July 16th, my father enlisted in the Mormon Battalion and he and mother started to Mexico by the way of Fort Leavenworth and from there to Santa Fe and then to Pueblo on the head of the Arkansas River where they wintered. In the spring they resumed their journey and suffered many hardships. While they were traveling across the plains the men were grouped into groups of ten each and there was one woman allotted to each group to wash and cook for them. My father was head of ten men and my mother washed and cooked for them.

My mother was ill a good deal of the time and inasmuch as they did not have a wagon, another old couple shared their wagon with my mother. She gave birth to a baby boy which died, but the company could not wait while it was buried, so my father stayed behind to bury the baby. He was so weak and tired from exposure and exhaustion that he could scarcely catch up with the rest of the company after this delay.

On the 24th day of July, 1847, Orson Pratt and George Q. Cannon who were pilots for the company, (Brigham Young company) came down Parley’s canyon but there was so much underbrush that it was very difficult to get through so they had to go back and came Emigration. A few of the saints entered the valley on that date. On the 27th another portion of them entered the valley, but on account of my mother’s poor health, they were obliged to stay behind until four days later, and they entered Salt Lake valley on the 29th day of July, after much suffering and many hardships.

On February 29, the following spring the second baby girl was born in Salt Lake City and that was me.  In the spring of 1849 father went back to the Platt River to establish a ferry and help the saints to Salt Lake City. Later in the same year Brigham Young called he and some other men to move their families south to Sanpete County. They started a settlement which was called Manti. That winter and the following one, so much snow fell that many of their cattle were killed.

In the spring of 1852, Brigham Young and the Council of Twelve called my Grandfather and Father to move sixteen miles north and commence a new settlement. They remained there until 1853, when the Indians drove off all their cattle and horses. They vacated the settlement and moved back to Manti.

Brigham Young and the Council of Twelve then called father and fifty other men to go seven miles north and commence a settlement which was called Ephraim.

At the spring conference in 1856 father was called to go on a mission to Las Vegas to preach to the Piute Indians, as Brigham Young knew he was a good Indian interpreter. He was also a peacemaker among the Indians and always had many Indian friends.

On the Twentieth of April, 1866, my mother died. Grandfather died in 1876, at the age of 92. Grandmother was blind the last six years she lived but enjoyed good health up until her death. She lived to be within a few hours of the age of Grandfather when she died, which was in the year 1879.

My father always said that he would live to be eighty years old and this privilege was granted him. He was eighty years old on the twenty-eighth of March, 1905, and he died early the following morning.”

Note: Practically all of this information was taken from a diary which was kept by James T.S. Allred, father of Mrs. Munson.  First typed by Donald M. Tate, June 17, 1959