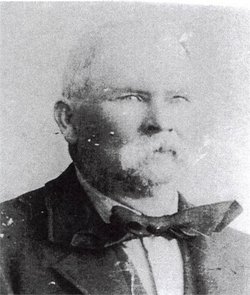 James Alexander Ivie was born in Paris, Monroe County, Missouri on the 17th of March 1830. He was the fourth child of James Russell Ivie and Elizabeth McKee Fausett, James Russel was the son of David Anderson Ivie who was the son of Jessie Ivie who lived in Bedford County. Tennessee and later in North Carolina. 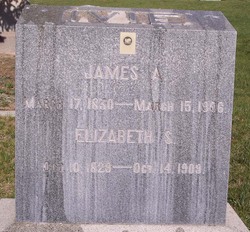 The first of the family in America was Thomas Ivey who is known to have been living in Virginia in 1625. Upon the family crest is the motto: “To be rather than to seem.” Many branches of the family still use the original spelling of the name - - Ivey. Tradition states that a school teacher in Tennessee, suggested the change to “Ivie.”

After their conversion, the family of James Russell Ivie subsequently moved to Nauvoo, Illinois, and went through the persecutions incidental to that period, the father, James Russell having been one of the body guards to the Prophet Joseph Smith.

The family arrived in Utah in 1848 in the second company of Mormon pioneers. In the early 50's, 149 people were called by President Young to make the first settlement south of Salt Lake Valley. Fourteen persons by the name of Ivie answered the call and moved on to the present site of Provo. Quotation from Peter Cottfredsen’s, Indian Depredations in Utah: “The Indians at first so friendly with the Utah Valley Colonists began their depredations in that vicinity in the spring of 1849. Grain was stolen from the fields, cattle and horses from the hers and now and then an Indian bow would fall uncomfortably near some settler as he was out gathering fuel in the river bottoms.”

James Alexander Ivie was eighteen when he arrived in Utah with his family and they moved to Utah Valley. He married Elizabeth Sophia Porter on the 14th of November, 1849. The children of the marriage were Lydia Ann, James William, John Alvin, Joseph Alma, Mary Elizabeth, Glostia Jane, Eliza, Charles Albert, Lilly, Isadore, Frank, Willis and Alice.

“Our pioneers were courageous people. They possessed the best qualities of serious minded pioneers - - friendliness, optimism, faith, courage, initiative, and endurance.” Four members of the Ivie family by birth or marriage took part in the memorable Mormon Battalion 2,000 mile trek across the continent. Nor was grand father lacking in any of the good qualities that made the Utah Pioneers noteworthy. It was four years after his marriage that the following unfortunate event took place and I quote from Milton R. Hunter’s Utah in Her Western Settling.

The main trouble was the white man settling on the Indian Hunting ground. Resentment grew in the Red Man’s breast. Then too, Chief Walker and others were engaged in the business of Indian slavery - buying and selling Indian women and children to the Mexicans. Brigham Young forbade this practice. Seeking revenge on the Utah settlers, the Mexicans supplied arms and ammunition to the red man. The ground was prepared for a conflict between the settlers and the Indians which needed only some indiscreet person to commit an act which would give the natives and immediate excuse for war. This act took place July 17, 1853. Three Indian men and a squaw came to the cabin of James Ivie, about a mile and a half North of Springville. The men stayed outside and sent the squaw into the house with three large trout. She offered to trade them to Mrs. Ivie for some flour. The white woman called to her husband to get his views on the trade. “Give her three pints of flour for the fish.” Ivie suggested. Then resumed his work at digging a well. Two of the Indians came into the cabin, one being the husband of the squaw. When he saw the amount of flour she had received from the exchange for the trout, he began kicking and beating her. Mrs. Ivie immediately called to her husband, who tried to stop the buck from beating the squaw and a fight resulted. As Ivie pushed him outside, the Indian grabbed his gun which he had left standing by the door. He tried to get it into position to shoot Ivie, but the white man seized the muzzle of the gun. In the struggle the weapon was broken, the Indian retaining the sock and Ivie the barrel. As the fight proceeded, Ivie struck the Indian with the barrel so violently that the red man fell dead. Thereupon another Indian attack Ivie. As result of a similar blow with the barrel of the gun, he fell to the ground in a condition of unconsciousness.

The Indian woman, whom Ivie had tried to protect, came running out of the cabin door with a stick of wood in her hand. With it, she hit Ivie several blows cutting a gash so deep in his face that a scar remained there the rest of his life. Endeavoring to protect himself, Ivie struck the Indian women and she too was killed.

At this junction in the fight, Joseph Kelley from Springfield came upon the scene. He tried to revive the Indians by pouring water on them, but to no avail. He sent the third Indian who had not participated in the fight after another bucket of water. Instead he hurried off to Chief Walker’s camp to inform his people of what had occurred at Ivie’s cabin. Thereupon Ivie, his wife and child and Kelley hurried to Springville for protection,” end of quote...

The Walker War was on in its fury and lasted nearly a year, until President Young made a Treaty of Peace with Walker and the other Ute chiefs. Many white people and scored of Indians were killed, and there had been a woeful destruction of herds and property.

When a family reunion years later, James Ivie was spoken of disparagingly as “Jimmy Ivie the renegade,” my mother stoutly defended him as a man of sterling qualities, honest, hard working, fun-loving, stately in his carriage, proud of his own and his family’s achievements as colonizers of the West. The story has often been related in our family circle of his being absolutely fearless and resourceful. He and his younger brother Col. John L. Ivie supplied fish and meat to the settlement of Provo and often mingled with the Indian boys along the shores of Utah Lake in the early fifties. In those days when flour was at a premium three pints of flour was a high price to pay for fish he could easily have caught himself. His southern chivalry and his respect for womanhood prompted his attempting to protect the Indian woman from the cruel beating she was receiving at the hands of an irate husband. It must be borne in mind that the seething resentment of the Red man has been growing for many years. The instances are almost too numerous to mention that brought to a climax the open hostilities of the Walker War of 1853. The Indian had steadily been pushed back, his favorite haunts and hunting grounds poached upon by the white ma. Smallpox, the white man’s disease, had virtually wiped out whole tribes of his people, and President Young had tried to put a stop to the lucrative practice of selling captives to the Mexicans for liquor and ammunition. To bad the ultimate event that climaxed with the war was laid at the feet of any one man because it put the feeling of constraint upon James Alexander Ivie and his entire family causing many of them to leave the church. Grandfather, however, always obeyed authority and in 1855. James Ivie with 41 men were called to go to Moab on the Grand River to colonize. After losing their herds and equipment, the settlement was abandoned in the fall and they returned to answer the call to Millard county.

The Children by a second marriage to Sarah West, a young English convert, are: Sarah Frances (1859), George Henry (1861, my father), Jared Alexander, Mina Ora, Laura, Amy Louise, Russell, Belle, Samuel and Lafelt. These children were born in Scipio, Millard County where James A. Ivie operated a ranch near Maple Grove.

It was between the years of 1865-68, while the Ivie family lived in Scipio, that the Black Hawk War took place. This was by far the worst outbreak of Indian trouble the settlers ever experienced. Sanpete and Sevier Counties stood the brunt of these depredations. Naturally Millard County was affected too. Grandfather took part in these trying years and was given a pension along with 3,000 Utah men who were called into service during the course of this conflict.

As I have read the personal accounts of the sufferings of the settlers, I can see the enmity Grandfather incurred by some who thought he was responsible for the outrages of the Indians. The Indians demanded his life. Naturally the sense of remorse, resentment and revenge surged through him also when his own father was killed on June 10, 1866 at the hands of Indians who thought they had the “Jim Ivie” they sought. Quote , “On the morning of June 10, 1866 a large band of Indians under Chief Black Hawk made a raid on the stocks in Round Valley, Millard County. They killed old father James Russell Ivie, father of Colonel J.L. Ivie, James Alexander Ivie and others and mortally wounded Henry Wright, who was out looking for stock, and drove off about 500 head of cattle and horses.” End of quote...The Ivie family swore they would kill the next Indian of Chief Walker’s band they saw. Unfortunately he happened to be a friendly Indian and it was James Alexander Ivie who slew him. Grandfather regretted his rash act until his dying day which occurred on his 77th birthday, March 17, 1907 at his home in Salina, Utah.

I remember as a child feeling a sense of shame at the children calling my grandfather “Old Jim Ivie, the Indian killer.” My father died when I was eleven and it was mother who explained that Grandfather wasn’t the only pioneer who had had to protect his family against the Indians, nor to kill in self-defense, that he was a kindly man and a good neighbor. That we must remember how fine our own father was and that his father must have been a good man too to have had such a son.

From a centennial history of Sevier county called ThroughThe Years, I have found the following paragraph, quote: “Pioneer times were not without their “Doctors” - - His stock of medicines consisted of a pill bag, one or more lancets for an emergency and a “turnkey” used for extracting teeth. Those “painful” memories of early days having our teeth pulled by Jim Ivie our first dentist; his dental parlors were maybe in the harness shop, maybe in the kitchen. Brother Ivie would leave off his work any time to pull a tooth. That one pair of pliers did all dental work.”

James Alexander Ivie may have been quick tempered and impulsive but there was nothing hypocritical about him and he lived true to the family motto, “To be rather than to seem.