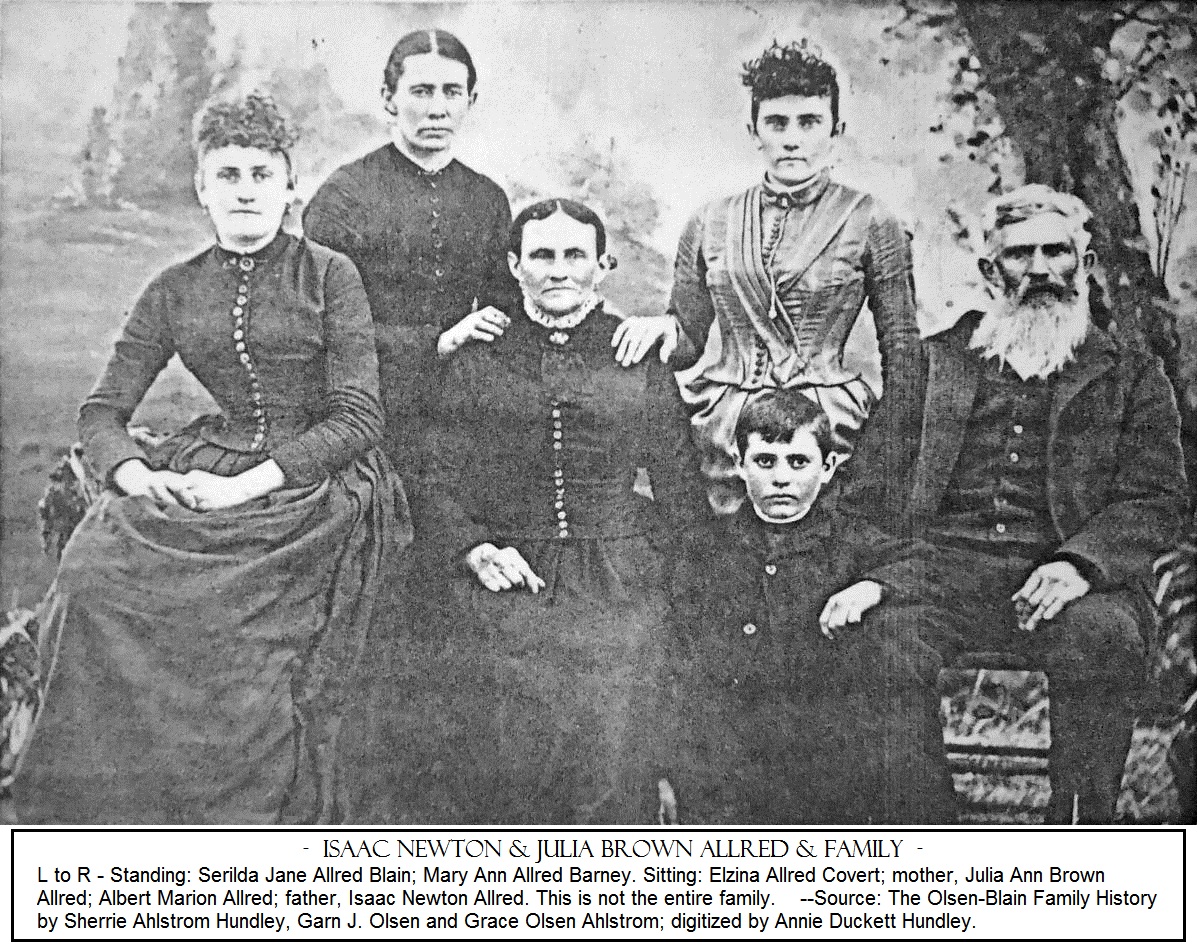 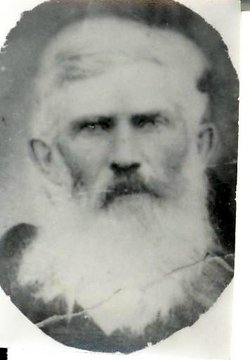 THE HISTORY AND MYSTERY OF ISAAC NEWTON ALLRED

(For thirty years, I have searched for information on this great, great, grandfather of mine. Many questions still remain unanswered. The following is what I have been able to find.)

ISAAC NEWTON ALLRED, son of William Allred and Sarah Ann Warren, was born Mar. 25, 1830, Bedford Co., Tenn. His family were old Southerners and wealthy planters. It has been said that Isaac N. was literally a “slave driver” on his father’s plantation. His family joined the Mormon Church in the early days, and went through the persecutions in Missouri and Illinois. His father and mother died and in 1861, the family came to Utah in Capt. David Cannon’s company of 64 wagons.

In 1849, Isaac N. married Julia Ann Brown, who was born in Pike Co., Ill. Nov. 26, 1833, daughter of Cornelius Brown and Mary Ann Cox. They lived in Illinois for about three years, then moved to Missouri. In 1858, they were back in Illinois, where their fifth child was born. After their sixth child was born in 1860, they removed to Iowa, intending to join the Saints in Salt Lake City. They stayed at Florence two weeks, waiting for the wagon train to leave. His daughter, Serilda Jane, says that she was just nine years old at the time and was ill all the way to Utah. She said that once the Indians stampeded the train and an old man was thrown from his wagon and killed.

Upon arriving in Utah, Isaac N. located with his family at Spring City where he bought a small tract of land, located at Third North and First East, and engaged in farming. He served as a city alderman of Spring City for three terms. He took part in the Black Hawk Indian War, serving as adjutant, and was in several skirmishes with the Indians. He made a trip to Green River while on active duty.

Soon after 1875, Isaac N. and his brother James Anderson Allred, among others, moved to Chester, Utah. The Indian troubles had not ceased when these pioneers first came there, and they never knew when their lives or property was safe from the Indians bullets and arrows. On July sixth and seventh, 1877, a co-op store was started in Chester, with Redick Newton Allred as president, and Isaac N. as superintendent. Two of his children were born in Chester in 1875 and 1876. His last child was born somewhere “in Sanpete Co.” He and his wife had a total of 14 children. His daughter, Serilda Jane, said that, “in 1873, the Spotted Fever broke out, taking five children in five months.” I have been able to find only one of these children’s graves. Where are the other buried? Where in Sanpete County were they living from 1867 to 1875? They had three children born during those years, and the records just say “in Sanpete County.” The one grave is located in the old Pioneer Cemetery in Spring City.

Isaac N. played the fiddle and entertained at dances and other social affairs. His fiddle is now on display at the Fairview, Utah Museum, donated by a grandson.

About 1880, Isaac and his family moved back to Spring City, for he was elected Justice of the Peace for the 1882-83 term, and elected again 1884-85. His wife, Julia Ann, died Nov. 20, 1898 in Spring City and is buried in the City Cemetery west of the City. There is room for her other children to have been buried there also, but the only marker is for her.

In this same year, he began buying and shipping produce and moved to Gunnison, Utah, where he owned a confectionary business. According to family legend, he once owned and operated a saloon in Christianburg, Utah, located just east of Gunnison, but no one from that area has ever heard of him being there, nor have they heard of his saloon. However, I have a set of stemmed bar glasses that were handed down to me with the admonition, “Remember, Tessie, these were used in your great, great, grandfather Isaac Newton Allred’s saloon in Christianburg.” This now forgotten part of his past seems lost to me. Did he live in Gunnison or did he once have a home in Christianburg where his saloon was located? How long did he operate this business?

Christianburg was first settled in 1873 by three Christensen brothers and descendants of these men still live there. In the 1880's it was known for the fruit produced there but this enterprise soon declined. The remains of an old chalk mine and roller mill, (which burned in 1920) are still visible. If there ever was a center to this town, it was divided by the new route of Highway 89. At one time, the settlers endeavored to build a large canal from Nine Mile Reservoir, through Christianburg on the north end and into Gunnison. They got as far as Christianburg, but it proved to be too large an undertaking, so the project was abandoned. The remnants of the canal can still be seen. Thirty-five thousand sheep once passed through the “Shearing Corral”, located on the old Vorhee’s homestead, on an entrance to Antelope Valley. This was “sheep country” and each year, sheep were brought from the West Desert, after wintering there, to be sheared.

Large and small herds were brought through Gunnison Valley to the southwest, around Chalk Hill, and up through Antelope Valley from the northwest, to the Shearing Corral. The area was also known for a popular Cotsword Merino breed of sheep. Some sheep are still kept on the Vorhee’s Ranch and other ranches in the area, but the main crops are alfalfa and grain. The Broken Arrow Ranch raises horses and cattle.

Whatever happened to this once-thriving small community, where the railroad had a spur to pick up the many large wool sacks; where there was once a schoolhouse, (now torn down), and where a chalk mine and roller mill once flourished? Some deserted old homes could tell us stories. Where did the people re-locate? Perhaps, to Manti or Gunnison or other communities where their future was more assured? I believe my ancestor Isaac Newton Allred was part of the history of Christianburg, but perhaps, I will never prove it.

Isaac N. died Nov. 1917, Clyde, Idaho and is buried there in a small “boothill cemetery”. Clyde, Idaho is no longer on the map. Many years ago I sent to Idaho for his death record, but they could find no record of death or burial. I know great grandmother Serilda Jane went to Idaho to attend his funeral. She brought my father back a small China dog. My father, Jesse Odell Blain, told me that Isaac N. was living with his daughter Mary Ann Barney, when he died, and thought he was buried at Mackie or Blackfoot, Idaho. Dad says he may have died there, too.