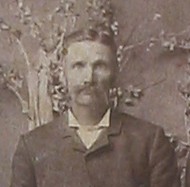 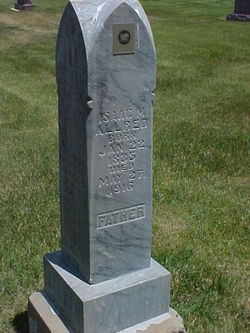 Isaac’s parents had lived in North Carolina, then moved to Tennessee where it seems that most of their children were born. There were four daughters and nine sons. The daughters’ names were Elizabeth, who died in infancy; Nancy Waaklyn, who married Asa Earl; Sarah Lovissa who married Allen Taylor, and Mary Caroline married Joseph Egbert.

The family were among the first early converts baptized into the Church of Latter Day Saints, some of them being baptized in 1832. They faithfully sacrificed from the first, being driven from their homes by mobs, who were hostile to the members.

Besides living in Monroe County, they lived in Clay and Caldwell counties. From Caldwell they were driven into Adams County, Illinois, in 1839, and from there into Daviess. In the spring of 1840, they journeyed to Nauvoo, the Beautiful. Here at the age of eight years Grandfather Isaac Morley Allred was baptized in the Mississippi River by a prominent member of the Church, a bodyguard of the Prophet Joseph Smith, viz, Zebedee Coltrin. This faithful man was at one time scourged by mobs for his loyalty to the Prophet.

The Allred families were personally acquainted with Joseph Smith and other Church leaders.. Great grandfather Isaac played a violin and was privileged to play it in the home of the Prophet. This violin came into the possession of his son Isaac Jr. and from him to his son, Alvin Ern Allred.

At the time when their revered leaders were on their way to Carthage jail, loving friends in Nauvoo were gathered along the roadside. Members of the Allred family were witnesses of their sad departure. Some of them heard the Prophet’s memorable words, “I go as a lamb to the slaughter.” Grandfather’s uncle James Allred, a bodyguard of the Prophet went with others to Carthage and rescued John Taylor, who was mortally wounded and removed him to Nauvoo on a sled drawn across the prairie, to prevent jolting. The bodies of the slain leaders were taken to Nauvoo at the same time, 27 June 1844.

Persecutions continued, the families soon thereafter were driven from their beautiful homes with other saints. In the spring of 1846, they moved to Council Bluffs, Iowa, and were living there when the Mormon Battalion was organized. Among the several men of the immediate family who joined were Reddick Newton Allred and his brother James Riley Allred. Cousins also joined the ranks.

It appears that great-grandfather Isaac with several members of his family traveled to the emigration company led by Captain Allen Taylor, husband of Sarah Lovissa Allred. They were wife, Mary Calvert Allred, and sons William Moore, Isaac Morley age 14, and Sidney Rigdon Allred, age 12. This company consisting of 500 souls, with 100 wagons was outfitted at Kanesville, Iowa, on 12 July 1849. They lived here for a short time. Following after, they traveled westward with their ox teams, arriving in Salt Lake Valley 16 October 1849. They lived here for a while in Salt Lake City and then located at Little Cottonwood, now Holladay. It was here that the tired little mother, Mary Calvert Allred passed away in 1850.