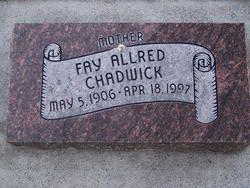 This book ("Allred & Johnson Family Memories" ) was produced for the children and grandchildren of Birt and Anna Johnson Allred to honor the 90th birthday celebration of their oldest daughter, Fay Allred Chadwick. The following tribute was given to Fay on her 75th birthday by her younger sister, Frieda Allred Hirst.

I was five years old when Fay was married on January 24, 1927, so I don't remember her much until later years. The dining room curtains were decorated with the blue baskets of flowers, I was told, were some she had appliqued. The curtains added a touch of beauty to the otherwise old, dilapidated home.

Fay and Chad came home for visits with their children, Chaddie and Colleen, at the ranch in Moab. Their children were always dressed so nicely. I remember the little gray suit with the short pants Chaddie wore and the black Roman sandals Colleen wore as a toddler. Chaddie (later called Chad) was six months older than our youngest brother, Claron. They played together when they were young, usually cowboys and Indians.

Fay and Chad lived in Price where Chad was part owner of an auto body shop. Their business stationery read, "You wreck'em? We fix'em." From Bertha on down to Afton and Claron, we spent our vacations at Fay's. This was an important event in my life and I thought Price at 12 years of age was a very big city. In fact, Price and Fay's home was an entirely different world from the one I knew. I looked forward to seeing my Price friends each summer and the fun times I had there. The thing I remember most was the delicious meals Fay served. I remember eating spaghetti one time until I thought I would burst, I still wanted more. Chad told me that if I ran around the block a couple of times maybe I could hold some more. This I did and came back and ate a little more. Whenever there was company, Chad told about Frieda and the spaghetti, much to my embarrassment. He was always teasing.

Because the shopping in Moab was so limited, Fay did a lot of shopping for Mother. Sometimes Fay would buy the material and bring or mail the dress down already sewn. I remember a beautiful green georgette dress she made for me with pink rose buds. It was the most beautiful dress I had ever seen.

Another time Mother had her buy me a winter coat. It was green with a brown fur collar. I was staying over-night with my girlfriend, Lenna Newell, but I came on home to see my new coat. "It looked like a million," I was told and it did.

The summer during the depression when Fay and the kids stayed with us at the South Mesa ranch, she made my school clothes. Mother didn't have the "knack" for sewing and I don't know what we would have done without Fay.

Many times Fay and Chad were imposed upon by relatives (an understatement). One such time was when I came down to Salt Lake City after attending school at Utah State University. World War 11 had started and I didn't want to stay in school because all of the fellows were in the service. I needed a place to stay until I found work. Fay always found me a bed, even if it crowded her family.

At such times when I needed advice, help in cutting up a chicken or companionship for a movie, Fay seemed like a second mother. Then for my wedding shower and wedding, Fay offered her home. Mark brought up dozens of red and pink peonies and we banked the fireplace for the wedding. It was a gorgeous sight.

Fay was left a widow at 48 when Chad suddenly died of heart failure. A very independent person, Fay asked help from no one. She lived and worked and went without many things the rest of us would consider necessary. At times, very ill, she trudged off to work whether she felt like it or not.

Fay showed charity for her immediate family, her parents and brothers and sisters and many friends and neighbors. Paul said, "Charity suffereth long, and is kind, charity waunteth not itself, is not puffed up. And now abideth faith, hope and charity, these three; but the greatest of these is charity." (I Cornthians 13:4 and 13:13)