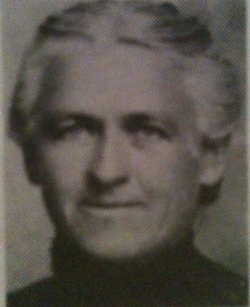 On March 10, 1866, in Deseret, Sevier County, Utah, a daughter was born to Wiley Payne Allred and Johanna Olsen Allred. She was named Hulda Deseret Allred. She was the oldest girl in the family, having five brothers and one sister. The sister and one brother died as children. They were as follows: 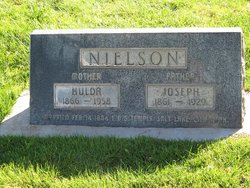 Her childhood was a very hard one. The first eight years of her life were spent in Deseret. From there the family moved to Spring City, Sevier County, Utah. Moving by wagon and oxen was a very exciting time for the children, and a trying time for the grown-ups. The Indians were still trying to accept the Mormons as friends, but in their savage way it was easy for them to forget and cause many discomforts for the pioneers.

The first and only school she attended was a Mormon school which was held in a one room log cabin in Spring City, Utah. She was between eight and nine years old at the time. A cousin, Miss Allred was hen first teacher. They had no pencils and only one text book. They used slates to write on. The teacher would sit in the seat with each pupil, spell a word, then the child would spell it after her. With only one text book the teacher would go around and let each one read out of the book in turns. Giving them little chance to read it, except when their turn came up.

Her father was one of Joseph Smith’s body guards and very sincere in his religion. The only book she could remember in her house was the Bible.

Among the other things she could remember in her early life was the lights they had. It was a home made candle which was made, not from wax, but by wrapping a cloth around a button and setting it in a saucer of grease. They called it a “bitch”. Wood was their only fuel. The food was similar to what we have now except not so extravagant, and sometimes flour was very scarce, and sugar was almost unknown. Their clothing was plain and substantial, made out of material that would wear well. They carded wool and knit it into garments. The wool was from dead sheep and off the bushes where the sheep had gone. Clothing was very expensive and wages low. Calico was sixty cents a yard and wages thirty five cents a week. She had one dress at a time and if she was going any place it would have to be washed and ironed so she would have something clean to wear. The children went barefoot all the time, even in the winter because they had no shoes to wear. The farm implements were very crude and all homemade. The plows, a cradle or cutting the grain, and a scythe with which they cut the hay by hand and a harrow with wooden teeth.

Many times during her childhood she had seen the Indians attack their settlements. During the time when they lived in Spring City the Indians came to town and killed a man. A little boy eight years old crawled on his stomach for two miles, so the Indians would not see him, and got help to drive them away. She was well acquainted with Black Hawk, and said he was very friendly with the white people when the Indians were not on the war path.

Her father was a polygamist with a large family. As the children grew up and were able to work out, they were required to do so. She often went with her father, the community doctor, to assist him with nursing as he made his rounds. More often, though, she worked for other families for her board and room.

One instance that remained with her throughout her life was when she worked for a woman who was an epileptic. This lady had a very large family, and when they saw a seizure coming on , they would throw her down the cellar. Hulda would have to go town and take care of her. She would try in every way she knew how to comfort her. She worked for this family for many years, taking care of the smaller children, cooking, cleaning and other household chores.

Hulda and Joseph [Nielson] were among the young people who grew up in this pioneer settlement. Joseph was born in New York shortly after the boat landed which brought his father, mother and two sisters from England. Joseph’s family joined the Mormon Church and made the trip across the plains to Salt Lake City. They were later sent with others to pioneer and settle Emery.

The conditions under which her hand was won in marriage brings a chuckle to all who hear it. Her father and her suitor were considered champion checker players. In the order of the day, Joseph approached her father with the age old statement, “Hulda and I would like to be married.” To which hen father replied, “Only if you beat me in a game of checkers.” Joe won and Grandpa Allred had to concede to give his only daughter to him in marriage -- which he did with his blessings.

Now was the time for great preparations. The quilting and sewing bees hummed with activity, for before there could be a wedding there had to be linens, and utensils assembled for the lucky couple. Everyone was concerned about the bride while the poor bridegroom was worrying about himself. He had two teams of oxen. In order for him to marry the girl he had so gallantly won, he would have to raise some money fast, so he was forced to sell one team of the oxen for the needed money. This he did, and in due time everything was settled and the wedding was about to take place.

They had to go to Salt Lake to be married. Two cousins went with them to be married at the same time. It was February and very cold. The was made in a covered wagon. There was lots of snow and they had to shovel a road through the canyon. While the men shoveled, the girls ran up and down the railroad track to keep from freezing. One of the men would sit in the spring seat and drive until he got too cold and then the other would take his place. The rest sat back on the wagon and curtain divided them from the driver. One man drove too long and went to sleep. They had to beat him and walk him up and down the track to keep him from freezing to death. They were married in the Endowment House in Salt Lake City February 14, 1884.

They first lived in Spring City, where Betsy Johanner was born 2 Dec 1884. A year later they moved to Emery and built their first home on the banks of the Muddy River. Here Helena Deseret (Lena) was born 15 Dec 1887 and Joseph Wiley Payne was born 20 Dec 1889. After which they moved into the town of Emery where Elva was born on 23 Aug 1895 and Floyd Rueben was born 28 Nov 1897. When it was time for her children to be born, Grandpa would have to go ten miles to get the nearest mid-wife.

Her life was full of hardships. She herded pigs and cows and helped with the harvesting of grain with a cradle and scythe, binding the sheaves by hand. She would take her small children, each with a sack, and out to the wheat field after it was harvested, and glean the heads that were left. People were very charitable and considerate of each other then. The men would exchange work in the fields as they could not afford to hire help. The women always gleaned the fields after the harvest.

Her father and his sister were both doctors and it was through them that she began her nursing career, which was her occupation for many years. She delivered over 300 babies and only lost one of them, and only one mother.

In 1900 there was land opened for home-steading in Debeck, Colorado. There were six families from Emery who decided to take advantage of it. They gathered up their meager belongings and loaded them in their covered wagons and headed for Colorado. It took them two weeks to make the trip. When they reached their destination, many heartaches awaited them. There was no land available. They had to live in tents, and since they were Mormons no one would give the men work. The women had to work and care for the families...

Grandad tried farming but was unsuccessful in his attempts. After staying there one year and enduring the humiliations (people would not associate with them because they were Mormons) and hardships they made the arduous journey back to Emery, Utah in December 1901. The family remained in Emery for 14 years...

In the spring of 1914, this sturdy pioneer family again decided to try their luck with homesteading. This time the land was located in San Juan County, Utah. Also there were more Mormon settlers there and they felt they would be more welcome than when they were in Colorado. Gathering the Hansen family with them, they decided to make the trip and be there in time for Spring planting.

They left Emery on April 13, 1914. There were eight wagons in the group. Seven wagons were loaded with household belongings and farm equipment, leaving only one wagon for the entire group to ride in. Thus it was necessary for some of them to walk at all times...

Upon arriving at their destination, they found they were more than welcome, and there was land in abundance, but there was the need of money to buy the land or pay their homesteading fees. With only $20.00 in the entire group, it was necessary for them to mortgage their horses and other livestock to pay these fees.

The tiring job of clearing the land and plowing and planting began in earnest. The building of homes became a secondary matter. The homes were built after the crops were planted, assuring them of food for the following year.

“Upon arrival, Grandma assumed her duties of midwife and doctor for the surrounding country...

During her 92nd birthday a reunion was planned for her immediate family. Everyone was looking forward to it with great anticipation. However this was never to materialize for on the morning of May 23, 1958, Grandma passed away. Her mission on this earth was fulfilled.....

May she look down from her throne on high and guide us a little each day throughout our lives, that they may be as full of the happiness and riches she herself knew throughout all 92 years of her service upon this earth.

These above history was condensed from a history of Hulda Deseret Allred Nielson written by a granddaughter, Desie Nielson Oviatt, and presented to the Allred Family Organization by: