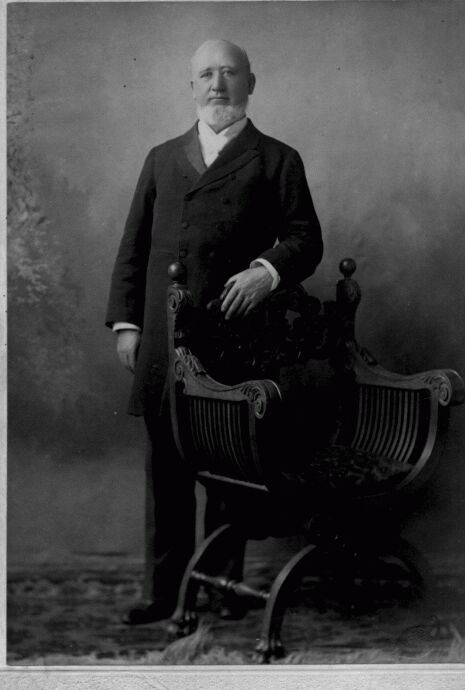 When “Q” was about four years old his mother made him a pair of pants from flour sacks which had the brand still on them. Because he loved running off to the neighbors without telling anyone, his mother got the idea of printing a sign “Spank this boy and send him home” on the back of his pants. Up to his old tricks, off he went, the neighbor read the sign, spanked him and sent him home. “Q” became a good boy for sometime after that.

As a young boy, “Q” was very agreeable, had clean habits, never got into mischief and was well liked by all the boys and girls. He graduated from the 8th grade while attending John Frank Allred School. His penmanship was not legible, however his did enjoy reading novels, history and literature. A sister, Elizabeth Elmira, tells of this experience he had while attending school, “Q” struck a match that made a loud pop in the classroom and teacher, John Frank Allred, asked the party who struck it to come to the front of the class; “Q” got up reluctantly, Elizabeth Elmira and Aurelia, his sisters, were afraid he would get a spanking. So they followed him to the front of the classroom hoping that Mr. Allred would not spank “Q” in their presence. Mr. Allred gave him a good talking to and latter told “Q’s” father, James Tillman Sanford Allred, Jr., that he would have given this young man a good whaling had it not been for his sisters.

“Q” was a great one for making fool valentines. After he finished one he would tie a string to it and then take t to some young ladies door and yell valentine , then when the young girl would go to pick up the valentine he would pull the sting.

He was always very considerate of his parents, tender-hearted, affectionate, a good worker and loved to wrestle, play baseball and was a very good foot racer. Singing and dancing were pleasures that he enjoyed but unfortunately he had no talent for either of them. For recreation he attended church socials, candy pulls, house parties and danced to the music of a fiddle in private homes.

“Q” assisted his father with the daily farm duties until he was sixteen years old and then started herding sheep. He loved horses and handled them well, he always had his own team and took good care of them.

Quoting from a letter George Quail Cannon Allred wrote to his daughter Elmira Aurelia Roberts on April 16, 1951. “I married your mother, Lena Nielsen, daughter of Jens Peter Nielsen and Maren Peterson, at the age of twenty years and eleven months old, in Manti, Sanpete County, Utah, on November 6th 1895.

Our first baby was a boy, Fenton Doyle, born April 15, 1897 in Spring City, Sanpete County, Utah. When Fenton was a year old, Canada was opened for homesteading and in April 15, 1898, I and three other men left by team and homesteaded at Mountain View, Alberta, Canada and swore allegiance to King Edwards by kissing the Bible and then became a citizen. Later I received title for my homestead and worked my farm in the summer and during the winter worked at my trade as a lumberjack. My wife, Lena, and son joined me in Canada in August of 1898. They traveled by way of the railroad and stage.

Made a trip back to Utah in the fall of 1899, to see father, who was very ill with Typhoid Fever, then returned back after a weeks visit. My purpose for going to Canada was to settle and make it home. The Canadian Government was very kind to us as new settlers. On January 27, 1900, a daughter, Elmira Aurelia, was born.

In 1901, I helped to build a canal out of the St. Mary’s River to Raymond, Alberta, Canada, it was one of the Jerry Knight projects. On the farm we built a fairly good house and out buildings, just one-half mile from Mountain View. Father and my brother, Oliver, came in a surrey, driven by two men, to see us. When they arrived Father was very ill and unconscious and the following week on August 11, 1902, he died. We were unable to embalm him and because it was a Canadian Law, we buried him there in Mountain View.

Another child, Rex “N”, was born on May 30, 1902 in Mountain View and the following October my wife and family returned to Spring City, Utah. I intended to stay in Canada until my wife returned but she was taken very ill and I returned to Utah on December 12, 1902. I left my brother, Oliver, behind to sell some property. He later returned to Utah on January 3, 1903.

Lena was very ill for sometime and did not want to return to Canada, so we did not. In 1903, I went to Rolls, Wyoming to sheer sheep. After we finished sheering, I worked at a camp handling horses. My wife became very sick again, so I returned to Spring City in 1904, rented Mothers farm, bought me a small team of mules and farmed and worked the timber.

In 1905, the Ute Indian Reservation was opened to be settled, I registered and drew a number which permitted me to file a homestead. Out of quite a number of persons registering, I was the only one of Spring City to have a filing number. My number came up in October and I filed and came back from Spring City. In 1906, Daniel Larsen and I chartered a railroad car from Spring City to Price, Utah, in which we loaded teams, wagons, household furniture, flour, alfalfa seed and potatoes. It cost us $50 a piece. On April 10, 1906, we left for Price, arriving at my farm on the 17th. A number of us knew the river and made a canal out of the Uintah River and a successful crop that year.

In June, I went to Helper, Utah and brought my family to our ranch, which was located on the west from the Whiterock Agency. On the way, we stayed overnight in Indian Canyon, by a sawmill, where I took the job of chopping and putting the logs on skidways, which I did until September 8, 1906, and then headed for the ranch.

Their closest neighbor while living at the ranch near Whiterocks, Utah was the David Austin Elmer family and through the years their oldest daughter, Mary (Mamie) Elmer, came to assist Lena and her family during Lena’s illness. On January 6, 1909, Lena died in Hayden, Uintah County, Utah.

Mamie Elmer came in and took over the household duties and later, on June 9, 1909, became “Q’s” second wife. This was a real challenge to a young girl of just twenty-one years of age, but the children accepted and loved her very much. Her own first child was born on January 5, 1910 and they named him Oliver Tillman. Mamie was a fine bread maker and taught many of the surrounding Indian women to make it. They had a daughter, Myrtle Irene, on August 25, 1912 and a son on July 28, 1914.

The ranch proved to be quite successful but due to misfortune, they lost the ranch and moved to Cedarview, Duchesne County, Utah. Here “Q” raised Sorghum cane which they cut with butcher knives and loaded on a wagon to be taken to Robert Powell’s, a distance of four miles and put through an old fashioned press which was run by a horse. “Q” helped build the Cedarview Canal and also found a coal mine which he developed himself. He was still a lover of horse racing and enjoyed racing with the boys.

Robert Powell helped the family move from Cedarview to Sunnyside, Carbon County, Utah where “Q” worked at the Sunnyside and Peerless mines. Here “Q” had his first real sickness. Another son, Delos was burn to them on September 14, 1923 and the following March 9, 1924 daughter Mamie Pauline died of bronchial pneumonia in Stores, Utah where she was visiting with her Aunt Hazel Elmer Pace, Mamie Elmer Allred’s sister.

Mamie and her family then moved to Hayden, Utah while “Q” stayed in Sunnyside for two years and worked in the mining camps. Through the help of others, Mamie became interested and in turn interested her family in the beliefs of the church of Jesus Christ of Latter Day Saints.

After several additional moves “Q” and Mamie moved to Bingham, Utah where”Q” worked as a guard at the Utah Copper Mine. From there to Ogden, Utah where they lived in a tent for three months until the housing area, Washington Terrace, was completed. During that time “Q” worked as a fireman at the Ogden Arsenal.

“Q” returned in November of 1943, and bought their first permanent home in Clearfield, Utah. Here they spent many good years together with their children and grandchildren. On February 20, 1955 “Q” died suddenly of a heart attack and was buried in Hayden, Utah cemetery. Three years later Mamie died of cancer on July 28, 1958 and was buried along side her husband.