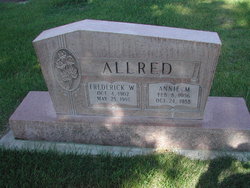 My Grandfather, Fredrick Wade Allred was proud of his heritage especially his British upbringing. I would like to start in 1832 when Isaac Allred of Tennessee and his wife Julie Ann Taylor of Kentucky settled in the Salt Lake valley and had ten children, four boys and six girls. One particular son, John Allen Allred married MaryJane Knight and settled in Slaterville in 1855 had eight children, 4 boys and 4 girls. The oldest was John Franklin Allred and a younger brother was William Martin Allred ( or my Grandfather's Uncle Bill). John Franklin married Isabella Jeanette Wade on December 20, 1884. They had three children Sarah, Alfred John and Fredrick Wade Allred. Grandma Wade was forty-one when she had Grandpa, their last child. His sister Sarah was twelve and his brother was eight. She was British and Grandpa received his British upbringing from her where table manners, lady fingers, mid- morning and afternoon tea were routine.

Grandpa enjoyed his early childhood on the farm. He wrote, "I learned to ride a horse as soon as my legs could straddle a saddle. There was always something to do, ride the horse, get the cows, help milk, drive the team on the hay wagon, pick apples, and pears. Always something, even watching the horse- powered thrashing machine."

Like most five year olds he wanted to attend school like his brother and sister. One day he had a fit because he wanted to go to school. Grandma Wade fixed him a lunch and sent him to school with his brother. The teacher sent them both home as he was not old enough. At six years his father gave him a watch to teach time and gave him his first chore. He had to get the cows at five o'clock and bring them in by six o'clock for milking.

When he was eight years old his Dad and his friend Henry Holley baptized him in the creek near the cow barn in Slaterville. At the age of nine his father was called to a mission. His father rented the farm and moved his mother, brother and him to Ogden. He returned

in 1913, kept the house in Ogden and worked. The farm was still rented. After a year his father took the farm over. He rode the horse and buggy back and forth from town to the farm. In 1915 his brother was working at a Ford dealership. They bought a Model T Ford touring car. This was their first car. At age 13 he learned to drive. He spent the summer helping his father on the farm. When school started he went to school in Ogden. After he graduated from the 8th grade he attended Weber academy, a church high school. One trip he remembered was when he went to see some friends in Teton and visit his Uncle Bill in Rigby. He packed his bed roll and twenty-two rifle and rode the train.

While working on the farm in Slaterville he became friends with his neighbor George and Hattie Hodson. Hattie had a sister named Annie May Gibson. When he saw her, he wanted a date with her. In the spring of 1922 he graduated from high school. He worked on his father's farm. That winter his father became ill. He had to work the farm himself, but had a free hand to the Model T so he romanced my Grandmother.

During 1931 to 1939, the depression years, things were hard. They had very little money. But they did have 15 milking cows and living on the farm they were able to manage. In 1939 he bought his first tractor. He wrote, "I used the tractor to plow, cultivate sugar beats and mow hay, and disc. My wife Ann worked hard on the farm. She would help me milk the cows." They took two ten gallon milk cans in the Model T to town..

In 1940, the Army came to the Ogden-Slaterville area and put in a Army Supply Depot. It took 2/3 of his farm. He had a legal battle with the Government to get fair market value for the farm. The water rights were poor. So he went to Uncle Bill's to visit in the winter of 41. He and uncle Bill walked to the farm in Rigby. Uncle Bill said the land of eighty acres had first water rights and good ground. So he sold the farm in Slaterville.

Early in March of 1941 Grandpa came to the farm in Rigby to begin working on the barn. Grandma, Jack, Bea and Wade all stayed in Utah to milk the cows. On March 29, 1941 they milked the cows one last time in Slaterville and headed to Rigby. They milked the cows that night on the new farm. Spring came early that year, so they started planting crops. They had a team of horses and Allis Chalmer tractor in those day a lot of power. As we talk about Grandpa through this time it is easy to see how innovated he was. He often talks about his family and him getting many things first. I can even remember my own father saying they were one of the first to get a phone and radio and TV. My last trip with Grandpa, I picked him up in Rigby a year ago for Easter at my parents. Worried as always my mom called me on the car phone, Grandpa had just got me out of Rigby without getting lost. Grandpa said from Horse and buggy, to cars and airplanes and now phones in the car he had seen it all. He informed me that he never had a phone in the buggy and he had a lot to say about that.

On August 21 1942 the last child, Ann Jeanette was born. The children were all raised in Rigby. The farm raised hay, grain and potatoes. Harvesting was done by hand during the war. They only had the help of a one row potato planter, potato digger and tractor cultivator all pulled by the tractor. Of course Grandma would go to town and find many vacationing school kids to help. I guess Grandpa and Grandma thought everyone needed to learn how to work hard. The one thing that has been pasted on for many generations was the work ethic they both had. While World War II was going on they were rationed on gasoline, shoes, sugar and flour. My dad, Wade, has said many times that they never went without ice cream and fudge around. He said his parents always had enough for Sunday dessert.

They became very active in the 5th Ward where Grandpa served for 16 and half years as Secretary. He also was a home teacher. He received an award for never missing a Sunday in five years. I think he inspired many then because as he aged a special home teacher Aaron Fife often came to visit him.

He wasn't however all about work. Grandpa always had stories to tell. He tells about a time while in Slaterville when the Bishop gave him two tickets to a pageant held at Salt Lake Tabernacle. He, Grandma and some friends went to Salt Lake. While touring the grounds they saw David O McKay. He asked grandpa where he was from and his name. We he said were are the Allreds, David McKay remembered that name as he had spoke at Sarah's funeral. He gave them two tickets so they all could go. Grandpa always talked of the things he did the places he had been and of the many things he read about.

When things on the farm were quiet he would go fishing. He liked to be in the outdoors. I remember when my dad Wade and brother Allan purchased land in Palisades, they were very busy working on the property. Grandpa came to see us one afternoon. He decided to take me fishing on the reservoir. As he tied on a worm, he began to tell me about what the valley looked like before there was a dam. His ability to described a place made you feel like you were right there. I remember saying I wish they would have never built the dam and ruined the beauty. He said it is still beautiful just different. He knew about places that he had never been because he had a passion for reading. I remember when my son was born a friend sent t a five year subscription to the National geographic. When I sent grandpa a Christmas card I mentioned this. When I saw him later he told me the value of the National Geographic in a boys life. He said many things are learned from reading.

Grandpa and Grandma always had grandchildren around. As a child grandpa often got home sick when he was away. One time he got so homesick. He started walking home. Somebody gave him a ride and soon they found his father in the buggy. His father never scolded him about being homesick he just shook his head. I had to laugh when I read this, because Grandpa and Grandma often brought me to Pocatello long enough to see my dad, the homesickness was gone and back I went. Grandpa only said "This time bring more dolls".

He lived to see 4 children, 13 grandchildren, 30 great-grandchildren, and 2 great-great grandsons born. He also saw the Haley Comet twice. He lived a life where hard work, family and friends were everything.