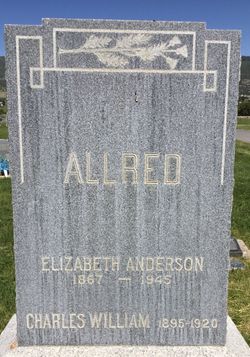 My mother was born in Fairview, Utah, March 10, 1867, one of ten children born to Archibald Adamson and Sarah Jane Rees Anderson. When she was eleven years old, her mother passed away leaving a month old baby, Archibald Henry. He was a sickly child, so during her girlhood, my mother spent a great deal of time helping to care for him; therefore, her schooling was limited.

Mother was married to Martin Wilford Allred. Not much is known about their social activities; however, they were very close friends of Aggie Anderson and Albert Christensen. The two couples traveled by team and wagon from Fairview to Logan to be married in the temple on December 12, 1884.

After their marriage, they settled down in one side of a home that Father and his twin brother, Ike (Isaac Willard), had built the year before. Aunt Lena (Helena) and Uncle Ike were already living there, since they were married the previous year. Father and Uncle Ike had always been close and marrying sisters made it doubly so. Mother said that it was hard for father to be away from Uncle Ike for very long at a time.

Soon after mother's marriage, Brother Fred Christensen came to her and Aunt Lena, asking them to take two little girls he had brought back from his mission in Denmark. The children's parents intended coming to America the next year, but they didn't get here for twelve years. Mother took Victoria (Tory), age six, and Aunt Lena took Ollie, age four. Mother told how they drew cuts to see which one they took; neither child could speak a word of English at the time.

Mother and Father lost their first child, Martin Archibald, because he was born prematurely. They also lost their second child, Aaron Wilford, at the age of three. This was a great loss to them. Three more sons, Randall, Sherman, William, and two daughters, Velora and Ethel, were born to them.

In 1900, they moved to Canada, following Uncle Ike and his family. The brothers were partners on a farm. Four years later, Father took very ill with appendicitis. They talked of taking him to Lethbridge for an operation. Very few operations were being done at that time, and he didn't want to go. On February 3, 1904, he passed away, leaving mother with a family of five. She knew that it wouldn't be too long before Randall, who was then fourteen, would be able to help care for the family. But on November 12, 1906, at the age of sixteen, he as accidentally killed in the Raymond Sugar Factory. This was a terrible tragedy for Mother. Her health failed, and she was very ill for a couple of years. Father's brother, Lawrence, was there at the time, so in July 1907, he brought the family back to Fairview.

Mother was always deeply religious, living the Word of Wisdom to the letter. Her life was a life of doing for others. She always saw that we had clothes and she would go without things for herself. She was a Relief Society visiting teacher most of her life. In those days, there was the caring for the sick and taking care of those who had passed on. Mother, being good at sewing, helped alot with sewing for burials.

Mother seemed to have a way of rising above adversity and trouble. Although things were hard for her, she did not complain and didn't want her children to. Since she was left with very little money, she did what she could to help out, mostly sewing. As the boys grew older, they were able to help out. It wasn't long until Sherm got married and Bill went into the service during World War I. When Bill returned to finish his schooling, he took a job in a mine at Hiawatha. Mother was again to receive another tragic blow, for on October 23, 1920, Bill was killed in a mining accident.

Mother had kept a little apartment in Fairview all these years since coming back from Canada. After her family had married and left, she wasn't there much of the time. She went home in the summer, so her children could have their vacation there. In 1932, she gave it up and spent the rest of her life with her children. She was a wonderful Mother, always trying to do what was best for her children and trying to keep them on the straight and narrow. She endured much and kept the faith to the end.

She passed away at Provo, Utah, May 4, 1945, of diabetes, a disease she had for thirty-five years. She was seventy-eight years old.

Elizabeth Allred, in the name of the Lord Jesus Christ and by virtue and authority of the Holy Priesthood, I lay my hands upon your head and confer upon you a patriarchal blessing and say unto you that you are of the seed of Ephraim, are entitled to all the blessings according to your sex. I bless you with vigor in your body and in your mind that you may live long upon the earth and accomplish the purposes God had in view in bringing you here in the flesh. I say unto you, when the opportunity occurs, be a comforter and an aid to your husband and be diligent in teaching your children as fast as they are capable, the principles of the gospel of Jesus Christ both by precept and example. I bless you that if you will live for it you'll enjoy the Spirit of the Lord that it will be a monitor and a guide unto you in all the affairs of life. I bless you that you may understand the principles of the gospel, that you will be a counselor to your husband and that you will be a teacher unto your children both by precept and example and those that you are associated with, seeing your good works, will glorify your Father in Heaven. I bless you with health and strength in your mind and body that your life may be long upon the earth and be diligent in keeping the commandments of God that ye may always have the good spirits with you. And I say unto you, try and have words of comfort for those that mourn and those that are careless and indifferent, try and have words of comfort for them. I bless you to read your scriptures and understand the principles contained therein and remember the Sabbath Day to keep it holy and that six days you shall labor and do all thy work and the Sabbath you will try and keep it holy and teach others to do so. Seek unto the Lord that you may have power over your weaknesses and that you will be a comfort in teaching and instructing your own family. I bless you to live and enjoy and to overcome that you may be prepared to return back to the presence of God your Eternal Father. I bless you to enjoy the blessings that are in the House of the Lord which I bless you to enjoy in as much as you are faithful which I bless you to be faithful in the name of the Lord Jesus Christ, Amen.

**Typed from a handwritten copy of the above blessing which is in the possession of Darwin Howell.