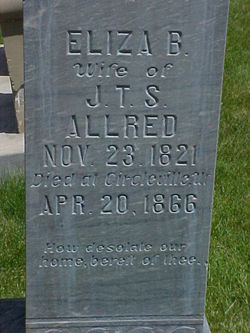 Eliza Bridget Manwaring was born Nov. 23, 1821 in Herfordshire England the daughter of Edward Manwaring and Margaret Nash. She joined the Church of Jesus Christ of Latter-day Saints and came to America as a young girl. She married James Tillman Sanford Allred Nov. 23, 1845 and when he became a member of the famed Mormon Battalion on July 16, 1846 she willingly joined him on the long trek.

With company A, they went to Santa Fe, New Mexico from which place they and others journeyed to Pueblo. Eliza was ill a great deal of the way and they had no wagon. An elderly couple shared their wagon with her. She gave birth to a baby boy which died shortly after birth, but the company could not stop while her husband buried the infant. He was so weak from exhaustion and exposure after the burial that he could hardly catch up with the rest of the company.

Soon after they came to the Sale Lake Valley they were called to help settle Sanpete County, reaching Manti in Nov. 1849 with a company of thirty people. Here two children were born in a dugout on Temple Hill. On the 22 of March 1852, they moved to Spring City, Sanpete County, being among the first to settle there.

In 1855 James T.S. was called to the Las Vegas Mission and in Nov. returned to Utah for his wife and family. One son was born there. They stayed two years and then returned to Ephraim.

In 1864 James T.S. was called on a mission to the Indians in Circle Valley. Here Eliza died on the 20th of April 1866, shortly after giving birth to a baby girl. On account of Indian troubles she was buried at sundown of the same day. Later her body was moved to Spring City. She was the mother of ten children.