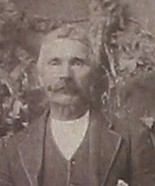 Dedicated to the Memory of Phebe Draper Palmer (Brown). In grateful appreciation for the great sacrifices she made to remain steadfast in the Glorious Principles of the Gospel of Jesus Christ, and for the fine heritage she left us and to George Palmer Jr., her husband [He died in Canada. She married Ebenezer Brown, 2nd Sergeant and went with him and worked in the Mormon Battalion to California and back to Utah.]

Rhoda Ann was a small baby when her mother took Her from Canada to the United States to join the Saints in Missouri and Illinois. She grew up with the experiences of so many pioneer children, among persecution and suffering. When Rhoda was 12 years old her mother joined the Mormon Battalion as a Laundress and cook. It is said by several of the Allred and Isaac Palmer descendants that she then went to live with Isaae Palmer, and pos sibly remained with him until they reached the Utah Valley. Her father having died before they left Canada, it is said that Isaac was a brother to her father George.

At the age of 17 on the first day of Jan. she married Joseph in Salt Lake City, Utah.

Joseph was born at Allred Settlement on the Salt River. As he grew up in those troublesome
yet glorious days of the newly restored Gospel, he also shared with other members the dangers and hardships of the early Saints. But he enjoyed the sweet spirit of peace in his home where his parents were faithful and true to the Gospel. When he was fifteen years of age, the Saints were forced to move westward. Three months after his sixteenth birthday he entered Salt Lake Valley with his parents and Brigham Young.

Rhoda and Joseph made their home for a while in Draper, later moving to Kaysville, Utah. About eight years later they joined the other Allred families and went into Sanpete County and
settled in Spring City. They were the parents of 12 children, five of them dying in infancy or early childhood.
Source: Early Ch. Rec, Sarah Hunt, Index Bureau, other descendants.

CHILDREN of Joseph Gilbert A1lred and Elizabeth Allen B 4 b. Thatcher, Graham, Ariz.

Joseph Gilbert was the first of 12 children, eight of whom grew to maturity. They grew up together in the towns of Draper, Kaysvi1le, Nephi and Spring City, Utah.

At the age of 21 he married Eliza Ann in the Endowment House in Salt Lake City. Ten years later after four of. their children were born, he and his family joined an immigrant train leaving Kaysville. They were eight days and nights in travel, arriving in St. David, Cochise, Arizona at midnight. Early the next morning following their arrival, Eliza Ann walked a short distance to the San Pedro River and cried because of the lonesomeness of the desert country. They remained four years in St. David. First they lived out-of-doors, sleeping in tents until adobe houses could be built. There had been a prophecy made to these people that there would be much water in this country. Some time after their arrival there, an earthquake cracked open the barren ground and springs came up in many places. Their son Christopher was at the river gathering pebbles and saw this happen. Some dirt fell, but the adobe houses did not crumble. The dishes shook good, however. The people then built houses around the springs and here they would float pans of milk to cool in the spring houses. Their daughter Sarah tells of trapping quail with her brother Christopher and going into AContention@ with their father as he took in loads of Prairie hay to sell. The children took the quail to the can-can and sold them. This money they earned was their own for special treats and treasures.

Joseph was away from home a great deal, freighting and helping other immigrants in their trek from Utah to Arizona and Mexico. In the story of George Albert Martineau, mention is made of "Joe Allred who was helping transport horses. They unloaded at Tucson and changed to the Spur Line running to St. David. The final unloading point was a small Mexican town, Contention.

About 1887, Joseph with his family moved to Thatcher, Ariz. St. Joseph Stake Center had been moved to Thatcher prior to this time. In Thatcher, they opened a general store which Eliza Ann managed. Joseph still did some freighting and enjoyed speculating. He lost a good deal of property, both real and personal. He at one time had an excellent string of thoroughbred horses which he lost in speculation.

His beloved companion and helpmeet, Eliza Ann, died in 1903 (there were four living children). After her death, he married Elizabeth Allen; there were five children by this union. Following Joseph's death, Elizabeth married Joseph's brother George; they had two children.

Joseph passed away at the age of 62. In spite of his many disastrous business ventures and his speculating, he left several hundred acres of improved farming land to his posterity.

Joseph was a quiet, easy-going personality who tried very hard to provide the best for his family. He contributed a great deal in the settling of the Saints in Arizona, not only by moving his family to such desolate country and helping develop it, but also by helping friends and neighbors establish themselves in a new country.