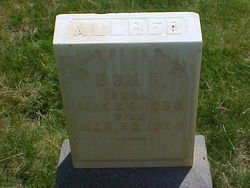 Don Thurber Allred was born on the 24th of May 1883 in Spring City, Sanpete County, Utah to Sanford Allred and Annie Eliza Robinson. He was their second child having a brother, Cyrus Edward Allred. He married Annie Pearl Madsen on 30 of Dec 1911. They were unable to have children of their own and so Don loved and helped care for his brothers five children and they all have memories of their special times spent with their Uncle Don.

We often hear of snow slides in Provo Canyon and Don Thurber Allred was the victim of a slide threat at Bridle Veil Falls.

From the Salt Lake Tribune dated March 30, 1924: Provo, March 29: More than 100 men worked incessantly all day in Provo Canyon in an effort to find the bodies of Don Allred a resident of Lakeview, and Mark Hyslop of Grandview, north of Provo who were caught in one of the heaviest snowslide known in the history of the canyon at 9:37 this morning. The bodies had not been found when darkness stopped work.

In addition to the missing men, Leonard Sutherland 19, and Ben Carter, 60 years of age and Spencer Madsen 28 years of age a brother-in-law of Don Allred were badly bruised by the flying chunks of hardened snow which knocked them down in their race for life.

The slide occurred at Bridle Veil Falls, being the second one to have dropped over the great mountain within twenty-four hours. The first one occurred Friday morning burying the Heber branch of the Denver and Rio Grand railroad with more than fifty feet of snow.

It was the snow from this first slide that fifty men from Provo was attempting to clear from the railroad tracks when the second one roared down through the canyon over the falls, carrying with it mammoth pine trees and huge boulders and even the body of a large mountain Wolf was found in the outer edge of the mountain of snow this afternoon. A watchman with a shotgun was stationed on the opposite side of the mountain to watch for any movement of snow. A terrific wind was blowing snow in all directions prior to the roar of the avalanche. The report of his gun, however, was heard and almost simultaneously the blinding snow was covering the workmen.

As soon as the report reached Provo rescuing crews were formed and more than 300 volunteers were carried in automobiles to the scene of the disaster. Throughout the day they worked with probes and shovels in an effort to locate the missing men and giant powder was used in an effort to cut a channel along the course of the river which found its way under the fifty feet of snow. This continued until dark when watchmen were left to watch the river for the bodies.

APRIL 2, 1924 Salt Lake Tribune: Slide Gives up Hislop’s body. Found on North side of Provo River; Neck and jawbone both broken. Four days of constant work on the part of a large crew of men at Bridle Veil Falls in Provo Canyon resulted today, April 1st, in the finding of the body of Mark Hislop, 22 years of age who with Don Allred was buried in the most terrific snowslide in the history of the canyon Saturday morning. The body was recovered at 5:20 this morning on the North side of the river at the extreme northeast corner of the slide, covered by six feet of snow with the feet projecting into the stream. Work will continue tomorrow in an effort to recover Allred’s body.

SALT LAKE TRIBUNE, SAT. APRIL 5, 1924 Untiring efforts for seven days on the part of scores of volunteer workmen and railroad employees so far have failed to bring to light the body of Don Allred, Killed in the snowslide at the Bridle Veil Falls in Provo Canyon last Saturday morning. It appears possible that Allred’s body will be recovered either today or tomorrow as the work has resulted in much of Saturdays slide being removed through blasting, hydraulic action and the increased flow of the Provo River.

SALT LAKE TRIBUNE SUNDAY APRIL 6, 1924. Second victim of slide found. Body of Don Allred, who lost his life in canyon disaster, finally located. April 5th at 10:10 o’clock this morning the body of Don Allred one of the victims of the Bridle Veil Falls snowslide was found by workman after an incessant effort of seven days.

The body of Allred was found on the Southeast end of the slide. The head and upper body were crushed probably from a tree on which the body was found lying. Twenty feet of snow covered the body and it appears probable that Allred was caught in one of the holes in the previous snow slide to that in which he lost his life.

Upon being taken to the Hatch Funeral Home it was ascertained that the head, left arm, shoulder and chest had been crushed, practically every bone having been broken. Death was undoubtedly instantaneous. With great care it was uncovered. It was immediately brought to Provo in charge of an only brother Edward Allred of Spring City and a half-brother Bert Allred also of Spring City. Allred is survived by his wife, Mrs. Pearl Madsen Allred, his mother Mrs. Annie E. Allred of Spring City, one brother Edward Allred, Spring City, Three half-brothers Eugene, Myron and Bert Allred and two half-sisters Mrs. Nina Mickle and Mrs. Mary Ellen Acord.

The body will be taken to Spring City tomorrow morning at 10 o’clock where funeral services and internment will take place.