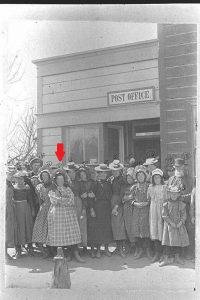 Clarissa was the fifth child born to James Tillman Sanford Allred and Christena B. Anderson Allred. She was born in Spring City, Sanpete County, Utah on September 17, 1884. She lived in Spring City until she was eighteen when she met and married Albert Marshel Brown on March 4, 1903 in Manti.

After their marriage they lived in many towns and cities. I do not remember all of them but some would be Castle Gate, Helper, Price, Scofield, Aurora, Salina, Salt Lake City, and Cedar City, Utah. They moved around a great deal because of dad’s work as a carpenter. They went where work could be found. Some out of state cities where they lived were Pasadena, California, Ruth, Ely, and Macgill, Nevada, Evanston, Wyoming and Pocatello, Idaho.

Clarissa was a loving mother to four children; three of which are still living. Claude is in Brush Prairie, Washington, Iyone is in a rest home in Centerville, Utah and I live in Salt Lake City, Utah.

One of the fun recollections of my mother was at a Halloween party at my Aunt May’s. Mom was dressed in my dad’s clothes and she didn’t want anyone to know who she was. She told me not to call her mom while she was at the party, but accidently the first words out of my mouth was “mama” She had to go home and change her costume again so the others would not know who she was.

Later in life my mother became much in demand as a live-in nanny or I should say grandma to several well to do families. She loved to help raise children and teach them to love the Lord. She also lived and shared a home with her daughter and grandchildren and enjoyed their company.

She was a member of the Richards Ward Relief Society for many years.

Clarissa loved her sisters and brothers and they loved her, their’s was a very close family who spent as much time as they could together, even in later years. Her heritage was important to her.

Clarissa made a nice home wherever her family went and she was a good seamstress and a good quilter.

The first recollection that I have of Grandma was when I was a small boy (age 4 or 5). I went with my family (father, mother, etc.) To visit her in Spring City, Utah. Behind or by the side of the home that she lived in was an apple tree. Most of the apples had been picked, but Grandma said we could have what was left. My brother Pat Austin and cousin Jerry Dunton and I then climbed the tree and ate as many apples as we could. This resulted in all of us getting quite sick. My father was really mad and was going to lick us; but Grandma stood between him and us and told him if he did, then she would in turn come after him with the same stick. This was not the last time I stood behind her comforting and protecting skirts.

She always seemed to have fresh cookies to eat or almost finished baking. Later when I was ten my father died and we moved from McGill, Nevada to Salt Lake. We lived with Grandma and Grandpa Brown at the Pierpont Apartment where they were managers. Soon after we all moved to a house at 1820 Lincoln Street in Sugarhouse. This was the home which my mother purchased after dad’s death. It is where Grandma and Grandpa Brown lived the rest of their lives. Grandpa converted the old home into a duplex with part for he and Grandma and the other part for my mother and kids.

From the age of ten I grew to adulthood with her there as a presence of love, concern and interest. She was always interested in what was going on in my life and was a source of counsel, guidance, inspiration and love, as well as an example in my making decisions which determined that path I took in my life. She had a strong testimony of our Savior and the Prophet Joseph Smith. I didn’t realize until I was well into my adult years, how hard her life had been.

I know she appreciated her home on Lincoln St. because she constantly mentioned how nice her living conditions were. Our home had a good sized garden she would work in; she loved to garden. (It wasn’t my favorite activity). I missed more than one or two baseball games because my gardening chores were not completed.

She had strong beliefs in education and constantly improving. She was always a reminder to me of doing the best one could and the value of hard work. Grandma Brown was and is a profound influence on my life. She was the daughter of a pioneer and she carried that pioneer spirit with her throughout her life. I was fortunate to be part of her life and to have known her.