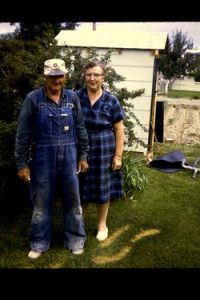 Chasty Allred was born on September 10, 1899, to Edward and Alvrean Lemmon Allred in Springdale, Utah. She was the middle child of nine children.

Chasty attended school in Lovell, Wyoming, graduating from the eighth grade. When it was time to go to high school, Grandma Allred thought that it was too far for Chasty to go to Cowley to school, so she went to the eighth grade for a second time. She always said, "You know what I did. I played the whole year! 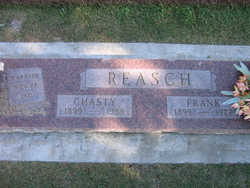 Chasty attended the Big Horn Academy in Cowley for two years. She roomed there one year and went by horse and buggy the other year. She said, "I was foolish enough to think I knew it all and quit school." Her education did not end there, but she continued to read and learn. She especially enjoyed reading the scriptures.

After quitting school, she went to work at the Lovell Laundry. She loved having some money of her own and being able to share quarters with her youngest sister, Veda. This tradition carried over for a lifetime. She would send quarters to Veda in letters she wrote.

While she was working at the laundry, she met Frank Reasch, who was a hard-working young man. He came to America when he was three years old. He was born in Rastadt, Russia, to German parents. They were married in Basin, Wyoming, on November 23, 1921. They were married almost 36 years when they were sealed in the Idaho Falls Temple, June 11, 1957.

Frank and Chasty had five children, Jennie, Frank, Phil, Rex and Jerry. Because of the death of Jennie and later their son-in-law, they raised their granddaughter Sheraldean Salman. I think that it was because of our mutual loss that we needed each other so much.

Frank and Chasty taught their children through example to be honest and to do a day's work for a day's pay. "I remember Grandma telling me that Henry Keil, the owner of Keil's Grocery, said there were two men that he would trust with anything, their word was their bond. One of them was Ed Allred. When I heard this story I knew this was my legacy, and I, too, must be honest and keep my word."

The most important things in Chasty's life were her faith in God, her family and helping others. She especially loved her missionaries, her own grandsons and those serving in Lovell. She fed the missionaries many times, and hoped, in turn, that others were feeding her grandsons who were serving missions.

Chasty had a great talent for visiting others and seeing their needs and was always willing to help them. She was so very considerate of all who knew her.