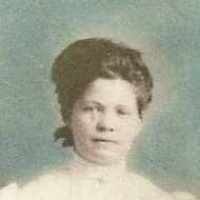 Catherine Cedena Allred Cloward was the seventh of eight children born to James Tillman Allred Jr. and Christena B. Anderson Allred. She was born July 7, 1890 in Spring City, Sanpete County, Utah. She was reared by good Mormon parents. She was a faithful and dutiful daughter.

Cedena was an A one student. She obtained her scholastic training at the common school in Spring City. Her teachers were John S. Blain and James W. Anderson. After completing her schooling, she lived at the home of James W. Anderson during his wife’s illness. Then she was employed by Bishop Louritz O. Larsen as a clerk in his store for two years. She then went to Price, Utah as clerk in the Lowenstein’s Merc. Company for seven years. She also worked in Lyman, Wyoming as a clerk.

She took an active part in the different church auxiliary organizations while she lived in Spring City. She was first counselor in the stake Young Women Mutual Improvement Association with Lena Bunnel. She loved to work with young people and always looked for their good qualities. She felt like youth should be given opportunities and responsibility and more occasion to participate in drama, literature, music, sports, and social activities.

Cedena was favored with a beautiful voice and enjoyed singing and dancing. She was always very industrious and sympatric. Through all the years she was constantly urging her brother and sisters to attain high achievements. She was a great reader but never cluttered her mind with shoddy literature. She chose to be the kind of person to reach out willing to help a relative, friend, or neighbor in need. She was humble, submissive, gentle and full of patience, long suffering in her trials without complaining.

She maintained her health by being clean, neat and wearing appropriate clothing; she also used wisdom in not over taxing her body. She was grateful for the gifts and talents she possessed. She had the ability to do things which required effort, practice and experience. She was fearless in defending that which she felt was right. She was kind, charitable, and unselfish. She appeared as she really was, genuine and sincere.

At the age of 33 she married Marion Cloward on December 19, 1923 in Salt Lake City. They made their home in Aurora, Utah. Marion was previously married and had two children, Erma age 6 and Cleve was 10 years old. She was a real mother to them and made a comfortable home, and as all women are by nature, sensitive and dainty admiring beautiful things; she enjoyed decorating their home. She was a good cook and seamstress.

Cedena again became active in the church as a leader in the M.I.A., secretary in the Relief Society and a ward choir member.

She applied as town postmistress and passed the examination. She held that position for seventeen years and was considered one of the best in that district. Due to illness she was released.

Cedena was dearly loved by her relatives, friends and neighbors, especially by her nieces and nephews. She had no children of her own.

Family history, “From Allred to Allred” put together by Venna Severance