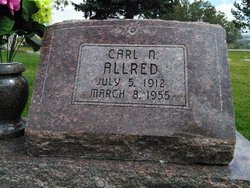 Carl Niels Allred was born on a hot summer day, July 5, 1912, at Moab, Utah in Grand County. He was the third son and fifth child of Mary Laura Johnson and Wilson Allred. His early childhood was spent in Moab and in 1917 his father bought some farm land in and around Monticello in San Juan County and the family moved there when Carl was around 5 or 6 years old. He was watching his father and some others "scalding" pigs after they had been killed, and he fell in the bon-fire hands first. His mother wrapped his hands that were badly burned and his little finger on his right hand grew crooked and close to his hand where it had been wrapped. It was that way all his life and he never had the use of this little finger.

Carl lacked 1/2" of reaching 6 foot when he was fully grown. He had a stocky build and weighed over 200 lbs. His eyes were dark brown, from his mother’s side of the family. He had very dark brown, wavy hair. He had a build like a football player. He had broad shoulders and a stocky build all his life. His hands and feet were wide and thick. He wore a 10 ½ EE Shoe and his ring size was 11 or 11 1/2.

Carl Niels was his full name. His mother wanted him to be named Carl and his dad wanted Niels. His dad always called him Niels. He was always particular about how his name was spelled. Always with a "C" and not a "K".

During high school he started his great love for basketball. He would hand around after school was out and he soon became good friends with the janitor. He made a deal with him. If Carl would sweep the floors, he would let him play ball in the gym. Carl loved all kinds of sports and he had his arm broken three times when he was young.

His nickname was Curly and he disliked it very much. Carl’s baptism was an unusual one. He was to be baptized in a farmers pond, June Pehrson’s, 2 miles South of Monticello. When the group arrived at the baptism place is was discovered that they had forgotten to bring the white clothes. Carl’s mother sent Julia, Carl’s Aunt, back to town to get them. It seemed to Carl it was taking an extra long time for Julia to get back, so he talked them into letting him get baptized in his birthday suit.

On August 25, 1934, Carl married Maxine Baily in Monticello by Maxine’s uncle, George Barton. Right after the ceremony they left in the U.S. Mail truck Carl was driving from Monticello to Thompson, Utah where it was put on the train. They spent their first night in Thompson.

Carl worked in Blanding, Moab, Provo, and Rock Springs WY during 1935-1945. He always came back to Monticello and in 1945 he started his job as foreman at the Uranium Mill in Monticello and lived and worked there the rest of his life.

On the 8th of March 1955 Carl was on his way home from a basketball game in Cortez, CO when he ran into a cement bridge and was killed instantly.