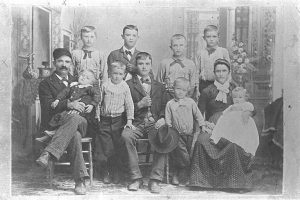 The following stories were recorded and written by my great-grandfather, Asa Newton Allred. He was the son of Maria Josephine Stock and Medwin Newton Allred, the 5th son of William Moore Allred. Asa was born 5 Aug. 1879, at Garden City, Rich, Utah. He married Polly Uretta Richardson on July 5, 1905, in the Logan Temple. From the ten typed-written pages of his, "My Many Personal Testimonies" I have chosen a few stories that I thought would be interesting and informative for the Allreds of America:

"About 1907, when my patriarchal blessing was given, it said, 'Satan has tried to destroy you and will continue to do so.' Down through the years, my experiences have proven the truth of that statement, as the following will show:

"When I was about one year old, my father was cleaning his rifle at the back door of our home in Garden City, Utah. I was crawling around the well curb and peeking at him. He took sight on me and started to pull the trigger and then thought of what a fool trick it would be, even though he was sure the gun wasn't loaded. He raised it above my head about a foot and shot, the bullet missed me only by inches. Father said it almost drove him wild for months.

"When I was about three years old, I took very sick. My father was sitting by my bed when my older brother came running into the house and said, 'Pa, there is a man coming down the sidewalk with only one leg!' A moment later a guy stepped into the doorway and said, 'I understand you have a very sick lad. I'd like to administer to him.' father said, 'We have Elders who do that work, we never call on strangers.' As he turned to go, his whole back was gone! It has been said many times that if Satan appears, there will always be some part of his body missing. The people for a time had been bothered with evil spirits in that locality and Father said he was sure that if he had permitted that man to touch me, he would have entered my body.

"About 1889 Father sold out and moved the family to Provo Bench where we lived for more than four years. I was returning home from Sunday night meeting, riding my saddle pony and it was dark and rainy and as I passed a neighbor's house a heavy flash of lightning struck. I heard a girl scream and then I went blank. I don't know how long it was before I came to my senses enough to know that my pony was stumbling around on a lot of rocks which had been duped alongside the road and I was sitting in the addle with my face down and both arms around the saddle horn. Then I went blank again and never knew a thing until 11:00 a.m. the next day. Mother said she was lying in bed wondering where I was when she heard the chains on my bridle rattling on the gate. She came out and said I was still in that same position and the pony stood with his head over the gate. The girl that I heard scream was the girl my older brother was going with the lightening had struck her just as she came out of the door. It knocked her against the house and she was in bed for over a week afterwards.

"Father moved his family to Star Valley, Wyoming in November of 1894. We built a new log home one-half mile east of Fairview. Father passed away in July of 1895, leaving Mother with nine children, the youngest being 18 months old. One time, a neighbor was driving a wild cow and she ran down around our corral. I had a large pile of wood piled just outside the garden fence. The even end was even with the gate. I thought I could help him get her away from the yard. I was right at the gate when she came around the woodpile. The second she saw me, she dived at me like she would a dog. She wasn't 20 feet from me. I had a hammer in my right hand and as she dived at me I jumped to the left and came down with that hammer, caught her right behind the horns and killed her dead. She didn't miss me but 3 inches with those sharp horns. The neighbor told me to get him a butcher knife. I did and he cut her throat, dressed her, and gave me one-fourth of that four-legged-devil for killing her!

"In 1897, two years after Father passed away, I drove Mother and the eight boys to Stake Conference. It was the first time I ever remember seeing Elder B.H. Roberts. He was the new one of the 7 Presidents of the Seventies' Quorum. As he started his address, he said, 'On a bright sunny morning, there appeared a dark cloud. It began to spread so rapidly that within a few hours time the whole canopy was dark. Then a flash of lightning, a rumbling and rolling and then a downpour of rain.' speaking to the 70's he said, 'Now if the heavens can't put on a demonstration without preparation, what can you do?' I've never heard a statement that seemed to go through me like that one did. On our way home I said to Mother, 'If I am ever called on a mission, I want that man to set me apart.'

"Three years later I got a call from Pres. Lorenzo Snow to go on a mission to the southern states and to appear at General Conference at Salt Lake in April of 1900. As we met in council meeting, there were 23 elders to be set apart. There being so many, the 7 Presidents decided to separate to save time. Twelve of the elders left for one room and I was left with the 11 and to my sorrow, B.H. Roberts went with the twelve, although I had prayed for the privilege of B.H. Roberts setting me apart. The three presidents started setting the elders apart at the opposite end of the bench from where I sat. Just as they said 'amen' on the 10th one, there came a tap, tap on the door and in walked the other four Presidents. All seven of them laid their hands on my head and B.H. Roberts set me apart! If ever there was a prayer answered, that one was. As he spoke, he said, 'You will be hated and despised. You will be threatened of being whipped and mobbed. But if you will honor the Priesthood, obey the council over you, you will go in peace and return in safety. You will even be shot at. You have been given the gift of healing, even the dead will live through administration under your hands.' After this we were on our way.

"We went to Chattanooga, Tenn. And my first companion was Ed Budge, son of the president of the Bear Lake Stake--a very fine young man about my age. We went to our field of labor. The first meeting we held was in a little old log school house in Macon Co., Tenn. There were about a half dozen people present. All the light we had was three oil lamps, a round wick about the size of your thumb--no chimney. Ed was talking. I sat with my back to a bog hole in the wall for a window, with a plank nailed across the space. All of a sudden people began throwing rocks on the house--hundreds of them. One large rock about the size of your fist struck the plank behind me, knocked it off and it fell across my shoulders. The rock rolled in by my feet. The people put out the lights and told a young man to take us down through the timber and around to the house where we were staying. As we left there were three or four shots fired. I thought then that my promises were being fulfilled very suddenly.

"While in Putnam County, we came insight of a large sawmill. We could see 25 to 30 men at work. As we drew nearer, we noticed the men disappearing. By the time we got to the mill, there was not a man in sight. I wanted to look the mill over a bit, but all of a sudden there came a shotgun blast and the shot hit on all sides of us. We took the hint! We were not wanted, so started on when another blast came with the same results. How in the world that shot could light on all sides of us and not one pellet hit either of us or our cases, we could never understand. But that was the promise.

"The first holidays of 1900 we got a letter from the president, telling us to find a friend where we could stay the whole Christmas week and not get out at all. It was bootlegging time and so much drinking. We had a fine friend who had asked us to come any time--H.A. Dreman. He was one of the best friends anyone ever had, but his wife was a devil. She was a minister's daughter. She was never in the same room we were at the same time the whole week that we were there.

"We three were sitting on the south porch on Christmas day. Two of the little girls were playing in a big white topped buggy and the smaller one fell out, over the front endgate. I saw her fall. She lit on her forehead and her body laid flat on its back so her face lay in the dirt and the back of her head square between her shoulders. It was about two rods from us. I ran and picked her up. I had to go through a gate, that, of course, slowed me down some. I laid her on her father's lap, ran around the house into our bedroom, got the consecrated oil that was in my suitcase, ran back, and handed it to the Elder to anoint her. The father said, 'Wait a moment,' then said to his wife as she stood three or four rods away, 'You have always fought these men, now I want you to remember and watch!'

"Elder Sowards anointed her and then I sealed the anointing and just the second I said 'Amen' the little girl took a long breath. He said, 'That's the first breath that she has taken since you laid her on my lap. If ever I am sick, I'll have the Elders, even if I have to send to Salt Lake and pay their expenses both ways.!'"

Asa Newton Allred died in Salt Lake City, Utah, on Dec 16, 1968. He was one of the kindest, most faithful men I ever knew.