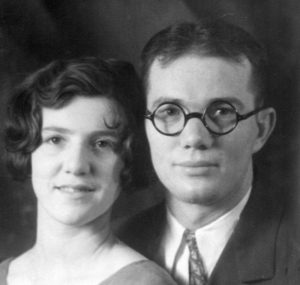 We who are the earthly family of Angus Lemmon Allred can best explain what comprised the essence of this man we called our father in one word... "love". He tried to love everyone and harbor no ill feeling toward anyone. He loved his family unequivocally and tried to teach them to appreciate the finer things of live. Early in his life he determined through study and prayer that he wanted to live a Christlike life and love his fellow men as Christ had. We believe he successfully dedicated himself to this effort. We knew him as a deeply spiritual man with a sensitive nature. His example was his greatest legacy to us.

Angus was the fourth son and eighth child in a family of eleven; including his mother, Alvrean Rebecca Lemmon and father, Edward Warren Allred. He was born May 5, 1908.  He lived nearly half of his life in the town where he was born, Lovell, Wyoming and then moved his family to Salt Lake City, Utah in the forties. He died on November 27, 1979.

Angus was born into a strong family/farming culture, and naturally developed a strong work ethic. This training would serve him well for the rest of his life. He had gifts that were to take him away from the farm, but he always loved working the soil and growing things. He was an expert gardener in his own right and always took great pride in his yard and home. His mother often spoke of Angus's love for nature and how it was he who first found the blades of grass and green leaves which appeared earliest in the spring.

He appreciated good music and learned to play the piano, the organ, trumpet, baritone horn, guitar, mandolin, and the trombone. He was a self-trained vocalist with a strong bass voice and sang in quartets and choirs all his life. He was known for his skill in directing church choir presentations.

In September of 1928 he met a lovely young lady from Salt Lake City who was going to school and staying with her sister Harriet Parry Johnson. Her name was Elen Rebecca Parry. She was a beautiful girl with long dark hair and sparkly brown eyes. In January of 1929 they first began going out together and eventually fell in love and were married April 3, 1930 in the Salt Lake temple. In this lifetime they became completely devoted to one another.

Four children were born to this happy union, Bruce, Wallace, Lora, Edward Parry and later Tom joined the family.  In an effort to provide the widest range of opportunities for their children, they made a decision to move to Utah to be closer to colleges and schools where they could get a better education and be near a temple.  Angus would say in later years, "Sometimes in our search for green pastures we stray out of 'our' greenest one."

It wasn't until years later and after many job changes and personal struggles that Angus finally received his teaching degree from the University of Utah and began doing the one thing he was best qualified for...teaching young children. He taught special education until his health failed in 1969.

God has closed the door on the earthly life of Angus Lemmon Allred and opened another one for those of us who have followed after him. His wholesome character and integrity live on to bless and sustain all of us who are his family. --- written by Wallace P. Allred, his son.