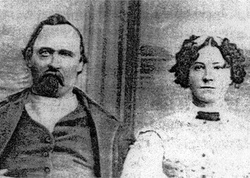 Andrew Jackson Allred was born 12 Feb 1831 in Monroe Co., Missouri. He was the eighth son and the twelfth child of James Allred and Elizabeth Warren. His father was born in Randolph 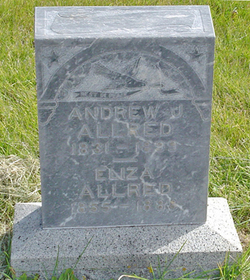 Co., North Carolina on 22 Jan 1784 to William Allred and Elizabeth Thrasher. His mother was born in South Carolina on the 6th day of May 1787 to Thomas Warren and Hannah Cothen. His parents were married the 14th day of Nov 1803, Randolph Co., North Carolina. Shortly thereafter they moved to Franklin Co., Georgia where their first son, William Hackley was born. Before 1806, James, Elizabeth with their son moved to Warren Co., Kentucky, where their second son, Martin Carrel was born. A short time after this the family moved to Ohio near Yellow Banks where their third child and first daughter, Hannah Caroline was born. Sally was also born in North Carolina. Isaac was born in Decatur, Iowa. The family then moved to Bedford Co., Tennessee, where they remained for sixteen years and had six more children born to this marriage.

In the year 1830 James Allred moved with his family to Ralls County, Missouri, which was later divided and the family found themselves in Monroe County where Andrew Jackson, their last child was born.

Through the teachings of George M. Hinkle and others, Andrew Jackson's father and a number of his family joined the church on 10 Sep 1832. The branch where they were living was known as the Salt River Branch. Andrew Jackson wasn't baptized until 1839, and later endowed 3 Nov 1855. James, his father, was captain in Zion's camp. He went with the prophet Joseph Smith, his brother Isaac, his son Martin in June of 1834 to redeem Zion.

In the spring of 1835 the family moved to Clay County, Missouri. Again in 1837, after a stay of only two years the family moved to Caldwell County, where James, Andrews father, was elected County judge. When the Church left Missouri in the spring of 1839 the family moved to Pittsfield, Pike County, Illinois. They did not stay there long however as in the fall they to Commerce afterwards called Nauvoo, where their father was ordained a High Priest and a member of the High Council. He was also present on Saturday May 24, 1845, when the Twelve Apostles and the High Council, of which he was a member, assembled to lay the capstone of the completion of the Temple. He was also one of the body guards to the Prophet in the Nauvoo Legion.

In 1840, Andrews father was kidnapped. The circumstances surrounding his kidnapping are as follows: The Saints at Nauvoo, by June of 1840 had erected about 250 homes. They were mostly block houses, but there were also frame dwellings. Many more houses were in the process of erection and the town was rapidly increasing in population and about 1,000 acres had been laid out for lots. When the people of Missouri, watching the Saints re-establishing themselves, realized that persecution and expulsion had been fruitless in destroying the church, and the group as a whole, they began to conceive ways of utterly destroying the Mormon people. In one of their fiendish attempts to abolish the Mormons, a small group consisting of H. M Woodward and six other men crossed over the Mississippi River into Illinois at a point above Quincy and kidnapped James Allred, and three other Mormons, and without writ or warrant dragged them over to Missouri to a neighborhood called Tully in Lewis County. These unfortunate men were imprisoned for a day or two in an old log cabin, during which time their lives were continually threatened. One of James's companions, Alanson Brown, was taken out and a rope was placed around his neck. He was then hung up to a tree until he nearly strangled to death. Benjamin Boyce at the time was stripped of every particle of his clothing and tied up to a tree for the greater part of a night and threatened frequently. He was finally released without being whipped. On the 12th of July 1840, after being prisoners for two days, they were released with this statement: "The people of the Tally having taken up Mr. Allred, with some others, and having examined into the offences committed, find nothing to justify his detention longer and have released him.  Signed By order of the Committee, H. M. Woodward.  Even the non-Mormons were vociferous in their condemnation of this type of treatment, and petitioned Governor Carlin for action to stop them. Nothing ever came of these petitions.

Andrew's father not only assisted in building the Nauvoo Temple, but assisted in giving endowments therein.

In June 1844, the Prophet Joseph, Hyrum, President John Taylor, and Apostle Willard Richards were taken to the Carthage Jail in Hancock County, Illinois. At the jail the Prophet handed his sword to James Allred and told him he might need it to defend himself. On June 27 the Prophet and Hyrum were murdered in Carthage Jail. The wounds of President Taylor were cared for Apostle Richards and he was made as comfortable as possible until the morning of July 2nd. Early on the morning of the 2nd of July, they placed him in a wagon then to a sleigh placed behind James' wagon and a mattress was placed there on. By cutting through and taking down fences, they soon covered the eighteen miles to President Taylor's home. As news of their approached the city, thousands came out to greet them and President Taylor exclaimed upon arrival that he felt better than when he started.

On February 7, 1846, three of Andrew Jackson's brothers, one being James Tillman Sanford started west on May 20th, James followed with three brothers, meeting at Pisgah. Andrew came with his parents, as he was only 15 years of age. When they reached Council Bluffs, James enlisted in the Mormon Battalion in Company A. They went to Santa Fe, from which place he and others returned to Pueblo and service; and in 1847, again started west under Captain James Brown, reaching Salt Lake City July 29th, where he was discharged. He went to making adobes but was called to help settle Sanpete County.

On March 22, 1852, Andrew Jackson, in the company of his parents, and many other members of the Allred family and their families, started their hard, treacherous journey to Spring City. This company consisted of James Tillman Sanford, his wife and two children, James Allred and wife Elizabeth and son Andrew Jackson, three children and Charles Whitlock, George M. Allred and James Franklyn Allred, with an Indian boy and girl he had bought from the Utes. Others came in the fall. They were the first be on the ground of Spring City. On July 29, 1853, they lost all their stock and had to return to Manti on account of Indians. In October they returned to Spring City but had to leave again December 17th. In 1855 they went to Ephraim and helped build the fort to help protect from the Indians. Spring City was organized into an L.D.S. Ward in January 1860 with Christen G. Larson as Bishop. When they first went to settle Spring City they had a lot of trouble with the Indians causing them to move back and forth for their own protection.

Andrew Jackson spent most of his life from the time of a young boy with the Indians. He even wore buckskin trousers, ate like the Indians and spoke their language very fluently. His father was called to settle among the Indians and they went long periods of time without even seeing any other white people other than themselves. His parents adopted an Indian girl and raised her to womanhood when she married and raised a family of her own.

Andrew Jackson and his brother, James Tillman Sanford Allred, were interpreters selected and appointed by President Young to settle disputes among the settlers and Indians and to establish friendly relations. James Tillman being called "Showritz" and Andrew Jackson was known as "Shungitz". The Indians were unusually friendly to these brothers and often made visits to their home.

At the age of 23, Andrew Jackson married Chloe Stevens who was born 18 Jun 1838 to Henry Barnabus Stevens and Mary Ann Howe. She had been baptized a member of the church and was endowed 3 Nov 1855 and sealed to her husband Andrew the same date. They were married the 13 August 1854. There were seven children born of this union and all were born in Spring City, Sanpete County, Utah.

Chloe Stevens lived to be 34 years of age and died 22 Oct 1872 at Spring City, Sanpete, Utah. On July 1873 Andrew Jackson married his second wife Elizabeth Ivy who was born abt 1846 at Council Bluffs, Iowa, to Thomas Kelton Ivy or Ivie and Amanda Jane Moore. She was baptized 8 June 1961, endowed 15 January 1962, and sealed to Andrew Jackson 29 May 1963. To this union two children were born, being as follows:

Andrew Jackson then married his third wife who was a widow and went by the name of MaRana. Her given name was Martina Neilson Anderson and was born abt 1830 in Fremont, Wayne, Utah. They also had two children born of their marriage, being as follows; both born at Fremont.

This history was compiled from many different sources as listed below: