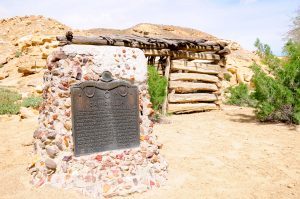 HISTORY OF ALLRED POINT
APPLICATION FOR MARKER TO BE ERECTED AT SAND POINT
APPLIED BY CAMP GEYSER, FREMONT, UTAH

April 19, 1876, Andrew Jackson Allred and family, his nephew Wilson Monroe Allred and wife and Hackley Allred (who had no wife), arrived from Spring City in what was then known as “Rabbit Valley”. They were accompanied by W.W. Morrell, Wm. Maxfield and Henry Maxfield who had attempted to go to Castle Valley in Emery County and could not get through because of snow. These men all eventually established a residence and took up claims on quarter sections of land in what later became known as Wayne County.

Andrew J. Allred built his home on the east side of the Fremont River and there on October 24, 1876, his wife, Elizabeth Ivy gave birth to a son, Francis Marion Allred, the first white child born in the valley.

The winter of 1876 proved very cold and the river froze over, flooding much of the valley and forcing the Allred’s to move due west to the point of the hill, which even today (1961) is yet called “Jack’s or Allred’s Point”.

The house with some additional cabins adjoining it not only was the forerunner of today’s modern motels, but became the first store or trading post and the first post office.

Merchandise in the store consisted of a few bolts of calico, homemade shoes, nails. Ammunition and fish were kept salted in a barrel for the convenience of those who didn’t want to catch their own from the nearby Spring Creek or the river. The most frequent customers were the Indians who traded with some little money, but mostly with buckskins and furs. The terminus of the railroad was at Juab and goods were shipped in via wagon from there.

September 25, 1879 Andrew J. Allred was appointed Valley Postmaster, a position he held until December 2, 1886. People came from all over the valley for their mail and to trade at the Post. The mail came three times a week and was packed by way of horseback. Over a year previous to Allred’s appointment the valley people took turns going to Burrville for their mail.

Andrew J. Allred along with John T. Lazenby and Geo. W. Stringham were the first school trustees for Fremont Valley, which then comprised all of what is now Wayne County.

Half a mile south of this historic site is another, the site where the first burr grist mill in the valley was located. The people commenced by throwing a dam across Spring Creek, just north of the Allred Point, backing up the water about 3 or 10 feet, just enough to turn the water into the canal. In turning around the Point with the canal they encountered a solid ledge of rock and had to build a flume. From here it continued a half mile south to the mill sight, where John W. Young had built a house of logs, with several rooms, which he and his family moved into while building the mill, which was financed and owned by Isaac Riddle.

The mill was built of logs, uprights and lined with lumber, a two story building. The burr mill consisted of two large stones, the lower burr was a little bit oval, about 2 ½ feet in diameter, while the upper one cupped over the lower and had a hole in the top. The lower one was stationary and the top turned while the grain ran into a hopper and was then taken into sifts, fed through the hole in the top, bran and shorts and flour was separated.

Location of the first Fremont Town Cemetery, and all the old timers say there were four original graves, today there remains just the one containing the body of Silas Warren Morrell, born December 13, 1880. He fell into the sawmill pond near the present site of Mills Meadow and was drowned October 28, 1884. His lonely grave has kept a silent vigil over this valley and witnessed many changes during these 80 years.

NOTE: Camp Geyser, Daughters of Utah Pioneers of Fremont, Utah made an application for a marker to be placed at the Allred Point to commemorate this historic site, which still has a few of the black current bushes, plum trees, and an old apple tree planted by the original owner.

On the first Monday in May 1961 after first getting the consent of Glade Taylor, executor of the L.J. Taylor estate, daughters, VaNeil Taylor, Captain, Bell Taylor Vice Captain, (A granddaughter of Andrew J Allred) and class leader Retta B. Tanner met with Wayne County commissioners, Vance Taylor, Chairman; Carlyle Baker and Worth Sorenson and told them of their desire to place an application for a marker and to make this a spot that would be beautiful to the eye as well as historically commemorative, since Spring Creek flows through the site and there and thee are many outside as well as local visitors to see it.

They agreed to help us all they could and have gone to the extent of fencing an acre of land, cutting down old dead trees, leveling land and making a parking area, planning next year to use some of their funds to build a pit to hold campfires, etc. The Fremont Daughters have agreed to help keep rubbish and litter cleaned up and are holding their Pioneer Day celebration at this site.

Several prominent people offered rock for the monument to be constructed. 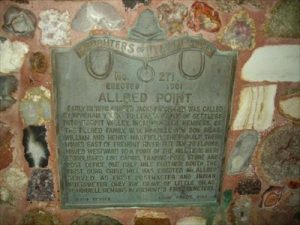 Daughters of Utah Pioneers
No. 271
Erected 1961
Allred PointEarly in 1876 Andrew Jackson Allred was called by Brigham Young to lead a group of settlers into Rabbit Valley, including ten members of the Allred family, W.W. Morrel and son Silas, William and Henry Maxfield. They built their homes east of Fremont River but due to floods, moved westward to a point of the hill. Here were established log cabins, trading post, store and post office. One half mile further south the first burr grist mill was erected. Mr. Allred served as first postmaster and Indian interpreter. Only the grave of little Silas W. Morrell remains in Fremont's first cemetery.

History was compiled by Retta B. Tanner, with contributions from the following: Wm. C. Jenson of Fremont who lived near Allred Point as a boy and also Dan Brian, these men were kind enough to relate much interesting data and Mr. Brian and his wife let us have access to the history of Wayne County and notes of their son, Donald Fount Brian who wrote the history as requirements for a thesis while a student at Utah State Agricultural College in Logan and contained descriptions from many of our Pioneers not now living including Dan Allred son of Andrew J. Allred. He died May 1935. Also records of Wayne County and from National Archives and Records Service, Washington D.C.