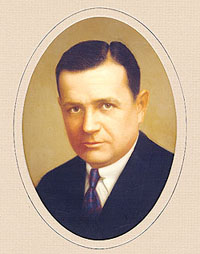 Beginning in 1961 and up to the present time, the writer has sent to many persons and places a copy of the booklet “Allred 1553-1961" which booklet was dedicated to my brother, James V. Allrred, 1899-1959, former Attorney General, Governor and United States District Judge in Texas. 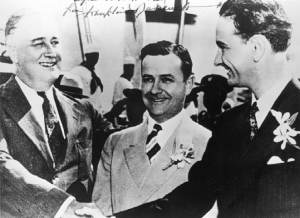 Since the program prepared by the Committee for this dedication contained many of the Achievements of my brother, the thought occurred to me that you might like to have a copy, and the writer is sending one to you with this letter. 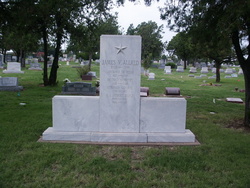 A man equal to the burdens of a troubled era in Texas was James V. Allred, who was first elected governor in the crime-plagued and Depression-sad year of 1934. He served from January 15, 1935, until January 15, 1939, and was leader in the political moves that brought about better times.

James V. Allred was born in Bowie, Texas, March 29, 1899. He was one of nine children born of Renne and Mary Henson Allred. From childhood in a strictly-disciplined home, among his many brothers and sisters, he very early learned how to practice tolerance; and what he learned in that home about social adjustment and equity stood him in good stead throughout his career as a statesman. He learned to work, to persist, to act on positive belief that whatever he wished to attain was within the scope of possibility.

His father was the first rural mail carrier in Montague County, and Jimmie and his brothers served as substitutes. As a boy, Jimmie Allred also worked as a soda pop bottler, a shoeshine boy, and a newsboy, besides carrying out duties at home. The mother in the home was a highly intelligent, good and positive person; her children followed her wishes that they master practical skills, including the basic tools of business life--shorthand, bookkeeping, business arithmetic. All the sons to reach adulthood became court reporters or law clerks; the daughters were competent secretaries. (After her children were educated, Mrs. Allred also graduated from commercial college, and the college president pronounced her the family’s best student; she later was a partner of her husband in the real estate business)

Jimmie Allred finished high school and business college, and entered Rice Institute, where free tuition was provided for the bright youth of Texas; but free tuition is not quite enough to keep a good mind functioning in a healthy body, and as a late teenager with a good appetite, this youth had to drop out. He went to work for the U.S. Bureau of Immigration, and then in 1917 entered the United States Navy and served in World War I.

After the war, he studied law at Cumberland University, in Tennessee, and was admitted to the bar in Texas in 1921. He soon joined the Wichita Falls firm of Bernard Martin and Ben G. Oneal. (Mr. Oneal was later a State Senator.) Mr Martin in 1922 became District Attorney, and boyish Jimmie Allred was Assistant District Attorney. Then in 1923 Governor Pat M. Neff appointed Jimmie Allred-- still under 25--to the post of District Attorney, 30th Judicial District of Texas. His star of political destiny had risen.

For his forthright opposition to the Ku Klux Klan, resurrected in the frustrations of war’s aftermath, Allred won distinction as “the fighting district attorney.” Adversaries fought back, and when he aspired to state office (as Attorney General) in 1926 he met with considerable opposition. Some questions raised as to his qualifications were frivolous. As to his being a West Texan, too young for state office, and a bachelor, he was wont to reply that his birth occurred in West Texas because that was where his mother was at the time of his birth; he was growing older; and he was working to end his bachelorhood. Nevertheless he was defeated.

In 1927 he married Joe Betsy Miller, granddaughter of an old-time district attorney in Hamilton, Texas, and daughter of Wichita Falls councilman Claude Miller, who for an interval had lived across the Red River and had been a delegate to the Oklahoma statehood convention in 1906-1907.

In 1930, Jimmie Allred won the office of Attorney General of Texas. He took office in an era marked by bank failures, economic depression, and crimes of desperation. The fabulous East Texas oil field--largest in the world--was being opened with exciting discovery wells of great value. This sudden wealth gave the state some economic advantage, but it also attracted criminal elements against which Attorney General Allred had to fight, in order to defend Texas’ good name.

During four years as Attorney General he made a record fight also against business monopoly and against efforts of corporations to influence state taxation and fiscal policies. He was able to put “teeth” into the gasoline tax law that previously had been rather summarily evaded. He went into court and defended oil proration laws--winning the very first test case. He established for the state school fund its title to West Texas oil royalties worth over $20,000,000.00, and successfully fought the federal government’s attempts to tax the income of Texas schools.

His record as Attorney General helped him win the office of Governor in 1934, and also the distinction of being given the title “Outstanding Young Man in America” by the national Jaycees in 1935. Having taken the helm in Texas government when a severe economic depression was blighting the world, he found ample opportunity to exercise his zeal for reform and reorganiation. By leading the state to cooperate with federal programs and combat the Depression, he saw living standards raised for Texans, and his work was highly commended by President Franklin Delano Roosevelt.

On November 19, 1935, Governor Allred signed into law the first old-age assistance bill for Texans. During his tenure, social security amendments were added to the state constitution. He instituted aid to dependent children and aid to the needy blind. Having high esteem for education, as he had from childhood, he was glad to take the lead in setting up a teachers’ retirement fund, and to obtain fairer salaries for educators. He was also instrumental in setting up building programs for the colleges and other state institutions.

He sloshed in shoe top-deep mud over the neglected main road that led to Prairie View College, and became the first Texas Governor ever to visit there. (Later he saw to it that the road to Prairie View was paved!)

Governor Allred set up a Board of Pardons and Paroles to correct the outdated Texas system whereby, it was alleged, the selling of pardons had not always in times past been unknown in the governor’s office. He also instituted prison reforms.

During his administration the first securities regulation legislation was enacted in Texas.

Having a personal interest in all classes of people, Governor Allred signed into law the state’s first unemployment insurance measure. He improved facilities for public health. For the improvement of animal health and to increase the supply of good meat and milk for human consumption, he increased the funds of the Livestock Sanitary Commission.

It was during his leadership as Governor of Texas that drivers were first licenced in the state. The paving of roads was begun; the state began to administer motor bus regulations.

Governor Allred combined the Texas Rangers and the Highway Patrol, modeling the state’s enforcement division somewhat after the Federal Bureau of Investigation. He had come into office shortly after the ending of the Clyde Barrow gang’s reign of terror, and in the aftermath of violence in the East Texas oil fields. Much of the lawlessness had come under his scrutiny while he was Attorney General. As Governor he had more power to curb vice. This he did in the face of underworld threats to his young sons--James V., William David and Sam Houston--whom he had to place in seclusion on at least one occasion, when he defied gangland.

Although he loved horses, it was one of the proudest moments of his life when he put an end to pari-mutuel betting in Texas. He could not suffer the cries of little children whose parents wasted family funds in gambling.

Human strengths were to him the greatest resources in the universe, and it was his constant desire to see that ambitious and capable people found the opportunities they needed in order to serve the nation. He named to the judiciary in Texas its first woman member, Sarah T. Hughes, who later became a Federal Judge and the person who gave the oath of office to the 36th President of the United States, Lyndon Baines Johnson.

As a very young man, Lyndon B. Johnson had gone in 1937 to the Governor’s Mansion to seek advice about giving up his post as head of the National Youth Administration in Texas in order to run for the U.S. Congress in 10th District. Later he was to say to James V. Allred: “Governor, but for your help I would never have been elected to public office!”

The Centennial Anniversary of Texas fell in 1936, and Governor Allred took great pleasure in traveling and acquainting the world with the glories of this occasion. It was said of him that he liked crowds and parades, and all sorts of ceremonies that would serve to reflect credit upon Texas. The Centennial was a huge success, and to the Governor was due much of the credit for its splendor.

Shortly before Allred’s second term was to end in 1939, President Roosevelt appointed him to the Federal bench. He left that appointment to run unsuccessfully for the United States Senate in 1942, and was reappointed in 1949 by Harry S. Truman.

As Federal District Judge he felt deep concern for the people who appeared before him. He directed the probation officers under his jurisdiction to study these people as human beings; conferences in Judge Allred’s chambers often led to new lives for troubled people. He did not handle an interview as though it were merely between judge and prisoner but as between two immortal souls responsible to heaven.

While serving as U.S. Judge, Southern District of Texas, he died suddenly in Laredo on September 27, 1959. Funeral Services for him were held in Corpus Christi, in the State Capitol in Austin, and in Wichita Falls, where he is buried. He was a much beloved and a greatly respected statesman.

During the Texas Centennial he had spoken of his great personal commitment:

“I love Texas because it gave me the breath of life at birth; I love it because my forebears settled here 99 years ago and pledged their posterity to its service. I love it because of its romantic and historic traditions; because of its lands and its people; and because I believe it can be a greater Texas tomorrow and next year than it has ever been before, I want to see Texas grow and prosper; I want only to reflect credit to my native state.”