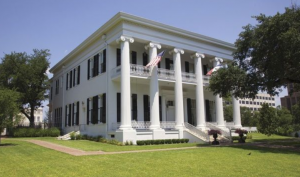 Robert Marshall Noe, Jr. (1905-1976) found himself among the many Texans traveled across the state looking for work during the 1930 Depression years.  Robert's grandson, David Noe, passed along this story: 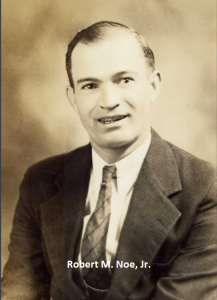 "My Paternal Grandfather, Robert Noe Jr., was a Third Cousin of Governor James V Allred.  During the 1930s, when JVA was governor of Texas, my Grandfather and his wife and family were on their way, on a trip, to south Texas.   They stopped in Austin at the Governor's Mansion and got to spend a couple of nights with JVA and his wife and young sons.   Although my dad, Robert Noe III was 6 at the time, it was quite a memory for him.   From what dad said, Grandfather and JVA spent most of the nights staying up and telling family tall tales.   Grandfather was on the hunt for a job (they were living in Denison, TX (Grayson County, TX), where many of the descendants of Renne Allred lived after he and his 2 brothers (Stephen and Elisha/Elijah) had settled in East Texas (the Carthage area).  Grandfather was out of work at the time (depression) and the car that he and dad were using was a borrowed car.   They did not have money for a camera, pretty poor."