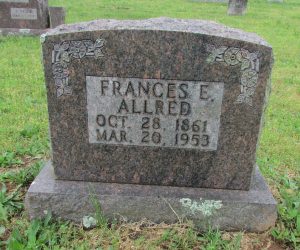 Note:  FindAGrave shows the tombstone for Frances Elizabeth Bartlett Allred 1861 - 1953.  Note the first and middle names are different than the story told by her grandson.  Which name is correct? 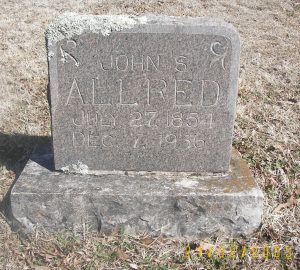 It seems that since the beginning of time man has constantly moved his civilization westward.  Society is indebted to those individuals of each generation who seek new frontiers and environments for themselves and their families.  This is a story about one of those individuals, William Turner Bartlett, who spurned security and position in an established community in quest of new environments for himself and his family.  This story is told by my grandmother, Mrs. John Allred, and aged and venerated lady today, who some eighty years ago was a little girl moving about the county with a pioneering father:

My story begins with the birth of my father, William Turner Bartlett, September 30, 1832, near the little town of Lewisburg, Tennessee.  Father was one of eleven children born to Sarus and Elizabeth Redford Bartlett.  He was born of parents who were of the old southern aristocracy and proud of it.  He was reared in an environment greatly influenced by his family and relatives.

Father was a little man of five feet six inches height and never weighed more than one hundred forty pounds.  He had dark hair and disarming blue eyes, and for as long as I can remember, he wore a beard.  What he lacked in stature he seemed to make up in energy and spirit.  His appearance was such that you never seemed to notice his smallness of  stature.

My mother, Elizabeth Brown Bartlett, was a tall red headed woman.  She was energetic and ambitious, and she too had an adventurous spirit.  She was an excellent housekeeper and took great pride in the appearance of herself and her family.

The moving that was evenutally to take my family into four states over a period of two decades, began sometime in the late fifties.  Father and Mother moved from Lewisburg to somewhere in Illinois soon after their marriage in 1856.  They were living there at the outbreak of the Civil War, but then they hurriedly returned home from the land of the "Federals".

In the year 1868, the year of the impeachment of President Johnson, the year of the election of Grant as President, and the year the people of the United States celebrated their first Memorial Day, we were living happily and securely on a farm near Lewisburg, Tennessee.  There were five children in our family then:  Will, myself, Mollie, Cynthia and Julia.  Will and I were going to school at the little one-room school at nearby Belfast.  Pa was a member of the local Masonic Lodge and he attended its meetings religiously.

Unusually when a husband and wife have been married twelve years and have a family of five children they are thinking about the security of their family; but not so with my father and mother, for they were thinking about new frontiers.  We had been hearing from the Biggers family, our relatives, who had moved to Marshfield, Missiouri, a few years previously.  They wrote of the wonderful oppontunities there.  Thereupon, Father and Mother decided that we would go to Missouri.

One Monday morning in October 1868, we made our departure for Marshfield, Missiouri, in company with the Mooningham family, the McKay family and the Glenn family.  The wagon train was conprised of eight covered wagons.  Each family had two wagons.

One of our wagons was drawn by two horses, Patsy and Mary; the other one was drawn by a yoke of oxen.  The ox team was driven by a teen-aged boy by the name of Johnny Brown, who volunteered to drive the team in order to make the trip.  The family rode in the horse drawn wagon even though it was well loaded with household equipment.  There were cedar wash tubs, cedar buckets, chairs, lanterns, and other things hanging from the sides of our wagons.

Our dogs, Cricket and Coley, were following behind the wagons.  Coley, a very old dog, left us the first night and we never saw him again.

Twenty miles a day were about all our teams could make and permit us to make our camp before dark.  Each family pitched a tent at night.  Our beds were made with quilts upon the ground.  Our victuals were cooked over an open fire and served from the vessels in which they were cooked.

Breaking camp was always done early.  The entire camp would arise before dawn.  the horses and oxen were fed while breakfast was being prepared. Immediately after breakfast, the tents were dismantled and loaded on the wagons.  The camp fires were extinguished and usually we were on our way soon after the break of day.

Saturday came to be known as wash day, as we only traveled five days a week. The women usually did their washing on Saturdays while the men attended to getting provisions for their families.  On one of these wash days at Pocahontas, Arkansas, Mother got her first washboard.  She was quite proud of it.

Sunday was believed to be the Lord's Day to these Puritanical pioneers and it was observed as such except in cases of direst emergency.  The fire wood for our camp fires was secured on Saturday to prevent doing that chore on the Sabbath.  Pa would usually get out the old family Bible and read some scripture.  The kids of the camp would assemble and play at various games. I remember playing with little Fannie McKay.

It was to our convenience to travel on a turnpike road, a toll road, through Tennessee to the Mississippi River.  Turn-pikes were not only better roads, they afforded frequent road markers to direct us along our way.   If we needed additional information we inquired at stops.

We crossed the Tennessee River on a flat and open ferry boat that was cared by men.  No doubt slaves had manned the oars of this boat only a few years before.  While camped on the banks of the Tennessee River, a fish peddler visited our camp and sold the camp fish.  The entire camp had one big fish supper that night.

All of us kids had anxiously looked forward to the crossing of the Mississippi River.  Pa had told us about crossing the "Father of Waters" some years previously.  When we came to the river I was excited and a little scared.  The river was swollen and quite muddy at the time.  Mother got a little scared too.  She was fussing at Father about being careful in driving our horses on the ferry.  The ferry was a steam powered ferry that could accommodate two wagons at a time.

It took most of the day for us to get ferried across the Mississippi, so we had to camp near the bank of the river.  That night it rained hard and the wind blew so severely that we had difficulty securing our tent.  It was still raining the next morning and our camp site was simply mud and water. It was decided that we had better be moving in a hurry.  Mother got excited again.  She was cautioning Father rather severely about getting us to safer grounds.  Through a driving rain, we moved as our wagons literally plowed
through the mud.

Six weeks after our departure, we arrived at our destination, Marshfield, Missouri, a tired and weary family, after having traveled some six hundred miles over all kinds of roads and through all kinds of weather.  We were happy because our journey was over and because we were reunited with our relatives in a new land.

Our happiness was short lived, however, we soon became homesick.  I think we would have returned home had not Father and Mother disliked the idea of admitting to their families that they had failed in their venture.

During the years we lived in the vicinity of Marshfield, Missouri, sickness and other adversities came to our family, but then too, the blessed events of Jim and Haseltine's births came to our family during those years.  It seemed that things just didn't go right .  We moved three times during the five years that we lived there.  Pa made two trips back home by himself on horseback.

Stories about hunting and the opportunities for homesteaders deep in the Ozark Hills had reached my Father.  In the year 1873 he began to talk and I suspect dream a little about the life of a hunter in the Ozark Hills.  Before long this talk resulted in plans for our moving to Newton County, Arkansas.

It seemed obvious from the time Father and Mother started planning this move that this was to be their last move.  Plans were made to take a little of everything needed to make a new start in the new land.  In addition to our household equipment, we took with us seeds, three cows, ten sheep, two hogs, two geese, ducks, and chickens.  With all of our earthly possessions, we set forth with the Constance family to find a new home.

Late that fall we arrived at our destination in Newton County, Arkansas.  We lived in an old cabin until we made our homestead.  The move from the old cabin to our nearby homestead was to be the end of our traveling.

That November day in 1873 when he moved to his homestead, Turner Bartlett might well have said "Oh, God! Let this family take root; it has traveled a far."  Here he was to live for a half century and see his family of nine children grow up and take root.