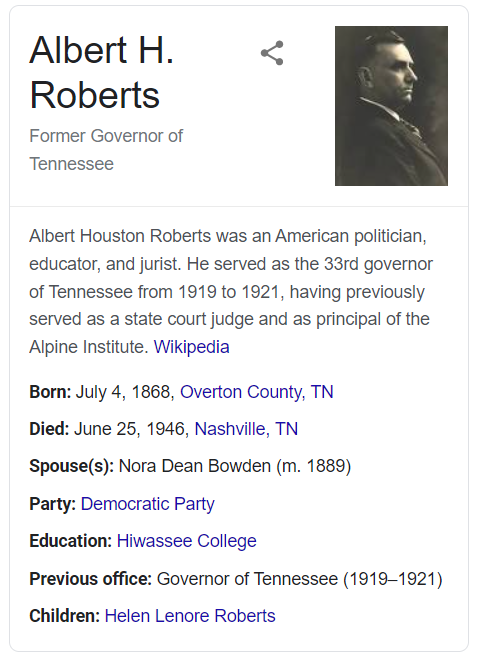 This letter mentions many members of the Allred and Linder families of Overton County, Tennessee.  To give you an idea of which Allred family, I am listing the Lineage of Nancy Allred who married Jesse Linder:
Lineage:  Nancy, Robert, Jonathan, Theophilus, Solomon, Solomon born 1680 Lancashire, England

Dear Madam:
Your letter of recent date would have been answered sooner but for the serious illness and recent death of my oldest son.

Relative to your family tree will say that Aunt Anne Allred was a Moredock (sometimes spelled Murdoch), before her marriage. She and my grandmother, Mahala Roberts, were sisters. My grandfather, Jesse Roberts, married my grandmother about 1834 or 1835. It is my understanding that Aunt Anne Allred was older than my grandmother. Your great grandmother, Aunt Anne Allred, had Charles Allred, who was killed by Bushwhackers in time of the Civil War and a son, John W. Allred, who lived until about twenty years ago, and was never married. She also had your grandmother, Nancy Allred, who married Jesse Linder. Of this marriage, your mother and J. W. (Will) Linder and Dock Linder were born. Dock was the youngest and your mother the oldest, is my understanding of the family. Dock was a nick-name; I have known his real name, but cannot recall it now.

J. W. Linder was one of the most prominent men in Overton County, [Tennessee] and was quite a wealthy man at the time of his death some eight or ten years ago. You probably know his children. I remember Aunt Anne Allred quite well, although she was very old when I first saw her, which was probably about 1874. I was born July 4, 1868, and our family visited with John W. Allred and his mother quite often, and I knew them well. She was an unusually intelligent old lady and was much loved by the public generally. Her son, John W. Allred, was a man of affairs, a prominent land
owner, and owned various mills, such as grist mills and other business enterprises. He was County Surveyor of Overton County for a good while, and was a man of splendid intelligence. He was a Mason and took a great interest in the Masonic Lodge, and attended on up to a short time before his death. He was a most excellent man in every respect.

In reply to your inquiry as to the time of my election will say that I was elected Governor in November 1918 and served one term.  If I can give you any other information about your family, I shall be glad to do it.

Very truly yours,
A. H. Roberts