Did Thomas Have More Than One Wife?

Despite many family histories and online sources claiming to know, the birth date of Thomas is unknown.  No documentation has ever been found (that we know of) proving when he was born.   No tombstone or family Bible record has been found.   Thomas wrote his will on November 8, 1809 and it was proven in Court during the May Session 1810.  By tradition, the family/executor went to court to prove the will and begin the estate settlement process as soon as possible after the death.  This tells us Thomas died sometime before the May session of Court 1810. Birth dates can be estimated by looking at the date of a man's first land record combined with the birth of his first child.  By law, men had to be at least 21 years old to own land.   Most men were 20 years old or older when they married and began having children.   However, it is not known when Thomas first owned land - the records no longer exist (are not on file in Orange or Randolph Counties, and are not on file in the NC Archives). unknown when he first owned land 1754     A letter written in 1719 by Thomas' father, Solomon, tells us Solomon was married and, therefore, most likely fathering children so it is possible Thomas is was born before 1730.  However, estimating Thomas was at least 20 years old when his first child was born, tells us Thomas was probably born around 1730, but that is just a guess. 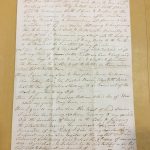 In the name of God Amen I Thomas Allred

of Randolph County and State of North Carolina being in a low state of health but of perfect mind and memory thanks be to God for it calling to mind the mortality of the body and knowing that it is appointed for all men once to die and touching such worldly estate as it hath pleased God to Endow me with I give and dispose of the same in manner and form hearin after mentioned hearby revoking and disanuling all former wills and testaments by me made allowing and confirming this to be my last will and testament principly and first of all I recommend my Soul unto the hands of Allmighty God who gave it to my body to the Earth to be buried at the discretion of my friends.

I give and bequeath to Elizabeth my well beloved wife all my stock of cattle (except one cow and calf) and all my hogs and sheep, and one bed and bedsted and furniture the dressors in the kitchen and all the articles on them and one iron pot and dutch oven Item I give to my sons and daughters James, William, Elias, John, Moses, Eli, Rachel Brown, Elizabeth Jones each the sum of twelve shillings to be raised out of the stock bequeathed to my wife. Item I give to my Grandson William Allred, son of Elias Allred my bay horse Iten I give to my son Levi the tract of land wherean I now live containing 150 acres reserving to my aforesaid wife the priviledge of living in the home and enjoying the plantation during her natural life and the remainder of my estate I give to my son Levi I appoint my son Levi Executor of this my last will and testament witness my hand and seal this 8th day of November 1809 signed, sealed and delivered by the said testator as for his last will and testament in presents of Joseph Allred

mark ******************** Original record did not copy well so we weren't able to post a copy at this time - but stay tuned.  Below is a transcription: State of North Carolina Randolph County May Sessions 1810 The foregoing last will and testament of Thomas Alred was duly proven in open Court by Joseph Alred and admitted to record. Teate:   Jesse Harper CC