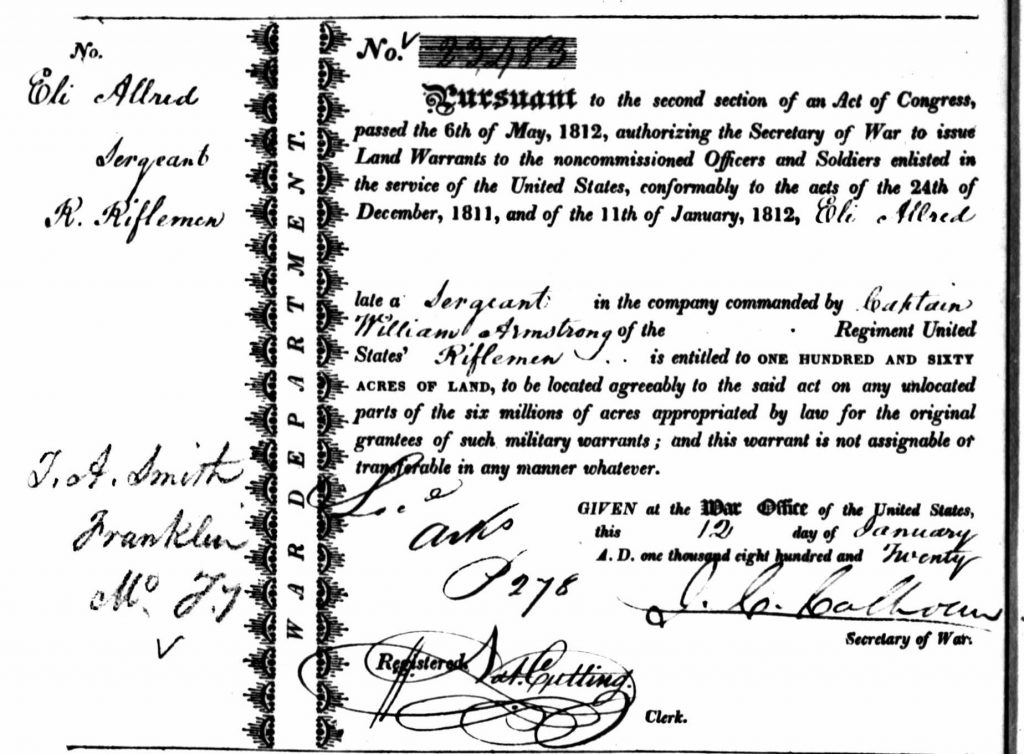 Eli is one of our Mystery Allreds.  To my knowledge, no one has documented who his parents were.  If you have documentation/information, please contact me.
by Linda Allred Cooper

A few short years after the American Revolution, Eli Allred was born in 1790 Randolph County, North Carolina. He remained there until November 5, 1814, when he enlisted for a five-year term of service in the U.S. Army. The War of 1812 had been raging for two years and the British had burned Washington D. C. in August of 1814. The United States forces were beginning to repulse the British, but the outcome of the War was far from certain when Eli enlisted. He was a 24-year-old farm boy, 5ft 5-6 inches tall, light hair, fair skinned, blue/gray eyes per the description on his enlistment papers. He had probably never left Randolph County or even wandered very far from the farm where he grew up. He would never return.

Eli’s identity has not been confirmed.  Several online sources claim he was the son of Eli Allred who was the son of Thomas Allred who died 1809 Randolph County. This could be true, but I was unable to find any documentation to prove it.  There were several Allred families listed in the 1790 and 1800 census who had sons about Eli’s age and it has been proven time and again that census takers made mistakes and, at times, left some families off the census for unknown reasons.  Perhaps the family lived so far off the beaten path that the census taker couldn’t find them. Perhaps the family was not at home when the census taker visited and he never had a chance to visit again.  Perhaps the family was not very keen on having their information recorded by the government.

Whatever the reason, I was unable to document who Eli’s parents were and found nothing on him prior to his 1814 enlistment.  Eli enlisted as a Private in the U.S. Riflemen Corps. His first post was near Richmond, Virginia. During the War, Virginia established
three militia posts on the outskirts of Richmond to guard against possible British invasion.  One of these posts was Camp Bottoms’ Bridge in Henrico County where Eli was stationed.  These posts were never threatened by the British but Eli obviously did something impressive during his stay because he was promoted to Corporal on February 4, 1815, around the time U.S. forces learned about the signing of the Treaty of Ghent which ended the War.

Eli remained with the army after the War as a member of the U.S. Army Rifle Regiment. By April 30, 1815, he was stationed at Carlisle
Barracks in Carlisle, Pennsylvania.  Following the War of 1812, the four Rifle Regiments of the US Army were consolidated into one, became part of the regular army and assigned to the Missouri Territory. By 1817 the riflemen had contributed to the construction of Fort Armstrong, Rock Island, Illinois; Fort Crawford, Prairie du Chien, Wisconsin; Fort Howard, Green Bay, Wisconsin and Fort Smith, Arkansas.  Eli was promoted to a Sergeant in 1819 shortly before his five-year enlistment expired.  While serving under Captain William Armstrong, Eli was Honorably Discharged at Canton, Missouri, on Oct 3, 1819.  Thus, Eli ended his military career without being involved in any battles and, most likely, the only action he saw was an occasional disagreement/skirmish with the local Cherokee or Osage Indians who resisted giving up their land to white settlers.

Eli disappears from records until August 19, 1822, when he received a Bounty Land Warrant for 120 acres in Arkansas. Based on
descriptions in the warrant, the land appears to have been located near today’s Batesville, Arkansas. However, I could find no land records proving Eli ever took possession of the land, lived there or sold it.  On July 2, 1823, Eli was in Court in Washington County, Missouri, accepting the job as Administrator for the Estate of John P. Webb.  Webb was also a former Rifleman so the two men
must have become good friends.

Sadly, Eli disappears from all records after 1823.  Some online resources claim he died in Washington County, Missouri, but I could find no documentation of this. He did have an exciting life, leaving home at age 25, traveling north then west to territory uninhabited by white men where he must have seen many wonderful and exciting things.