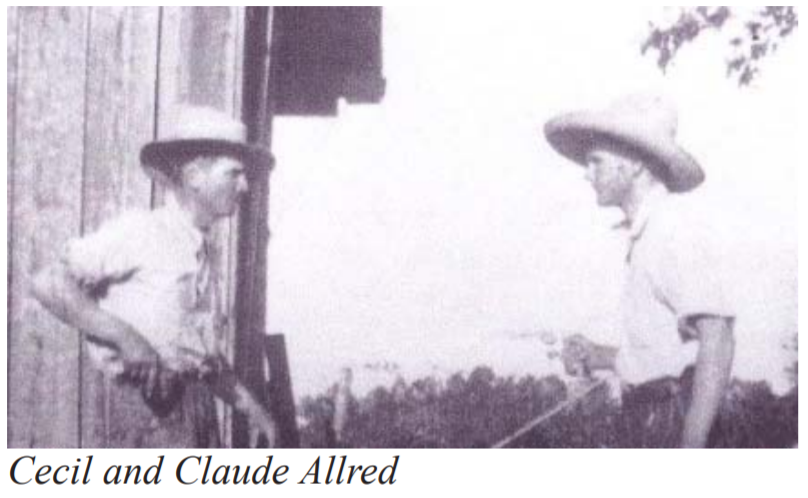 John Thomas Allred had eleven children—four girls and seven boys. Two of the older sons were Baptist ministers; but the two youngest, Cecil and Claude, were always getting into trouble.  Growing up during the Great Depression in the the 1920s and 1930s, Cecil and Claude learned to hunt, fish, and fight—enjoying all three activities.  At an early age, they would take the handles off
their mother’s #2 washtub and use them as brass knuckles. They soon gained a reputation of being ready to defend their honor at the drop-of-a-hat.  Cecil and Claude both married but never really settled down.

One night in 1958 at midnight, Cecil was asleep when he heard a noise in the kitchen. He quietly went to the kitchen and turned on the light finding himself standing toe-to-toe with an intruder. When the fight was over, the intruder had to be taken to the hospital for a two day stay.

A month later, this author was coming home from work when I found my driveway blocked by a police car. The policeman was crouched behind the car calling for backup on his radio. The policemen asked if I knew the man next door. I said, “Sure, it’s Cecil Allred—what’s the problem?” The officer replied, “I came to serve him with a warrant. I know he’s at home, but he won’t come to the door.” While the policemen was waiting for backup, I went to the back of the house and looked through the window. Cecil was in bed sound asleep. When I banged on the window, Cecil sat up and asked what the problem was. I said, “Come open the door. The police
want to talk to you.”

By the time Cecil opened the door, five policemen were standing behind me.  The officer explained he had a warrant for his arrest and would have to take him to jail.  Cecil said, “I called the chief of police and told him someone was going to take out a warrant against me and to give me a call and I would come down and take care of it.  O.K., let me get a drink.”  He poured a double shot of bourbon, drank it straight and said, “Let’s get this over with.”

Claude’s problems were more complex.  One night in a tavern (beer joint was what it was called in Georgia), Claude and an old acquaintance became embroiled in a heated argument which ended in the acquaintance going to the hospital emergency room for stitches for cuts he received. Several weeks later, the acquaintance sneaked up behind Claude and hit him in the head with a Coca Cola bottle causing a large cut in the top of his head. The next time they met, they decided to shake hands and become friends and settle down.

A few years had passed when Claude was called to be on the grand jury in the county of Alabama where he lived. On the docket was the incident where two of Claude’s neighbors were engaged in a disagreement and one dying from a gunshot wound. The Grand Jury returned a No Bill meaning that no one would be charged with a crime—which infuriated the victim’s family. They blamed Claude for the Grand Jury’s decision.  Returning from his job in Georgia, Claude decided to stop for a beer because the county where he lived in Alabama was a “dry” county.  Two of the victim’s family were also having a beer at the same place, They decided to confront Claude about the Grand Jury’s decision and a fight ensued. The tavern owner broke up the altercation and evicted the two family members.
Just before reaching the Alabama state line that evening, Claude found the road blocked by the vehicle of the two men from the  tavern. They leaped from behind trees on each side of Claude’s truck, jerked the doors open and attacked him with metal objects. Claude grabbed a pistol that was lying in the truck seat and pulled the trigger causing a bullet to strike one of the men. The wounded man screamed and staggered toward their truck. His partner helped him in and they sped off toward Alabama. Claude flagged down
the first car passing and asked them to notify the police to come to the scene where he would be waiting.

Later that night, Claude was arrested for the death of the man shot during the altercation.  The report filed with the sheriff’s office told a different story. Statements by the survivor said they were forced by Claude to pull over and, when they got out, he began shooting at them. He stated that when they jumped back in their vehicle, he realized his partner had been shot.  They drove home but decided to go to the hospital when the conditioned worsened. The doctor pronounced the victim dead from two gunshot wounds to the chest.

We decided it was time to find Claude an attorney. Because of my background and training in law enforcement, the lawyer asked me to assist him in gathering evidence needed for Claude’s defense.  Claude said he purchased the pistol last week and had never shot it before that night but was positive he only fired it one time. On advice from the lawyer, we decided to send it to the state crime lab for testing. The crime lab discovered that due to a manufacturing defect, every time the pistol was fired, enough heat was transferred to
the cartridge in the next cylinder causing it to explode at the same time—one bullet going out the barrel and the second bullet going out the cylinder simultaneously. This explained the two gunshot sounds. Also, a witness came forward and said he was stopped by the two men who he could identify and they told him they were waiting for someone and was going to teach him a lesson.  He also stated that he parked a short distance down the road, walked back through the woods and watched the whole episode.

So, this collaborated Claude’s version. What turned out to be the victim’s blood was found on the inside door panel of Claude’s truck.  Claude’s lawyer explained how the case would be processed in the courts. First, a hearing conducted by a justice of the peace where the prosecutor would convince him with enough evidence to go to trial. Then, we would counter with our evidence, but we’re not going to do that and here’s why. The Justice of the Peace would listen to both sides present their case, then say his decision is to let it go to jury trial, pound his gavel and walk out. What we will do is pay a court recorder to record the hearing so that any information we discover can be used at the jury trial. (See Note at end of this story)

We will make no effort to defend at this hearing and save everything for the trial before a jury. Everything happened exactly as planned. The lawyer felt with the evidence and after questioning the surviving attacker, all he needed to win was to prove the witness was lying and he was also a hothead. On the say the trial began, we were informed that the family had hired a lawyer to assist the district attorney to prosecute Claude.  As it turned out, this helped more than harmed the case.

When the witness who accused Claude of attacking them testified, the defense attorney questioned him and asked that he be excused for not but subject to questions later.  After the defense presented its case, the witness was called back for further questioning. The defense attorney leaned over and whispered, “This is where I trick the prosecutor and discredit the witness.” “Sir” the defense lawyer began.  “I’m uh trying to recall, but, uh, I think I asked you the, uh, same questions at the Justice of the Peace hearing and you gave different answers. Is that right?” The prosecutor leaped to his feet, not being aware that the hearing had been recorded and said, “I object. If the defense wants to refer to the hearing he would have to request it be entered as evidence” The defense picked up the document and said, “Your Honor, I would like this certified copy of the Justice of Peace hearing to be entered as evidence as the prosecutor requested.”

In both cases, the questions were asked in the same order with the exact wording, but the answers told two different stories. As the defense lawyer went over each question and answer, the witness became more and more upset, accusing the attorney of trying to confuse him. “I don’t think you’re confused at all, I think you’re a habitual liar, is that correct?  The prosecutor leaped to his feet, but, before he could object, the defense attorney said, “I withdraw the question.” Turned to the Judge, “The defense rests its case, Your
Honor.” The jury deliberated less than an hour and came back with a not guilty verdict.

Note: Discovery was not part of the process at that time