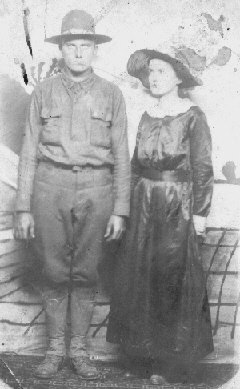 One of my favorite childhood memories is sitting in a rocking chair on the big front porch of my granny's house.  My grandfather O'Neal (his grandchildren called him Taw) had passed away when I was only 6 and I loved to hear granny's stories about their life together.  I would always ask "tell me again about how you met Taw".  The following is how I remember her story that she told to me so many times.  (Spelling and Grammar as it was told to me.)

I was 16 years old when they built the railroad track to Columbiana through my family's property.  My daddy, Zachariah Jr, told us kids that we would get a whopping if he caught us anywhere near where they was putting in the track.  Of course, I had to sneak off and see what they were a doing.  There was a bank up above where they was a laying the track, so I went up there and hid behind some trees to get a peek.  While I was there, I seed the best looking man I'd ever seen.  I only meant to go there that one time, but couldn't get him off my mind, so I just kept on a going back every day.

About the third day, I heard a noise behind me and it was him.  He said "I thought you might want to share my lunch with me".   After that I went back a few more days and had lunch with him and we got to know each other pretty well.  Then the track laying got past our property and I was afraid to go onto someone else's property. I knew if I got caught they would tell daddy.

I was real sad for the next couple a weeks.  Then one night there was a knock on our door and it was O'Neal.  Daddy answered the door and your granddaddy asked to marry me.  My daddy turned red in the face and yelled out at him "ain't no (insert expletive) Indian marrying my daughter" and slammed the door.

Well, I was mighty upset and told my cousin what had happened.  She and me, we plotted a plan.  When the track laying reached her family's land, she would go down and give O'Neal her address and tell him that I wanted him to write me letters.  I never learned to read and write so my cousin would read his letter to me and write down my letter to him and send it back.  This went on for 4 years and he and me made plans to marry when I turned 21.

Note:  I realize that there are mispelled words and other grammer mistakes, but I tried to write this in the way that granny talked and told the story to me.

Also, see the attached picture.  It is the only one I have of my grandparents when they were young and was taken when he came back from France at the end of WWI.