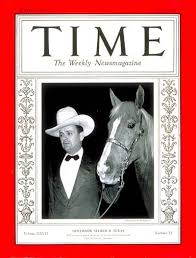 JAMES V. ALLRED was born in Bowie, Texas. He attended Rice Institute and received an LL.B. from Cumberland University in 1921. During World War I he was a seaman in the U.S. Navy. An attorney and businessman, he served as District Attorney of the Thirtieth Judicial District of Texas from 1923 to 1926 and as Texas Attorney General from 1931 to 1933. Elected governor in 1934, he focused on cooperating with the federal government to relieve the effects of the Great Depression. Although measures were enacted during his administration to provide increased financial support for education, expanded highway construction, and old age benefits, the state legislature declined to appropriate funds for the proposals. Leaving office after two terms, Allred was appointed to a federal district court judgeship by President Franklin D. Roosevelt. He left the bench to mount an unsuccessful campaign for a U.S. Senate seat. In 1949 he was once again appointed to the federal bench, this time by President Harry Truman. He held that judgeship until his death. He was buried in Riverside Cemetery in Wichita Falls, Texas.